Time zone in the USA: how to adjust to the time in the United States

The time in the United States of America is regulated by 6 time zones, while if you also count the annexed states and the various properties scattered around the world, you get to as many as 9 time zones. There knowledge of the time zone and consequently the current time in that state it is a lot important on a trip to the USA, especially when the tour includes the crossing of various states.

Initially, each of the federal states had full autonomy in deciding which time zone to adopt, as well as the possible application of legal and solar time. Now is the Department of Transportation that decides the limits of the time zone in the various states and observance of summer time.

There are also some States that adopt 2 time zones such as: Florida, Texas, North Dakota, Idaho, Kansas, Nebraska, Kentucky, South Dakota, Oregon, Indiana, Tennessee and Michigan. Therefore, when traveling or touring the United States it is very important inquire well in advance about the times adopted in the various areas.

Summer time in the USA

But there are some exceptions: Some states such as Hawaii, Guam, American Samoa, the territories of Puerto Rico, the Northern Mariana Islands and the Virgin Islands do not have daylight saving time. Arizona also does not adopt the oral bind except for the Navajo Nation area (Navajo Reservation).


Time zone in the United States

Let's see now what they are the 6 zones of the United States that adopt different time zones, what is the difference with the timetable in Spain and which States are part of it.

The time zone of the Eastern States is -5 hours compared to Greenwich Mean Time (UTC / GMT) and -6 hours compared to Spain. It includes approximately the Atlantic Coast States and the eastern two thirds of the Ohio Valley. The states that are part of this time zone are:

The Pacific States time zone is -8 hours from Greenwich Mean Time (UTC / GMT) and -9 hours from Spain. It roughly includes the Pacific Coast states, plus Nevada. The states that are part of this time zone are:

The Alaska time zone is -9 hours from Greenwich Mean Time (UTC / GMT) and -10 hours from Spain. This time zone includes the continental part of the state of Alaska, the coldest area in the United States.

The time zone of the pacific states at -10 hours from UTC / GMT and -11 from Spain. The area takes its name from the two areas that are part of it: Hawaii and the Aleutian part of Alaska. 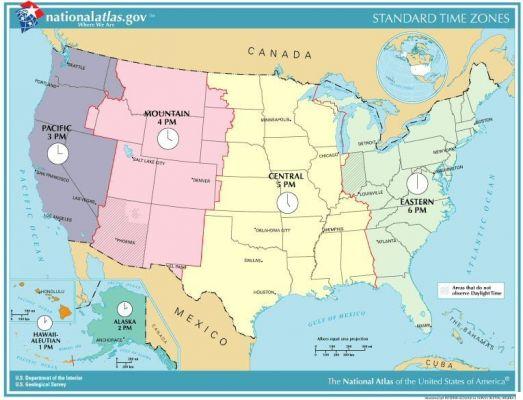 Time zone in the USA: how to adjust to the time in the United States - Image from Wikipedia
Gatorland Orlando: timetables, prices and how to get there ❯

add a comment of Time zone in the USA: how to adjust to the time in the United States