Jeju, the volcanic island in Korea 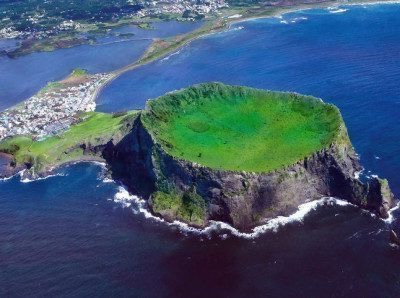 Jeju, a volcanic island 130 km from the South coast of Korea. The largest island in the smallest Korean province with an area of ​​1,846 square km. A feature of Jeju is Hallasan, the highest mountain in South Korea and an extinct volcano.

Jeju Volcanic Island and Lava Tunnels and is a World Heritage Site of South Korea. One of Jeju's main attractions is theHallasan, the highest mountain in South Korea and extinct volcano rising 1950 meters above sea level. Others 360 small volcanoes are scattered around the island. The last recorded eruption occurred 800 years ago. The island is covered with volcanic rocks. Baengnokdam, the crater and the lake inside, are located at the top of Hallasan.

Jeju is scientifically important for its lava tunnels, called Oreum in Korean. These natural conduits through which the magma flowed are nowadays empty caves, among the largest in the world. Caves offer the opportunity for scientific research and are popular tourist destinations. The numerous animals and plants present on Jeju are another reason that allowed the island to be transformed into nature reserve. Half of Korean plants grow spontaneously on the island, while another 200 Korean endemic species have been brought there.

The park is largely uncontaminated, equipped with paths forHiking and buildings for the management of the park, the only artificial objects in the area. Over 17 mammals, 198 birds, 8 amphibians, 8 reptiles and 947 insects have been found in the nature reserve.

One of the most famous points of Mount Hallasan is the Pillemot cave, a site dating back to the Paleolithic. The caves are also important for the archaeological remains found which would prove the existence of men who lived there during the Paleolithic.

Mood maps, the most original way to travel

Round the World Ticket: how to go around the world

add a comment of Jeju, the volcanic island in Korea