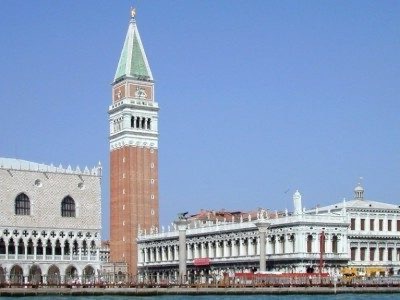 In St. Mark's Square among other beautiful structures there is also the St Mark's Campanile which was built starting from the ninth century with the intention of using it as an observation tower and lighthouse. The bell tower had its own belfry from 1172. On the top of the bell tower was raised in 1513 a golden angel, a rotating statue that moves according to the wind. August 21, 1609 Galileo Galilei he showed the telescope right from the belfry to the Signoria of Venice. The bell tower collapsed on the morning of July 12, 1902 without causing victims as at that time Piazza San Marco was free of people. It was rebuilt in just 10 years where it was and as it was and inaugurated on April 25, 1912, the feast of the patron saint of the city.

The Campanile di San Marco is tall 98,60 meters and has two distinct parts: the first, made up of bricks, measures 49,50 m., while the second, the upper one, forms the belfry. Inside they are placed 5 bells, the view of Venice that can be enjoyed from above is beautiful, especially during the beautiful days. The orari di apertura from October and November they go from 9 to 19, from November to April from 9.30 to 15.45, from April to June from 9 to 19, from July to September from 9 to 21. Ticket office closes one hour earlier. THE ticket prices full ones are 8 € while reduced ones are 4 €.

Venetians like to affectionately call this bell tower "el paròn de casa“, Or“ the master of the house ”. In ancient times, wine shops were placed around its base, covered by some tents, hence the well-known saying in the city: "Let's drink a shadow" (ie a glass of wine), as this was consumed in Piazza S Marco, in the shade of the tents and the great bell tower. From the belfry, at noon on the first Sunday of Carnival, the Angel Flight, giving the official start to the largest event in the city.

add a comment of St Mark's Campanile in Venice, information and timetables