Salto Angel, the highest waterfall in the world in Venezuela 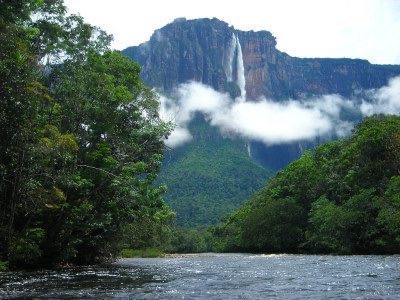 Salto Angel is the highest waterfall in the world, 1.002 meters high is located in the Canaima National Park in the state of Bolívar, on the border Venezuelan with Brazil. It is 19 times higher than Niagara Falls, with an uninterrupted 807 meter drop of water

The name comes from its discoverer, the American pilot, Jimmy Angel. The natives considered it a sacred place. The waterfall is located in the heart of the Amazon rainforest and to see it you have to make an excursion to two days across the river or fly over the area with small planes.

Its official discovery was in 1933 by an American aviator, James Crawford Angel, who was flying over the area in search of some valuable mining basin. Landed in his small plane, Angel's seaplane got bogged down on the muddy ground and remained there for 33 years before being taken away by a helicopter. Jimmy Angel and his three fellow explorers managed to descend Mount Auyantepui and reach the first civilized center only after 11 days. Jimmy Angel's airplane is exhibited in front of the airport terminal in Ciudad Bolívar.

The falls are one of the main tourist attractions of Venezuela. The total elevation gain is nearly 20 times that of Niagara Falls.

Reach the base of the falls it is not a simple thing, a plane flight is required, and the falls excursions are sold in an all-inclusive package which includes the flight by turboprop aircraft from Caracas, or Ciudad Bolivar, then you have to take a small boat, as the river route is the only way to reach the falls. But don't be scared, it is also possible to buy a package that includes only a simple panoramic flyover around the falls.

Audio Video Salto Angel, the highest waterfall in the world in Venezuela
Albania 5 things to know before departure ❯

Mood maps, the most original way to travel

Round the World Ticket: how to go around the world

add a comment of Salto Angel, the highest waterfall in the world in Venezuela