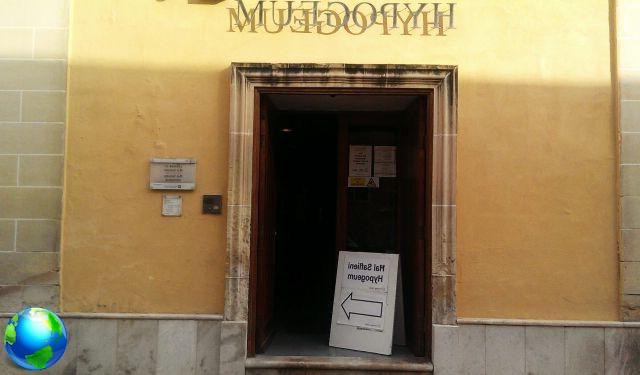 One of the things that most impressed me of Malta, was theHal Saflieni Hypogeum. I'm not saying that, absolutely. If you are planning one holiday in Malta, please, also include this beautiful historical site, it will be worth it.

The Hypogeum is located in Paola, not in a very central area then, but you can easily reach this area of ​​Malta via several buses departing from Valletta. The entrance to the Hal Saflieni Hypogeum doesn't seem to reveal anything special, but as always don't be fooled by appearances. Behind the main door you will find a priceless treasure, registered among the heritages ofUnesco since 1980.

Speaking immediately of the visit, I tell you that only they are allowed here 80 people a day and they can enter in small groups, to prevent this archaeological site from deteriorating and ruining. For this reason you have to make an appointment several weeks in advance for the visit. Just go to the website of Heritage Malta to reserve your seat at the times you prefer.

At the entrance you will be asked to put your bags and backpacks inside a secure closet. You will not be able to use the phone also because here it is It is forbidden to take any kind of photography. You will be given an audio guide of your language and you will have to follow the path that it will suggest. A guide in flesh and blood will stay with you all the time and more than anything else he will take care of making your way and controlling you, above all that you do not get hurt.


Il admission price for adults it is € 30, that for students and seniors is € 15, while children pay € 12. But what is so special about this Hypogeum to cost so much? Now I'll tell you.

What is the Hypogeum?

The Hypogeum came discovered in 1899 by some masons who were working on the current archaeological site. Since then, research has begun on this temple, which was originally thought to have been done by giants.

To understand the history of the Hypogeum, it is also important to understand a little about the history of Malta and how this land was formed. The first inhabitants of the Island of Malta came from Sicily in 5000 BC and in particular from the island of Pantelleria and Lipari. The times of Malta and Gozo, among which the beautiful ones stand out Temples of Mnajdra and Hagar Qim, they are still a mystery.

The Hypogeum has been defined as a temple for the dead, very similar to what is initially mistaken as a temple for the living. What it comprises of this construction is its precision and its design. The Neolithic workers in fact they had to work in the dark to build this work. In the Hypogeum they were found further 7000 bodies, bodies that have never been removed from under there, so much so that initially those who entered the Hypogeum found a decidedly acrid smell. The peculiarity of this place was that the bones were arranged according to the class and were found in the rooms of the stone idols depicting of female figures.


Le artificial caves carved into the stone they collected bones, which were often piled up randomly. While observing this place in very low light, you will notice that the caves that open behind, beside and below you, have openings, like small windows that overlook other caves. However, these openings are not level with the floor, but very high. Only recently has it been understood that the openings were made once the remains of people they reached that level. Once the cave was filled, a new hole was opened and a new cave was dug.

The halls of the Hypogeum

In the Hypogeum there is the Hall of the oracle, so called because of the hole at the back of the room which creates a thundering effect when a man with a deep voice speaks. Here there are some murals on the ceiling, better preserved than the others, which represent drawings made with red ocher, probably imported from nearby Sicily.

Finally the hall Sacred among the sacred it is the room that takes this name for its colossal sculpture, a room completely carved out of the living rock. The idea that the ceiling and the room itself gives us is that of a structure of a temple on the surface, while it is carved into the rock below the ground.

Central hallsfinally, it is also dug into the rock and is one of the most beautiful also because it has survived intact for 5000 years. Based on the daylight, the internal light of the Hypogeum the view one had of the place changed. When a room went dark, one gradually lit up.

It would certainly be wonderful to experience the sensation of walking through this place illuminated only by torches, as the Maltese did then. Certainly there is that guided tour does everything to recreate this atmosphere, and if you decide to visit the Hypogeum, you will discover it for yourself.

Malta: excursion to Gozo and Comino

The temples of Malta: Mnajdra and Hagar Qim

How to get to Malta low cost: Air Malta

add a comment of Hal Saflieni Hypogeum in Malta, a priceless jewel