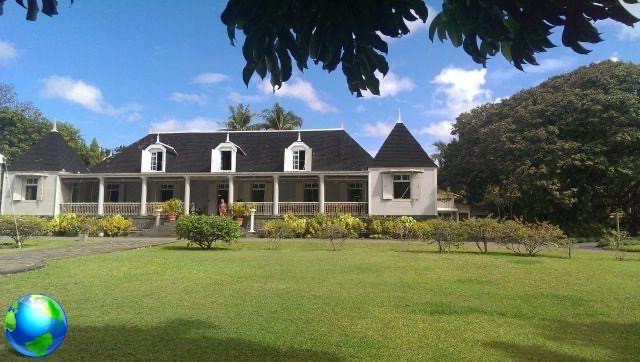 Mauritius it is a relatively small island. In fact, going from one part of the island to the other by car means "losing" no more than 5 hours. A relatively short journey if you decide to spend a week on the island and want to explore it at its best, perhaps alternating days of pure sea with days of excursion. Yes why Mauritius is not just the sea, but much more, let's find out together in this post.

Access to the botanical garden of Mauritius, to the SSR Botanic Garden, costs 200 Mauritian rupees, then about 5 €. In the Botanical Garden of Pamplemousse it is also possible to take a Mauritian guide who will explain to you in detail what types of plants and flowers are in the garden, accompanying you step by step on the excursion. In addition to trees and plants, there is also a beautiful area of ​​water lilies and ponds and a small animal park, where among other things there are turtles, the oldest on the island is over a hundred years old. The botanical garden was born about three centuries ago thanks to Pierre Poivre, the governor of the island of Mauritius on behalf of the king of France. In 1770 he created what are known today as i Pamplemousses Botanical Gardens with its 37 hectares covered with over six hundred varieties of trees, flowers and plants.

In Mauritius they are six Creole houses visitable and of these I have only seen three. Of these three the most beautiful that has remained in my heart and the one I recommend is Eureka. This house is owned by a family of farmers from Brittany. Eureka is a 800th century colonial house that offers infinite emotions. Each room is a blast from the past and I recommend you visit this one over the others for the excellent guide found here but also for the details and interior finishes of the house.

In the capital of Mauritius, in Port Louis, there is a splendid market, a huge and colorful market. The market is divided between fruit and vegetables, clothes and clothing or gifts, fish stalls and meat stalls. The Market is located in Corderie St, very close to the coast. A trip to the Port Louis market is worth it because that is how you really see it how people live, you see what they eat, how they buy products, how they bargain and how they sell. From markets around the world we often understand a lot more on a culture that from many other aspects, in my opinion.

Mauritius, a trip to the rhumerie

Mauritius: Chamarel, three areas not to be missed