The Great Wall of China: which traits to see starting from Beijing


The Great Wall of China is 6500 to 20000 kilometers long, its actual length is still uncertain. Of the Wall, the Mutianyu section is considered one of the most beautiful.

According to the Chinese, he is not a real man who has never climbed the Great Wall. 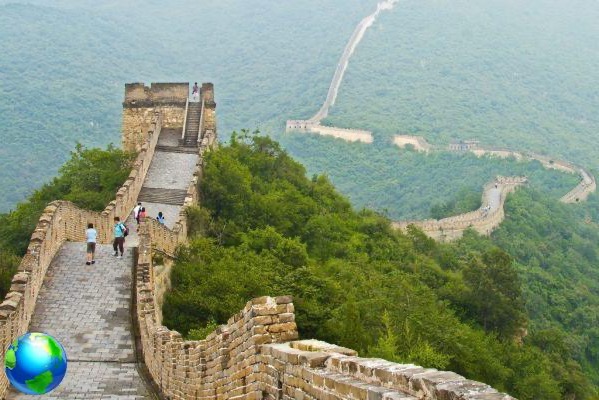 Huge architectural work, colossal defensive project often revealed as fragile in the face of external attacks, fascinating testimony of uninterrupted dynasties of emperors as well as incredible proof of human effort, the great wall is something that leaves you speechless and its vision can only exceed all expectations .

Although little remains of those original walls dating back to first centuries before Christ, destroyed by years of neglect and by now become impracticable - albeit extraordinarily suggestive - there are various segments that can be visited where even the sensation of stepping on a few kilometers of the approximately 10000 that make up the work in its entirety (the length is still uncertain, the hypotheses they go from 6500 to 20000 kilometers) is so strong that it leaves the visitor hanging on a feeling of amazement and wonder that will pervade him throughout the visit. 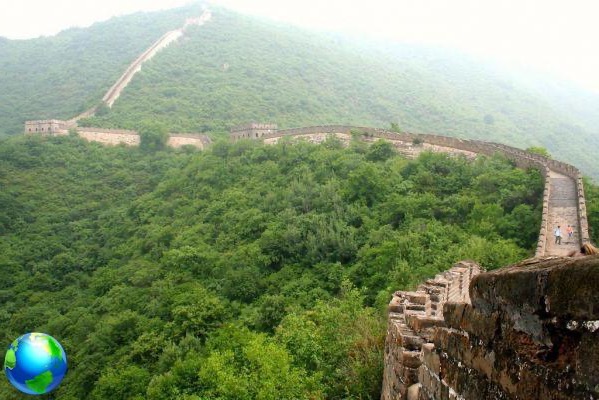 If you want to visit one of the more wild and less touristy sites of the Great Wall, you have to get away from Beijing. The sites of Jinshanling e Simatai they offer long walks, trekking between more steep and barren areas and also the possibility of staying in tents during the night. These are parts of the wall that have not been restored and therefore in some cases you need to be more experienced hikers to tackle rather uncomfortable paths and climbs.

I two sites closest to Beijing instead, great for an excursion suitable for all, often organized by many cheap hotels in Beijing for approx 35 euro per person including lunch and guide, they are mostly restored and made more touristy by the advent of stalls and means of transport that allow you to reach the top without too much effort. Despite this, as we will see, nothing can deprive the Great Wall of its charm. 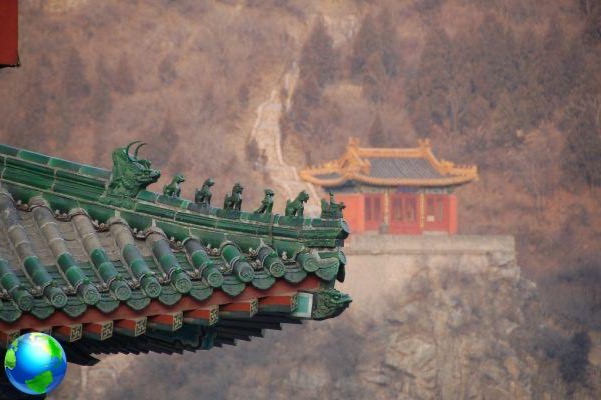 The site I'm going to talk about today is that of Mutianyu, just 90km from the center of Beijing, the second closest to the city after Badaling, which is now the most touristic and crowded part of the Great Wall of China. If you want to organize a trip to the Great Wall from Beijing, Mutianyu is a good choice because even if busy, the site never matches the crowds that can be found in Badalin. Furthermore, Mutianyu is off the beaten track, which includes stops in souvenir shops and more, so often the tours organized by hotels for this destination include nothing but the Great Wall, avoiding unpleasant demonstrations for sales purposes. However, ask at the reception if the tour includes shopping or not, or opt to reach the wall by taxi on your own.

Mutianyu is a largely restructured segment, about 2 kilometers long, with 22 lookout towers, accessible to all those who have good legs and good breath, but not only. 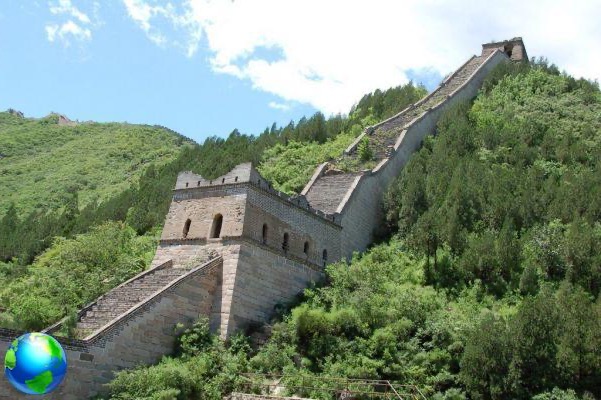 The Great Wall at Mutianyu begins to amaze as soon as you spot it from afar. A sort of frame that emerges from the top of a not very high mountain, as if it had a jagged profile instead of a straight one. Arriving at the base you are anxious to go up, often neglecting the fact that it is not a walk in the lightest sense of the word. However, there are two ways to climb the wall in Mutianyu without effort: a gondola that will take you up to one of the first watchtowers, or a chairlift that will take you to the top anyway, about halfway through the total walkable distance. If you want to enjoy the walk between the ramparts and on the wall, it is advisable to take one of these means to climb, so as to concentrate more on the walking route once you reach the top.

The chairlift is very fun, perhaps not suitable for those suffering from vertigo, as it allows you to see the valley below and enjoy the approach to the wall that gradually becomes more and more visible and imposing. Whether you get to the top on foot or with help, the view will be unparalleled. A long expanse of stones with battlements on the sides of the walls, interspersed with watchtowers on which you can climb to enjoy a view not to be missed. From above, in fact, the Great Wall looks almost like a snake that winds its way through the folds of the mountain, almost a Chinese dragon wrapping the horizon. 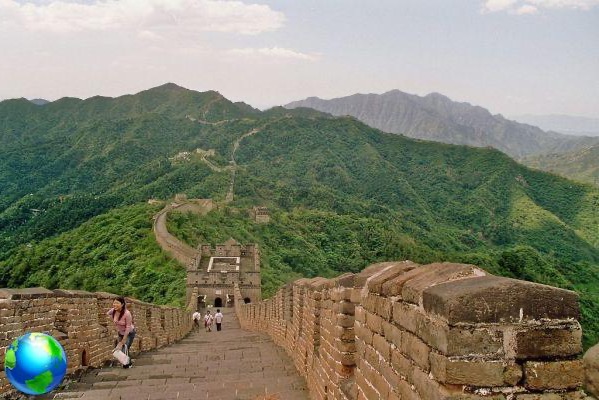 Despite being renovated, it does not lose its charm. Despite being crowded at times, it is never too crowded to feel its ancient soul, to realize that you are in a special place. Two kilometers don't seem like a lot, and at the beginning of the journey everyone is energetic and willing to complete it. But the road will turn out to be a continuous ups and downs, the one that gives the characteristic shape to the Great Wall, and often the sections are steep, with many narrow stairways.

In any case, it doesn't matter to walk it in its full length. Whatever stretch you choose to do, take it slow and let yourself be enveloped by its atmosphere. Think about what you are trampling on, think about how long it took to build it, think about how many years and centuries of history have come and gone in that place. Climb the watchtowers and lose yourself in the unique panorama that will appear before your eyes. 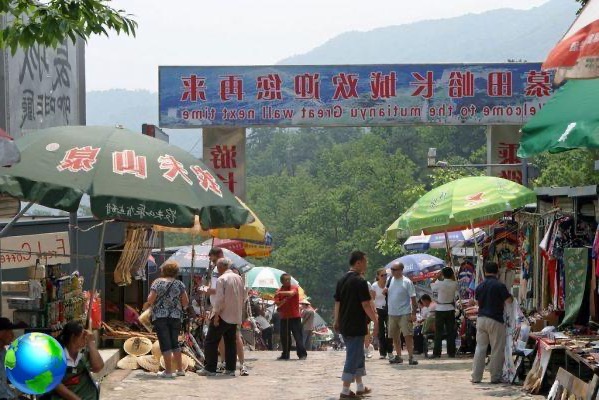 Getting off is much easier, however you may want to try the adventure of a much more fun and reckless descent. In Mutianyu, to go down to the valley from the Great Wall, is possible to take the Toboga, a huge winding slide that reaches the bottom of the valley covering the same distance traveled by chairlift and cableway. You go down with a kind of sled, which has a manual brake that can be controlled during the descent, so you can decide how fast you slide. There are people along the way who make sure that the flow of people slipping never stops, and this is very useful, because from the chairlift going up it is easy to see frightened people who pull the brake to the maximum to go slowly but risk blocking who comes after them!

At the entrance or exit of the Great Wall, the stalls of Street vendors are now many. However, prices are naturally higher than in other places or in the city of Beijing. The fact remains that it is possible to negotiate and by dealing tenaciously you can always get great deals. 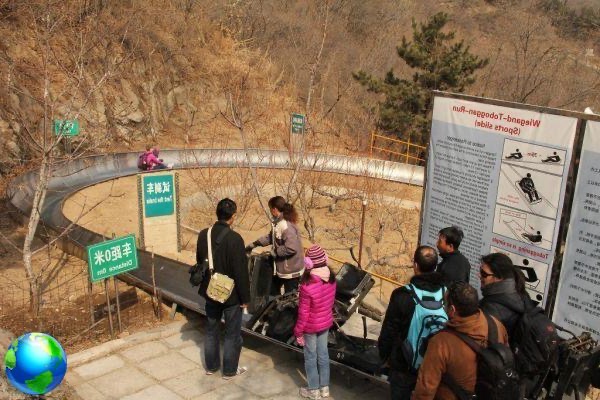 The Great Wall is open every day of the year in Mutianyu, it is advisable of course to avoid weekends and holidays to enjoy them in greater tranquility and solitude. The entrance hovers over the 5 € about. What is more expensive, compared to Chinese standards, is the ascent and descent by chairlift or toboggan. Often these are not included in the organized tour and can be done at the discretion of the individual traveler. Combined tickets that include an ascent and descent with one of the two means of your choice cost about 15 euros per person. The cable car is slightly more expensive.

Audio Video The Great Wall of China: which traits to see starting from Beijing
Vienna capital of culture and Pflasterspektakel ❯

Beijing not to be missed: Bell Tower and Drum Tower

Beijing not to be missed: the Forbidden City

Shanghai: what to do in 5 days

add a comment of The Great Wall of China: which traits to see starting from Beijing