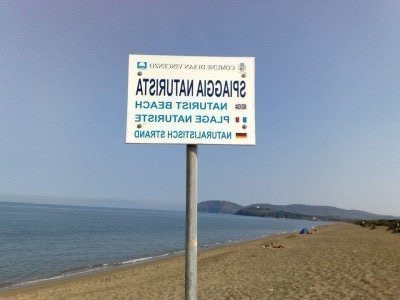 Il nudism is stated in Italy at the end of the 20s, although with the arrival of Nazism it was banned until 1933. After the war the movement resumed its spread, spreading also in France and England. Today I'm over 30 nations which have their own federation, including Italy and about 20.000.000 naturists declared all over the world, as many as 600 official accommodation facilities.

In Italy the nudist beaches are located in different regions, here we see 5:

Tuscany.. From Livorno, with the localities of San Vincenzo and Nido dell'Aquila, of Sassoscritto and Marina di Bibbona, to the Island of Elba, to the Grossetano areas, from Marina di Alberese to Capalbio, from Castiglione della Pescaia to the Argentario and finally for Torrente Diaterna.
Liguria. Chiavari beach and the localities of Guvano and Tellaro in La Spezia.
Trentino. Even without a beach, Trentino offers nudist areas between Lake Terlano and the Torrente Leno area, near Rovereto, or between Lake Caldonazzo and Garda, in the Tempesta area.
Walk. Here there are two of the most beautiful beaches in the Adriatic, that of the Sassi Neri near Sirolo and that of Portonovo, in addition to the southern area of ​​Portorecanati, in the province of Macerata.
Sicily. The town of Torre Salsa, in the province of Agrigento is intended for nudists and nature lovers.

add a comment of Nudist beaches in Italy, 5 Regions involved