A trip to southern Sardinia to discover Sulcis and Iglesiente

When you are talking about Sardinia everyone immediately thinks of the beaches of the Costa Smeralda. Obviously Sardinia is not only this (even if, as I always say, it undoubtedly has the most beautiful sea in the world!). Sardinia is a region that has many faces and many identities that unequivocally distinguish the various areas of the island.

Last October I was lucky enough to participate in a Fam Trip in southern Sardinia organized by Visit Sulcis and I visited for the first time a part of the island that I did not know and which, I must admit, impressed me a lot. Predominantly mountainous, the south of Sardinia it offers many different landscapes (and experiences): it has wonderful beaches, dense forests, caves, long stretches of unspoiled coast, remote mountain villages, ancient nuragic sites, many mining sites and several beautiful museums. If you are not only interested in beach life (which is still spectacular as in the rest of Sardinia) and you are looking for an area where you can do a little different activities, perhaps not very touristy and still authentic ... the south of Sardinia is just what it does for you!

Sardinia also has a warmth and a way of welcoming visitors that is rarely forgotten. The Fam Trip was one of the most beautiful ever for me, it was like being in the family and, in addition to the indisputable beauties I visited, it gave me new and important friendships. The only 'negative' note are the pounds I took !! If you ever make this trip you will immediately learn that you cannot say no to a Sardinian because he will be offended to death. Wherever you go they will offer you every good thing and you can only give thanks and eat. These are sacrifices that someone will have to make while traveling, right?!?

You can always go to Sardinia because, even in winter, there are often beautiful sunny days and it is never particularly cold. August is clearly the hottest, busiest and most expensive month, but it's not off limits like other areas of Sardinia. June, July, September and October are quieter and you can swim without problems. 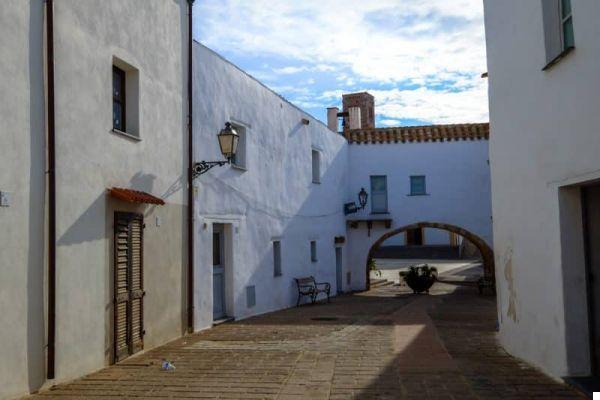 What to see in southern Sardinia

1.Carbonia and the mines of Serbariu

You can't say that Carbonia is a beautiful city, but it can certainly be said that it is a unique and particular city. Carbonia was built in 1937 following the fascist policies of self-sufficiency of raw materials and energy resources. It was therefore born as a working-class city to house the workers who worked in the nearby Sebariu coal mine. The first phase involved the construction of 10 workers' hotels with vegetable gardens, then in 1938 the design of the "great Carbonia" began, destined to accommodate 50.000 inhabitants by 1945. The city revolves around Piazza Roma, a kind of cathedral in the desert, built to represent fascist power; here is the Casa del Fascio, the dopolavoro, the church, the town hall, the lictorian tower and the company shop. It is worth visiting Carbonia to get an idea offascist architecture, but above all to see the Coal Museum housed in the old Serbarium mine (discontinued since 1971). Here you can learn about the history of the mine, see the tools they used, relics and documents from different periods of activity. The tour also includes the underground tunnel, with various tunnels that allow you to retrace the tiring and dangerous work of the miners who worked for years over 100 meters underground. And if you are a fan of photography and industrial archeology, you can't not go! 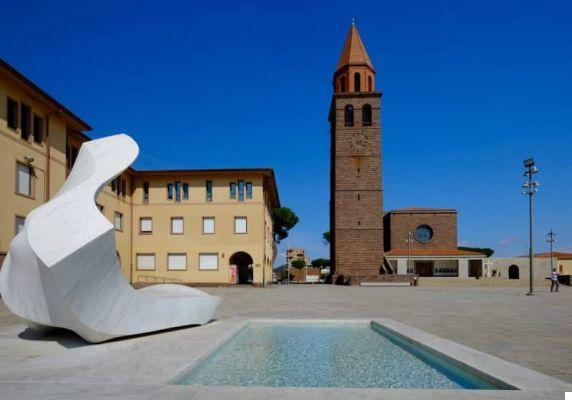 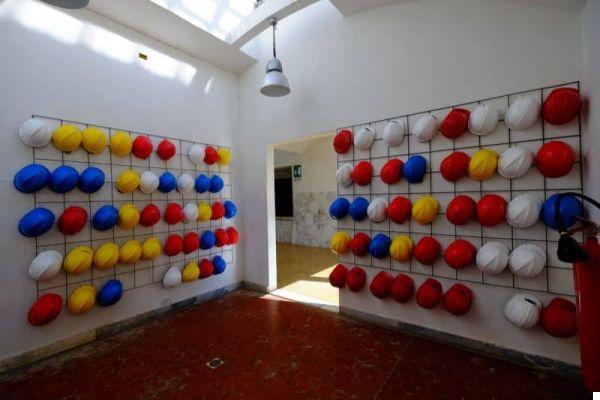 A few kilometers north of Carbonia there is the plateau of Monte Sirai, inhabited since the Neolithic age thanks to its excellent location. The advantages of this strategic position are evident: from a height of almost 200 meters the view sweeps over the sea and the surrounding lands to the islands of Sant'Antioco and San Pietro. At the archaeological site, tombs of two large phoenix necropolises and some of these are accessible. The best time to appreciate the view is the sunset. Not far from there, and always in a strategic position, there is another important nuragic site, that of Pani Loriga, near the village of santadi. The latter is also famous for 2 reasons: 1) the most prized wine of Sardinia is produced here, the Carignano del Sulcis, DOC wine; 2) the first Sunday of August takes place there Mauritanian marriage, the reconstruction of a wedding ceremony that is said to date back to an African settlement in Roman times. 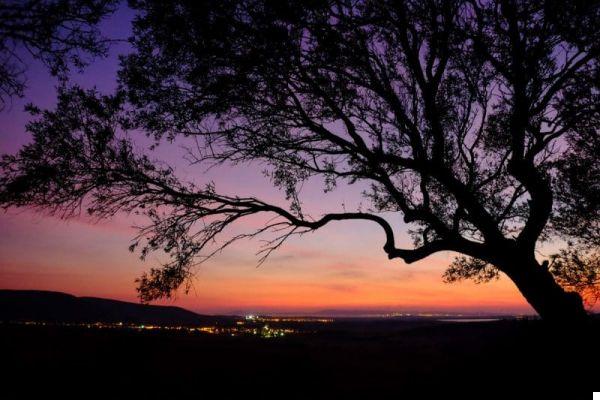 Not far from Santadi you can visit the spectacular Caves of Is Zuddas. The guided tour lasts 1h and we visit the main chambers of the cave system that is located under Mount Meana. Of course there are stalactites and stalagmites, but above all the delicate one white aragonite, which looks almost cotton wool. The caves have a temperature of 16 ° throughout the year. 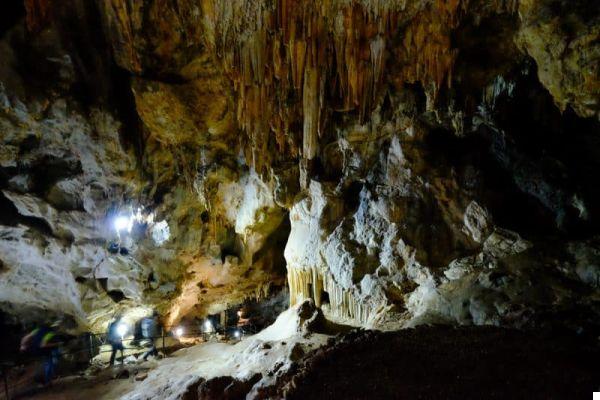 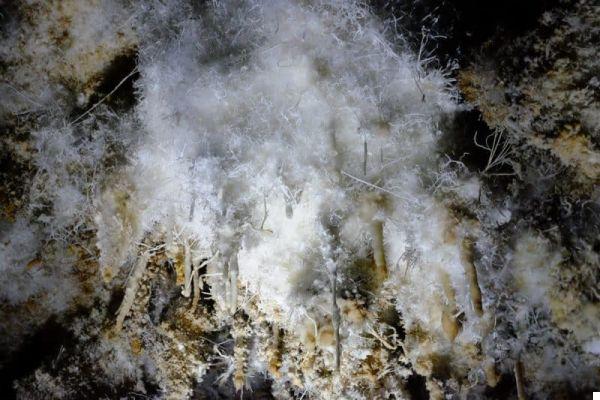 As for the rest of the region, the south of Sardinia is no exception and has some dream beaches where you can relax in the sun and swim in the crystal clear water. Starting from the south, the most beautiful are certainly there Nora beach (in Pula, very crowded in summer), le Chia beaches (above all On Giudeu, which has behind the lagoon where you can spot the flamingos), the Tuerredda beach, Porto Pino with its magnificent dunes and the pine forest behind, to finish with Cala Domestica e Pools, on the Costa Verde. Kite and wid-surf lovers will have to go to the Portobotte beach, where these sports are practiced all year round and where there are also several schools. 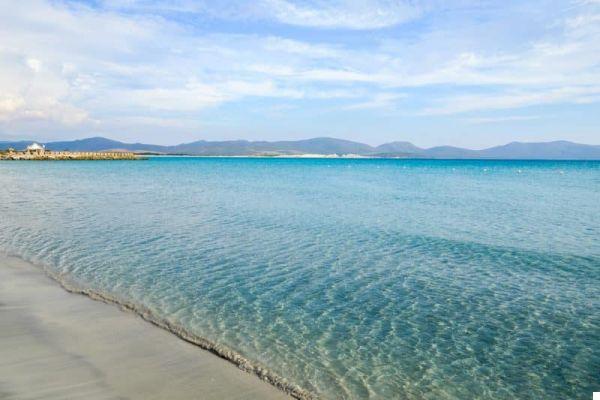 5.Iglesias and the Temple of Antas

The village of churches it owes its name to the numerous churches, many of which still survive today. However, its existence has always been linked to mining activities. The city was founded by the Pisan count Ugolino della Gherardesca, who in the XNUMXth century reactivated the ancient Roman mines. At different times, gold, silver, zinc, iron and lead were mined here, so much so that Iglesias became the main mining center of the island. Today it is one of the liveliest towns in South-Western Sardinia, also thanks to the university that attracts many young people. There is the beautiful one to see Town Hall Square with the Cathedral (the Cathedral of Santa Chiara), but above all the pedestrian alleys of the historic center. Going north, along the scenic state road that goes towards Fluminimaggiore, the Temple of Antas, a Roman place of worship, built on the site of a Nuragic and then Carthaginian sanctuary. At sunset from here you can enjoy a beautiful view that reaches the sea. 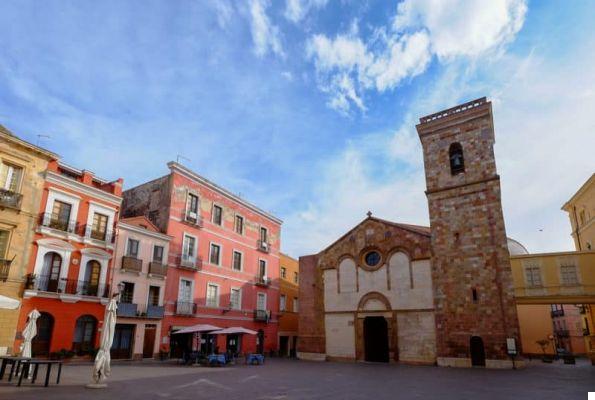 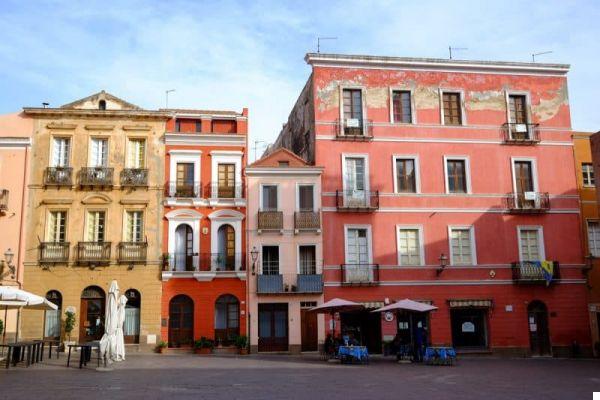 6.The Iglesiente coast: the Sugar Loaf and Porto Flavia

The stretch of coast around Masua is one of the most beautiful in southern Sardinia; the panorama is dominated by the colossal rock called Sugar Loaf, 133 meters high (it is the highest rock in Europe), and the road runs along the cliffs overlooking the sea. Here too there is no shortage of mines and that of Porto Flavia it is absolutely not to be missed. The latter was built in 1924 overlooking the sea by digging the interior of the mountain for 600 meters and revolutionized the system of loading minerals; from here they were loaded directly onto the boats and could be transported much more easily. 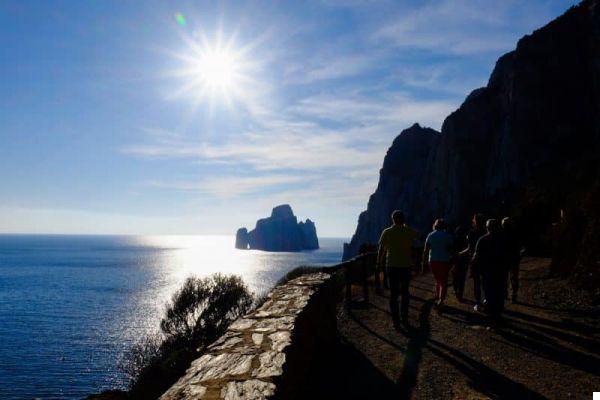 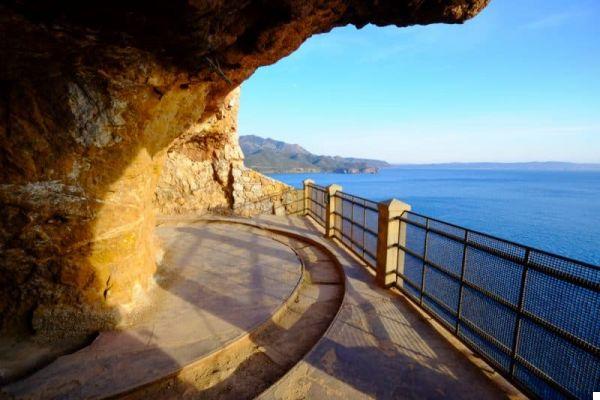 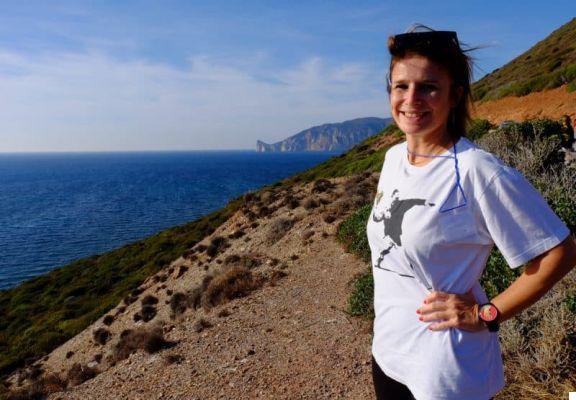 Tratalias it is a very suggestive small village which is located a few kilometers from Carbonia. The village was abandoned in the 70s due to water infiltrations caused by the artificial lake of Monte Pranu and the entire population of the old village was moved to a new village a few hundred meters away. Today the old village it has been renovated and there are some in the houses artisan shops who have taken up the ancient methods. Here you can see the processing of flax from seed to fabric, the artisanal extraction of mastic oil, the making of hand-forged knives, and several other techniques that have centuries of history. Also the beautiful Romanesque church of Santa Maria in the center of the old village, consecrated cathedral in the Sulcis region in 1213 and perfectly preserved. 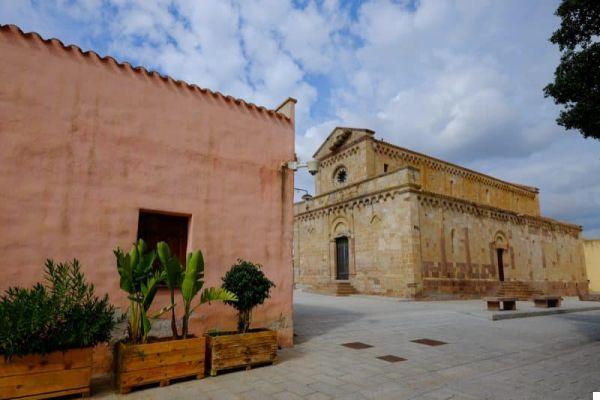 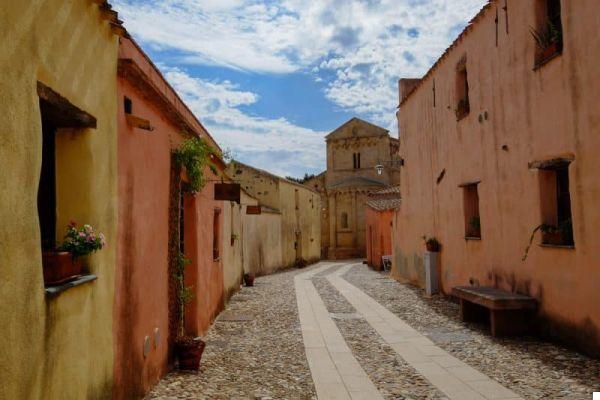 The country of portoscuso was born in the XNUMXth century near a Spanish watchtower (which is still in excellent condition) which served to control the maritime route between Calsetta and the island of Carloforte. It was born following the construction of the tonnara di Su Pranu, which is one of the oldest and most important in Italy (dates back to 1594), as a village of Sardinian, Ponza and Sicilian fishermen dedicated to tuna and coral fishing. The town is nice and characteristic and the tonnara is really beautiful and evocative. The latter is divided into two parts: a large central space once used to prepare the nets and as a storage for boats, and a large building on two levels. Built according to a well-defined hierarchical scheme, in the upper part of the building there was the main part, then that of the direct collaborators (Rais, Vicerais and Guardiano) and, in a peripheral position, the houses on the ground floor, "Is Barracas", residences of the tonnarotti who made up the crew. 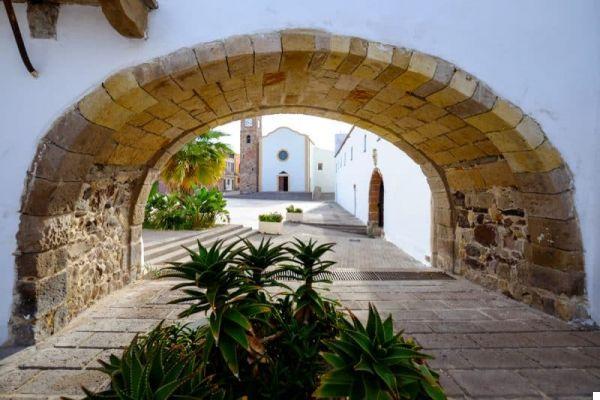 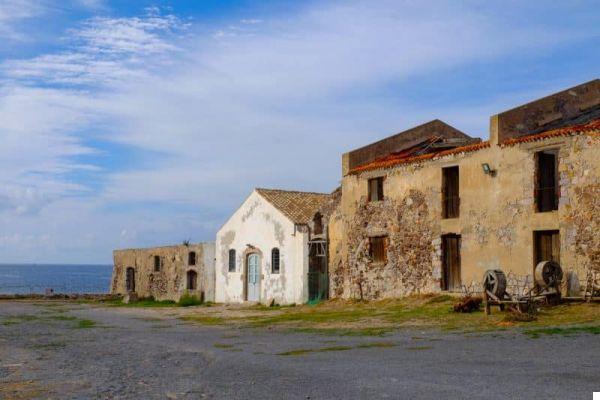 THEisland of Sant'Antioco it is joined to the mainland by an isthmus of 3 km along the coast and the elevated road to reach it has existed since the times of the Carthaginians. 16 km long, it has a bit of the charm of out-of-the-way places and the most interesting sites are concentrated in the town of Sant'Antioco. Absolutely not to be missed Basilica of Sant'Antioco with the Christian catacombs, the new MAB (Ferruccia Barreca Archaeological Museum) and above all, the archaeological area. Right next to the MAB there is the sacred area called tophet, an open-air sanctuary consecrated to the gods Tinnit and Baal Hammon, in which the Phoenicians and the Punics buried the cremated remains of children born dead or died at an early age with particular rituals. The archaeological area is very well kept and is a very special place: I had never seen anything like it before! 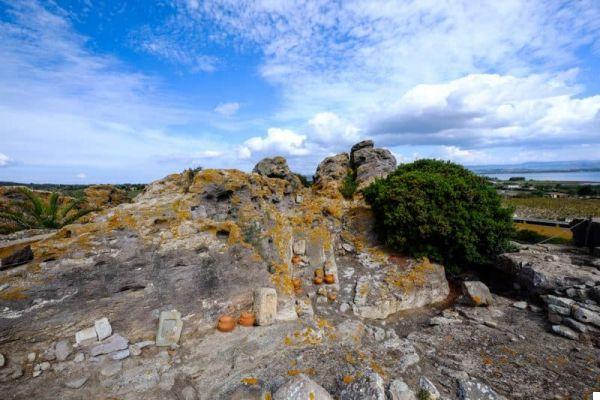 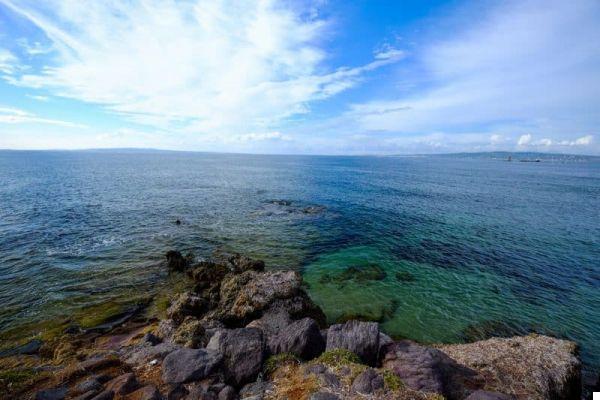 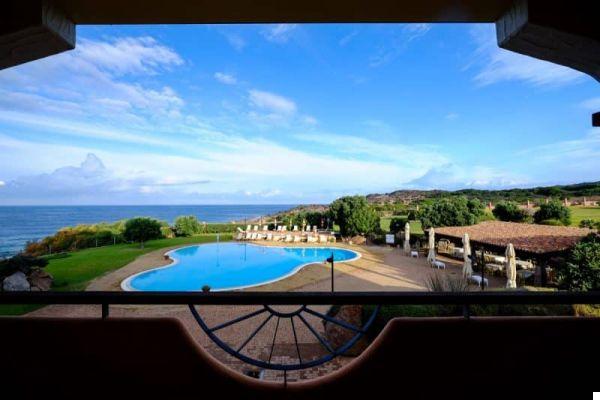 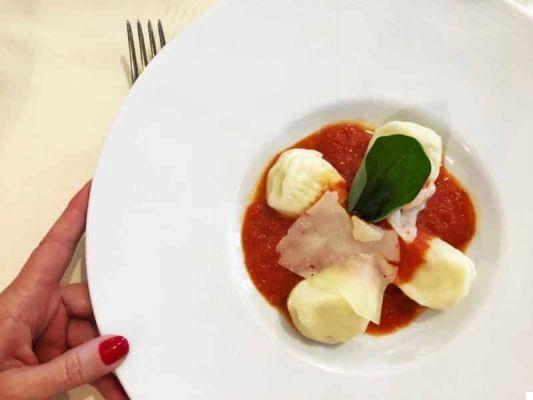 A weekend on Lake Garda between wellness, history and good food ❯