A weekend on Lake Garda between wellness, history and good food

If there is one thing I love about Milan it is that it is close to everything, the sea, the mountains, and the largest and most beautiful lakes in Italy and in October I decided to take the opportunity to spend a beautiful weekend on the Lombard shore of Lake Garda (which I had never visited before).

Il Lake Garda it is so big that looking at it it almost looks like a sea and the Lombard shore offers, in a few kilometers, attractions and glimpses of rare beauty. There Brescia coast it is the "rich sister" of the lake and the whole area that goes from Manerba to Salò and continues up to Riva del Garda it is scattered with holiday resorts from other times where you can still breathe the splendor of the late nineteenth / early twentieth century. There are many things to see here, but I will limit myself to mainly telling you what I managed and seeing in a weekend (with a couple of alternative proposals). 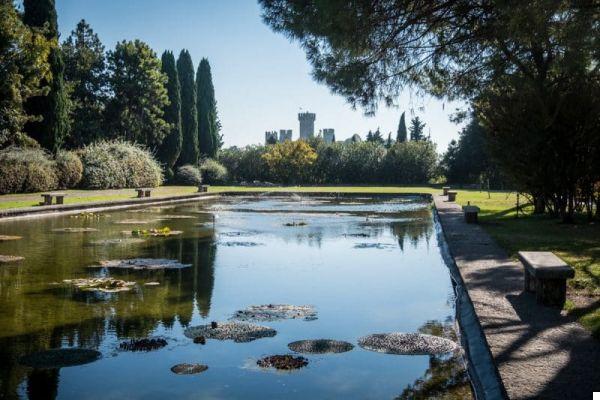 Where to sleep on Lake Garda

Do you agree that you need to pamper yourself a little from time to time? As you know I am a big fan of hostels and low cost travel but every now and then I need to recharge my batteries and I chose the Grand Hotel Fasano because it has all the credentials for those who want to spend a weekend of relaxation and good food.

The Grand Hotel Fasano is a historic hotel, D'Annunzio, Klimt, Heyse and many other illustrious figures of European culture stayed here, and made his own in 2018 130 years in business. Today the hotel, managed for three generations by Mayr family, it's a 5 star luxury property seasonal (it is open from April to early November), equipped with every comfort you could wish for: restaurants, bars, beach clubs and a large SPA with indoor and outdoor pools inspired by the Roman baths. Fortunately, the various renovations, which have taken place over the years to adapt the structure to current comforts, have not in the least affected the ancient charm of the place and the air of yesteryear that you breathe through its rooms. Even today you expect to see Austrian or German noblewomen passing by, fully dressed!


A few years ago it was awarded by Readers Travel Awards as the best Wellness Resort in the world and the catering offer is not far behind. There are three restaurants (The Pheasant, Magnolia and The Fisherman), a champagne lounge (Ruinart White Lounge), a Gin Lounge (run by mixologist Rama Redzepi) and a Beach club. Let's say that you are pampered from morning to evening and then wake up with the magnificent view of the lake in my opinion is priceless! 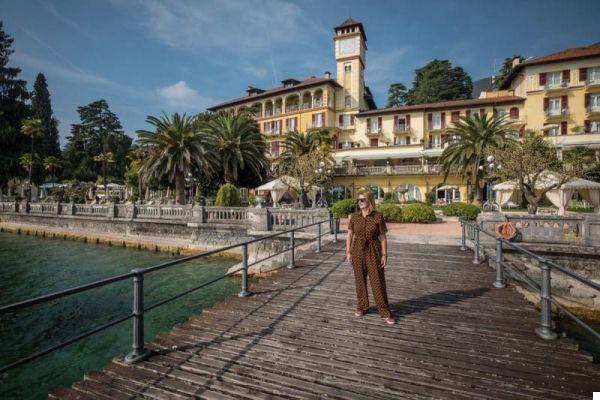 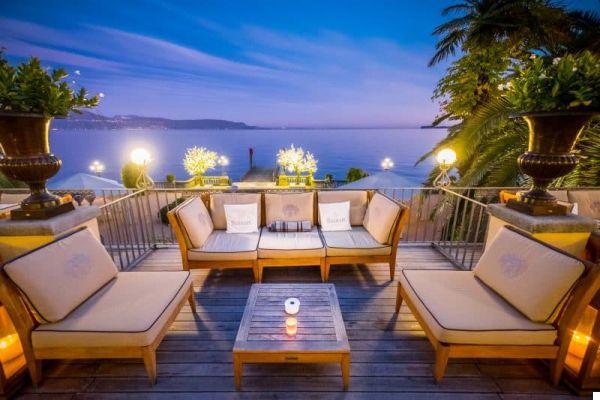 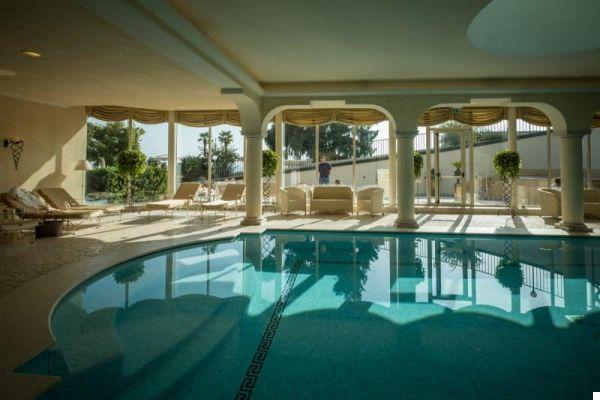 In order not to lower the level of the weekend e live an equally special experience I recommend you to eat in the exclusive "Il Fagiano" restaurant, which is always found atinside the Gran Hotel Fasano but it is also open to outsiders. The restaurant is located in the oldest room of the structure which dates back to the 800th century and has only ten tables to fully enjoy the cuisine of Matteo Felter . His cuisine fully enhances the raw materials of the territory that are reworked with creativity and often combined with ingredients of Asian cuisine. Some examples: the smoked risotto cooked in grana padano water, curry, balsamic vinegar powder, green apple, or the "Damigella" whole wheat spaghetti, lake sardine powder and Arenka caviar or smoked and glazed whitefish with teriyaki sauce his tartare, cashews with crunchy vegetables. I ordered a tasting menu (with wine pairing) and it was a mystical experience to say the least! 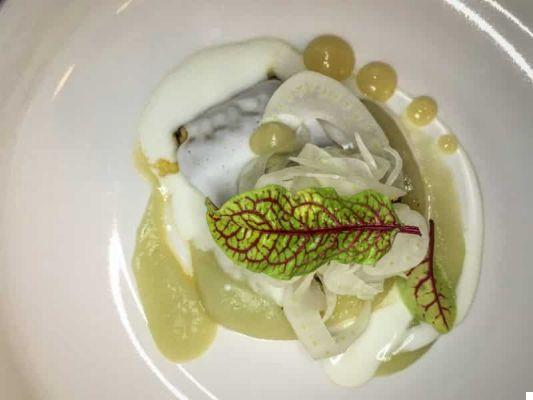 What to see on Lake Garda

You cannot understand the joy I felt: I have wanted to visit it for a million years and I finally did it !!

Il Vittoriale degli Italiani it's a complex of buildings, streets, squares, an open-air theater, gardens and waterways erected since 1921 in Gardone Riviera (very close to the Grand Hotel Fasano) by Gabriele d'Annunzio, with the help of the architect Gian Carlo Maroni. All this is in memory of the "inimitable life" of the poet-soldier and the exploits of the Italians during the First World War. The complex is very large and the visit lasts at least 2-3 hours. On the one hand there is the park (awarded in 2012 as the most beautiful park in Italy) full of sculptures that important artists have donated to the poet, then there is the Priory, that is the real house, the hangar where the MAS motorboat, la Puglia ship disassembled and brought here from La Spezia and the great mausoleum, at the highest point of the complex, where the remains of D'Annunzio and other war heroes rest. The highlight of the whole in my opinion is there D'Annunzio's house (which can only be visited by participating in a guided tour for 10-12 people - unfortunately it is not possible to take pictures inside) from which it is possible to understand a lot about this controversial poet-writer-soldier. As you study at school, D'Annunzio was a very special person and every room in his house tells something of his history and personality. The poet was a serial accumulator of objects and the house overflows with everything, books, paintings, sculptures ... and so on and so forth! In his bathroom alone, there were 800 objects (and no one could move or remove them of course!). He was certainly obsessed with the memories people would have of him after he died and built his home on this "perversion". The result is truly incredible: by participating in the guided tour you actually hear a lesson on the history of Italy from the early 900s onwards. The rest of the complex, however, is not far behind.


The Vittoriale of the Italians

If you decide to go there during the weekend or in spring-summer I suggest you book the visit online because to visit D'Annunzio's house a guided tour is mandatory (lasts 35-40 '), you enter 10 people at the time and tickets are limited. 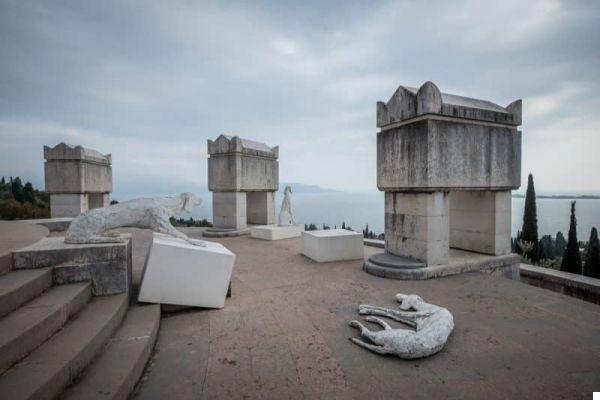 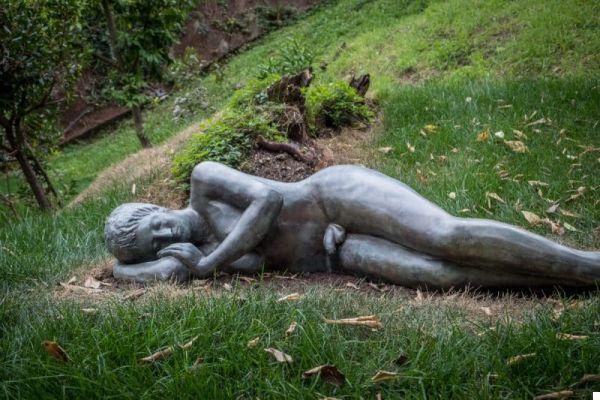 Il Sigurtà garden park in reality it does not directly overlook Lake Garda, but it is another place that I had in my travel wishlist and that I took the opportunity to visit on this occasion. It is however very close to the lake, because it is located in Valeggio sul Mincio 8 km from Peschiera del Garda. It is an immense nature park (60 hectares!) And was the winner of the second prize for the most beautiful park in Europe 2015 and for the most beautiful park in Italy 2013. The Security Park it is open all year round and, depending on the season, it is possible to see countless naturalistic and historical attractions: in the months of March and April you can admire a million tulips which represent the most important flowering in Italy and the richest in Southern Europe. Then there is the avenue of roses, which from May to September welcomes 30.000 remontant roses, a beautiful labyrinth and many ponds, where aquatic plants bloom between June and July, and immense green meadows. I visited it in autumn with the foliage of Japanese maples and I had heart-shaped eyes.

The park is very large and visiting it all on foot takes at least 2 hours; alternatively there are small ones electric shuttles (max 13 people - 5,9 euros adults / 3,9 children) with which guided tours of 1 hour are made, the train that runs along the "itinerary of enchantments" (a panoramic tour that will make you discover the most evocative places in the park - about 35 '- 3,5 euros adults / free for children under one meter in height), Golf-cart (max 4 people - 18 euros / h) with which you can visit the park independently, and, finally, the bicycles (3 euro/h). 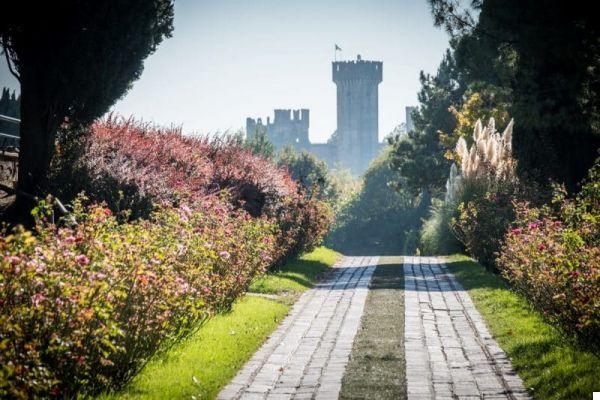 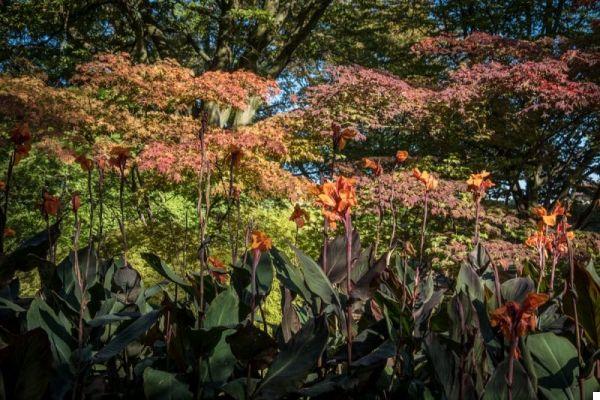 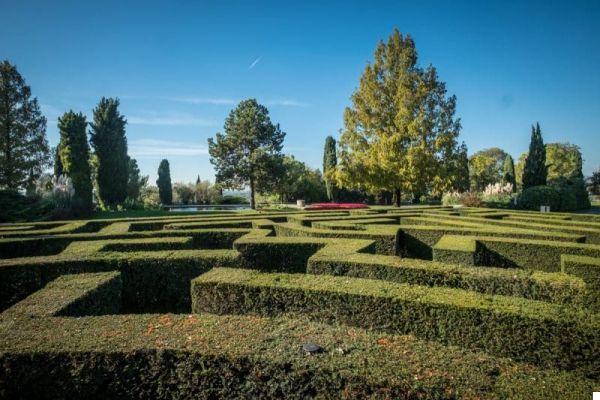 Right in front of the Grand Hotel Fasano there is an island, the largest of Lake Garda, which is called Isola del Garda. It is a magical place and looking at it from the outside it looks like a secret garden cloaked in spontaneous vegetation. In reality there is nothing left to chance here because everything is taken care of by the Borghese Cavazza family, owner of the island since 1870, who lives permanently in the villa. Since 2002 the family has opened the island to tourist visits from mid-April to mid-October and there is a boat that leaves from the lakefront and accompanies visitors to discover this gem.

La villa, in neo-Gothic-Venetian style reminiscent of the Doge's Palace in Venice, it was built between 1894 and 1901 on a project by the Genoese architect Luigi Rovelli; the palace was then enriched by terraces arranged in Italian garden, with elaborate designs of flowering hedges and bushes.

Prices: 31 euros (adults) and 18 (children)
Prices include return boat, guided tour and welcome drink.
Children up to 4 years are free and the visit lasts about two hours 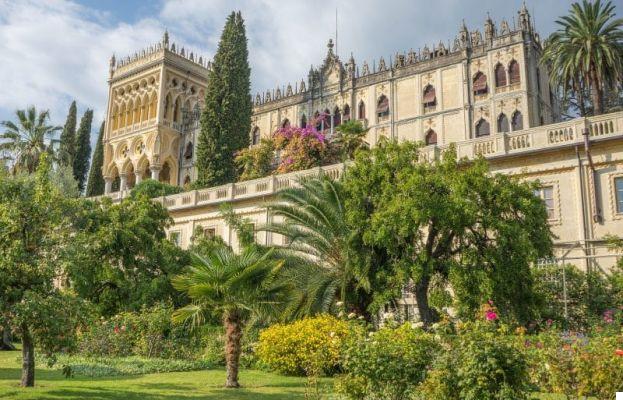 If you have more time / days available, you can climb above Salò, in the area near the church of San Bartolomeo to have a magnificent view of Lake Garda from above, or visit the little one Andrè Heller Botanical Garden (always in Salò). The latter is a garden where, among species of rare beauty, you will see works by Keith Haring, Roy Lichtenstein or Erwin Novak.

A weekend on Lake Como between villas, sport and relaxation ❯

add a comment of A weekend on Lake Garda between wellness, history and good food