My Royal Wedding with map 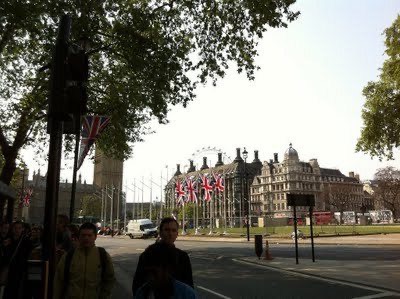 Last weekend I went to London (with my mum :) and saw the Royal Wedding. To tell the truth, the term view is not very appropriate since while all of London (and indeed all of London) was at Westminster Abbey I was my deserted London from top to bottom.

Obviously you all know how it went marriage, she didn't run away and he didn't get the lover out of the cake, so in the end they got married, but what you don't know is what I saw.

During the arrival of Kate and William in Westminster I was at Tate Modern, closed (sigh) which at the moment offers the exhibition of Miro, until September, I crossed the Millennium Bridge and I found myself inside St. Paul Cathedral. At the time of the wedding vows I was surrounded by a crowd of (crazy people) English and then for lunch in a typical English pub, the Dickens Inn, brunch for me and burgers for mom.

In the afternoon when all of London and a good chunk of England was ahead Buckingham Palace to see the kiss of the two newlyweds, I was a Kensington to enjoy the buildings and the shop open for some shopping. I haven't been so over the top that I haven't even seen one of these symbol places of the event, alone, I saw them in other moments:)

I have been to Buckingham Palace in late afternoon on Fridays when the crowd was not yet completely gone, but let's say it was much better. I passed by at Westminster Abbey next morning, I wanted to show my mum to see the church, but the line was so long, at least a couple of hours of waiting, that we gladly preferred a nice ride to National Gallery, free among other things.

Finally we did everything on foot Hyde Park, almost everything, to relax and enjoy London even better, going against the grain and avoiding the crowds.


A Piccadilly Circus on Friday night, however, we were there and there was no way, but we didn't really want to avoid it either feasts, party and lots of fun. After all, even on vacation with your mother you are fine.

Below instead, for those who prefer the classics, there is all theitinerary of the truth, English, Royal Wedding thanks to MapTalks :) But there are also the places of my trip to London, click to enter and see the photos; )

Audio Video My Royal Wedding with map
Matera, the city of the living nativity scene but not only ❯

add a comment of My Royal Wedding with map