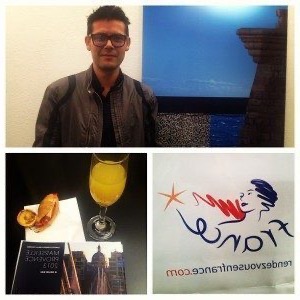 Until 15 June 2013 from 11 to 19 from Tuesday to Friday and on Saturdays from 10 to 14 with free admission, the beautiful exhibition Le Grand Bleu takes place on the occasion and for the celebration of Marseille chosen as city of culture in 2013. The exhibition takes place held at the Institut Français-Center Saint Louis.

The photographer, in the photo, is Daniele Corsini, from Bologna, born in 1975, loves to photograph cities. He dedicated reports to major European capitals, then spent several months in New York and portrayed the Big Apple in the three spectacular photographic visions of the New York Trilogy, which show the many faces of the city. His shots show a city in motion, and the various facets of what is one of the most important French metropolises after Paris. An immersion in the Grand Bleu, that Mediterranean which is the true figure of Marseille's past and future. Curator of the exhibition Donatella Luccarini who personally followed the photographer in Marseille and in the cities that are part of the Marseille 2013 project: Aix en Provence, Arles, Aubagne, Martigues, Salon de Provence and many others.

The exhibition, produced by Atout France, the French Tourist Board of Milan focuses attention on a territory that has been totally transformed, with the intervention of the greatest international architects - Rudy Ricciotti, Kengo Kuma, Stefano Boeri, Jean Nouvel, Frank Gehry, Massimiliano Fuksas, Tadashi Kawamata - who designed the new urban spaces: the MuCEM, Museum of Mediterranean Cultures, the Vieux Port, Boeri's Villa Méditerranée and hundreds of events, all year round.

Carnival in Nice, the battle of flowers in France

add a comment from Le Grand Bleu exhibition in Rome for Marseille, Capital of Culture