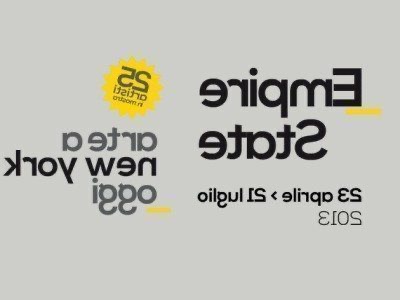 Since last 24th April until 21st July, Palace of Expositions in Rome will host the exhibition "Empire State. Art in New York today ". This particular exhibition aims to explore and analyze the myths and truths of the "big apple" through contemporary art.

The project was born from an idea of Sir Norman Rosenthal and the New Yorker Alex Gartenfeld who is also an editor and writer, who since this year is in charge of the MoCa, Museum of Contemporary Art in Miami.

Il title of the exhibition he wants to refer simultaneously to “Empire”, a treatise by A. Negri and M. Hardt on global capitalism provoked by the USA, but also to the hip-hop anthem made famous in 2009 by Jay-Z and Alicia Keys. The reference to the famous Empire State Building is also undeniable, now only once the tallest skyscraper in the world, but still a symbol of a power capable of leaving many tourists speechless.


As the architect Rem Koolhaas says “Manhattan is an accumulation of possible disasters that never happen” and it is perhaps this that places it as a focal point of birth and interaction of the greatest artists and major galleries. One of the most interesting aspects of this exhibition is its ability to have brought to light a real genealogy of artists, a network in constant movement and growth.