Stone men in South Tyrol, what they are 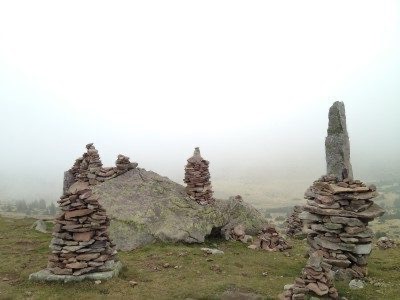 One reason to go to the mountains is always to do long walks between green and fresh air. TO sarentino, a few km from Bolzano there are several walks for those who want to relax and why not, for those who also want to learn about particular legends.

- I omitted stone they are considered one of the magical and special places in Bolzano. They are located on the top of the Mount Schöneck in Val Sarentino and the walk to get to the top is no longer than an hour and a half (I did it all :)

These stone men, that have existed for millennia, they are nothing but piles of stones. Many stones placed one on top of the other that form things similar to men from afar, but also up close. I must tell the truth that when I saw them there was also some fog and it made a big impression on me.

Already in 1540 there were written records of their existence due to a witchcraft charge against the name Barbara Pachler. The accusation was that of having participated in magical rites and witchcraft right in that place. Since then an aura of mystery reigns around these stones and I confirm.

The men are thought to have been materially made by shepherds, of the kids who when they arrived with the cattle up here to pass the time they started to build the men, which are hundreds and above all they seem indestructible. If you are near Sarentino, the invitation is to go for a trip… i children they will have a great time.

Audio Video Stone men in South Tyrol, what they are
Bali, the seven best spas ❯

add a comment of Stone men in South Tyrol, what they are