Visit the center of Padua with Legambiente and Salva L'Arte 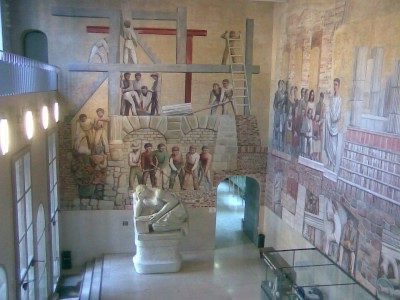 To know better Padova, I recommend that you take part in an initiative that I find very interesting. There is a group of volunteers who are part of theassociation of Legambiente which, at set times and days, accompany, explain and make accessible some monuments of Padua which, otherwise, would remain closed, thus re-evaluating their importance and prestige.

In particular, I point out the following architectural works, usable with the volunteers I was talking about:
Carrarese Palace, a complex of buildings that the Lords of Padua (the Carraresi, in fact) had built within the medieval walls.

School of Charity, a splendid and ancient lay brotherhood of Padua.

Torre dell'Orologio, one of the first astronomical clocks made in Italy and finished to restore in 2010.
San Lorenzo Bridge, a Roman bridge in the heart of the old city that crossed the Medoacus, that is, the Brenta river.

Oratory of Santa Margherita, religious center in medieval Padua.
By taking part in the visit to the Clock Tower, for example, you will be able to see the play of cables and levers that, for centuries, have marked the time and the phases of the moon, but also learn about very interesting anecdotes: from the lack of a zodiac sign and the reason for this absence, to the life spent inside the Tower, of a guardian and his twelve children.

Audio Video Visit the center of Padua with Legambiente and Salva L'Arte
Easter in Madrid: traditions to live ❯