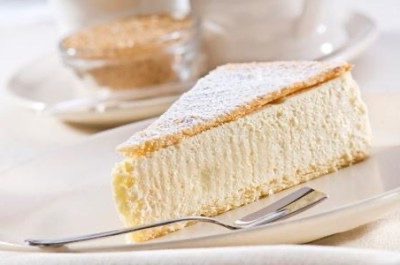 Have you ever felt in XNUMX. Paradiso? Have you ever had the feeling of "I wish it would never end"? I have tried it. It is ecstasy, it is jubilation. It is the wave of the taste buds. Because at the first bite you realize that you have never tried anything like this and you wonder how it was possible that someone was able to do this miracle. Almost a divine gift.

By cutting the slice you are faced with an unexpected scenario: what you thought and visibly was a hard cookie, presumably difficult to break, surrenders to the knife unconditionally. But it doesn't break, it doesn't shatter. He remains whole, proud, arrogant, arrogant.
Pleasantly surprised, then, you taste it and ...

The crunchy hazelnut and caramel wafer it melts in your mouth, immediately. It intoxicates you with its aromas and suddenly disappears in a cloud of ricotta cheese. And you get lost. You forget who you are, where you are.

Then, unexpectedly but not too much, a new wave of flavor assails you: bits of pear wisely flavored pamper the palate and the spirit and yes, that is Paradise!

One bite after another, the slice ends. The desire, satisfied but not satisfied, screams again and again. Read like a veil of silk, similar delights you would like to savor slowly, all the way, right down to the last shadow of ricotta left on the tray, up to the last crumb of crunchy forgotten on the plate.

And to think that a few hours earlier, walking on the main course of Vietri sul Mare, you had noticed Sandra's pastry shop by chance. It hadn't inspired you too much confidence either and you only went in because you didn't want to take home the usual ceramic ashtray. So, "why not a dessert?". Any one would be fine. Little choice, classic cream and chocolate pastries, the sacher that doesn't drive you too crazy, some other cake that maybe is strawberry or maybe not. There was one in the window ricotta and pear little one, in the internal fridge two more a little bigger. "Give me the one in the window please, just for tasting." You take it and take it home. After dinner, without too much enthusiasm, you take it out and you already know the rest :)

Kokoroya, the Japan you don't expect in Turin

Bologna, at the Mulino Bruciato kitchen open until 2 am

Where not to eat in Pisa: Santa Maria restaurant

Osteria ai Canottieri, where not to eat in Venice