New Year's Eve in the squares of Italy, here are the concerts 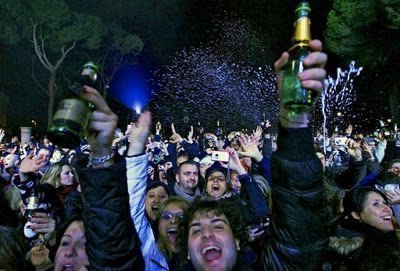 A New Year, as I mentioned in a previous post, the best way to save is to stay at home. If you haven't already booked in advance and haven't found any last minute offers, why not stay comfortably at home? No stress, no queues on the highway, no money wasted on New Year's Eve parties full of things that you will never eat, not even in a week. A nice dinner at home and then, why, off to see the New Year in the square, and then leave for a nice trip on January 2 or 3 or 6, even saving money.

A Olbia, in Sardinia, the New Year offers J Ax, a party to the sound of hip hop music just after midnight on December 31st.

A Rome instead a splendid one Laura Pausini together with syria, Paola and Chiara at the Palalottomatica. Also in Rome, at the Imperial Forums the New Year is held with Giusy Ferreri and Negroamaro for those who want a lively and fun New Year. Also in the capital, the concert of Massimo Ranieri, while at the Auditoriom Parco della Musica there is the concert of Claudio Baglioni.

A Riccione in Piazzale Roma the last day of the year ends with Bollani between classical music, jazz and soundtracks from all over the twentieth century. Among other things, the Bollani concert will also be broadcast on Rai3 with the Riccione Bollani Show.

A Firenze instead on December 31 in Piazza della Stazione Santa Maria Novella the concert of Caparezza, the Apulian rapper who will offer a beautiful show to all Florentines and not.

A Treviso the Turin band, i Subsonica they launch into the most famous midnight concert of the year at the Zoppas Arena, while at the Palaverde in Treviso there is the concert with Rumatera, Marky Ramone and Mellow Mood, for those who prefer to relive the good times of Ramones here is bread for his teeth.


A Milan theVerdi Orchestra proposes 4 events for the New Year, from Thursday 29 to Sunday 1 January it will be the Ninth Symphony of Ludwig van Beethoven to open the new year. Stalls price 50 euros, gallery price 40 euros. The concert of Giuliano Palma, Capossela e Paolo Rossi, will make the whole city dance for a crackling New Year.

A Bologna in Piazza Maggiore in place of Patti Smith and Ben Harper will be the Gospel to close the old year and greet the new year. For those who want to experience a New Year out of the ordinary, here is an interesting proposal that combines Western and African traditions.

Audio Video New Year's Eve in the squares of Italy, here are the concerts
Alberobello light Festival, the City of Light ❯

add a comment of New Year's Eve in the squares of Italy, here are the concerts