Rent a RV in the United States it may be different from Spain or most European countries. Before booking you need to know and be well informed about driving in the USA, the required documents, the costs, when to travel and where to rent. Getting informed in advance can be very useful to avoid unpleasant surprises.

Drive in the United States

Driving in the United States is like in Spain, you drive on the right side of the road. But not everything is like in our country. There are some differences, such as road limits which in most cases are lower. Furthermore, you must pay close attention to road signs and limits expressed in miles per hour and not in kilometers per hour.

To drive any vehicle in the States the Spanish driving license okay, but in several American states it must be accompanied by the international driving license. Before traveling, inquire about the states you will pass through, and if in any state it is required, it must be requested. It can be requested from both the Civil Motorization and the ACI offices. The cost at the ACI offices can be a bit higher, but the procedure for receiving it will be much faster.

Pay attention to the size of American campers. Like all things in American culture, everything has to be done big or it has to overdo it. Even the campers have larger dimensions than those used in Europe. Before booking, consider that smaller dimensions can make it easier, if you have to travel city streets, to find parking or on mountain roads.


Why choose a motorhome trip

The reasons for choosing an RV to visit and travel around the United States are manifold. The culture of caravanning in America it existed much earlier than Spain and is deeply rooted. On the long American roads hundreds of campers meet ready to reach the various destinations and destinations. In addition, the wide roads kept in perfect condition allow pleasant driving.

On most trips, the driving part is seen as more of an inconvenience than an advantage, but in the United States the opposite is true. The American streets are real tourist attractions, and the best example of this is on Route 66.

This road is a major tourist destination in the United States, especially for those who want to take a road trip. By motorbike, car or camper, the important thing is to drive and enjoy the beautiful American landscapes.

The rental cost of the camper is about $ 50 a day. Then, if you want, you can add various insurances or packages with unlimited mileage. An advantage of RV rental in the USA is the much lower cost of gasoline in Spain, less than half. In addition, the favorable exchange rate (currently at 1.20) further reduces costs.

Parking costs must be added to the rental and fuel costs. Many times it can happen to park in campsites or paid parking areas. Approximately the cost of a trip with a camper is the same as that of a trip with car rental and hotel accommodation. The choice of the camper is for those who want to experience the road more, prefer contact with nature and being outdoors.

Before renting a motorhome, you must first book your flight. The rental of the camper is done later, according to the airport of arrival. Almost always you land (and start your journey) at the airports of large American cities such as: New York, Los Angeles, Chicago, Miami, Las Vegas and San Francisco. All of these airports offer various RV rental companies with large fleets of vehicles.

If you want to go there Route 66 it is preferable to choose the airports of Los Angeles or San Francisco, or that of Chicago.

If you want to do a Tour dell’Ovest: Los Angeles, San Francisco or Las Vegas are preferable.

While for itineraries that touch the states of East Coast: New York o Miami.

The United States is such a large country that at any time of the year it offers one or more destinations with a pleasant climate. In the winter it is better to choose the southern states, while in the summer the northern states. In the intermediate seasons, spring and autumn, the choice can be made on any state. 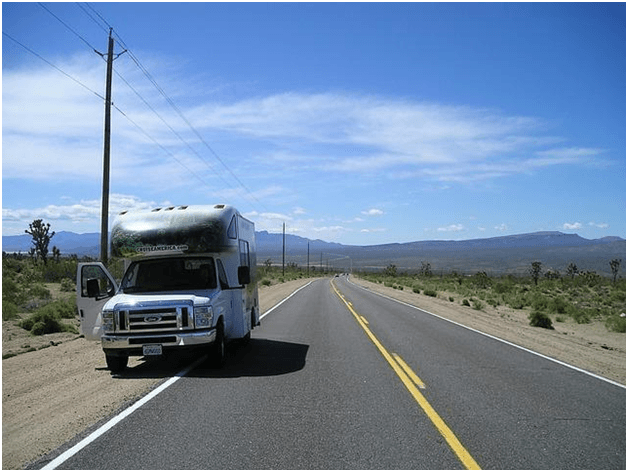