Montepulciano, a pearl in the heart of Tuscany 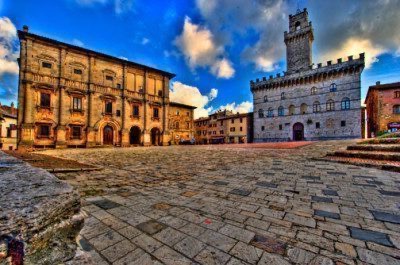 If you intend to visit one of the most characteristic areas I recommend without any doubt the province of Siena and in particular Montepulciano, because it is situated between the Valdichiana and the Val d'Orcia and offers a composite landscape, in which urban centers rich in masterpieces and sinuous hills harmonize where you can lose your gaze.

Here the woods are wonderful, it is a real thrill to walk among the chestnut trees, i Scots pines and holm oaks, especially if during the rest of the year you don't have the opportunity to admire the green of nature. Montepulciano is a small village whose walls date back to the fourteenth century but its origins are Etruscan, it was the king Porsenna, according to legend, to found it.

Today Montepulciano is known all over the world for its wine and an interesting curiosity concerns the discovery in an Etruscan tomb of a cup for wine (called kylix), which testifies to the importance of local vines already in ancient times.
As soon as I arrive I visit the Church of St. Blaise, also called the Temple for its imposing appearance, it is immediately noticeable thanks to the white of the travertine and its Renaissance style.
I move to the highest point of the city, in Piazza Grande, to admire the Town Hall: I recommend going up the tower to enjoy an exceptional view.

In the same square there is the Cathedral, which houses several works of art including the Triptych of the Assumption by Taddeo di Bartolo placed on the high altar. The funeral monument of Bartolomeo Aragazzi in Carrara marble, made by Michelozzo in 1436, divided into 9 fragments of which 7 are kept in the church.

However this village is to be visited especially for the spa, so those who have a relaxing weekend in mind even in autumn can book a stay in Montepulciano and rediscover well-being thanks to sulphurous waters that keep their natural qualities intact.

But a holiday here cannot be complete if you don't try the Vino Nobile, the DOCG red perfect to be paired with red meats or aged cheeses.

Tuscany offers precisely these specialties in the numerous restaurants and typical trattorias: the salami of Cinta Senese, pecorino di Pienza, Chianina meat are products that are easy to find here in all seasons.

A feature that struck me very much is that Montepulciano is a city attentive tocontemporary art, in fact it takes place here every year in July International Art Site, a review of prestigious events with guests from all over Italy, with the involvement of many inhabitants and some free appointments (in addition, admission is always free for children under 16).
An original way to range from concerts to theatrical performances to street art performances, proof that Montepulciano is one of the liveliest centers in Tuscany, the desire to go back is guaranteed, I assure you!

The beauty of the landscape, which is among the most evocative in Tuscany, also makes Montepulciano a destination chosen by many foreigners to celebrate weddings and events, notoriety that has grown further abroad, after the location was also chosen as a film set for one of the episodes of the successful trilogy of Twilight.

Audio Video Montepulciano, a pearl in the heart of Tuscany
Win the Dolomites for 5 people and start the holiday ❯

add a comment of Montepulciano, a pearl in the heart of Tuscany