Sea in winter: what to do in Orbetello 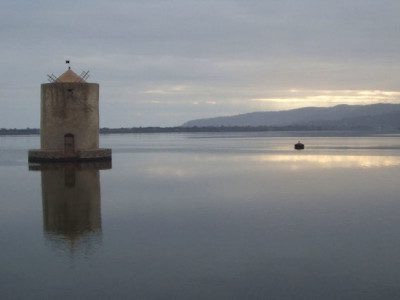 If you are attracted by the atmospheres of winter sea, just like me, here's the idea. Crowded and lively in the summer, Orbetello it is also appreciated during the winter. The town on the lagoon stands on one of the three tomboli, the strips of land that separate the Monte Argentario from the Maremma coast and delimit the sea; but unlike other seaside resorts, Orbetello is a city and therefore also in this season you will not find a desert there.

Take advantage of the beautiful winter light days to take a walk along the lagoon or venture into the city center, which has important evidence of the past, especially the period in which this city was the capital of the Presidi state, Spanish domination that presided over the entire Maremma coast and the Argentario.

But then you have to eat fish, which they really know how to do here, for example from The fishermen. Before the doors from which you enter the town, on the right coming from Aurelia, is the sales point, as well as a restaurant, for all the catch of the lagoon. The restaurant is managed by the fishermen's cooperative of Orbetello and is open only for dinner in winter and in summer. With a first, second and wine you spend around € 20.

Orbetello is located halfway between Livorno and Rome; a railway station connects it to Grosseto or Civitavecchia.

Audio Video Sea in winter: what to do in Orbetello
What to see in Pula, one of the most interesting places in Istria ❯

add a comment of Sea in winter: what to do in Orbetello