A day in Basilicata: between Pietrapertosa and Castelmezzano


What to see in Basilicata in one day, the villages of Pietrapertosa and Castelmezzano on the Lucanian Dolomites, from where to make the flight of the angel, all in the post.

On the so-called Lucanian Dolomites, in that of Basilicata, two small villages arise, perched on the slopes of the mountains, which boast their presence in the list of the most beautiful villages in Italy. I'm talking about Castelmezzano and Pietrapertosa.

I visited these two gems in the summer, on the occasion of the Angel Flight which is the tourist attraction that attracts many people to these places and around which the tourism of these two countries revolves. Apart from the Flight of the Angel, once you arrive here, it is worth visiting the two villages which, although tiny, still have some truly characteristic corners.

After about two hours by car coming from the south, you reach Basilicata, and it is easy to find the exit Castelmezzano or continue and exit a Pietrapertosa. The two villages are nestled in the Lucanian Dolomites, precisely facing each other, perched on the top of the mountains. 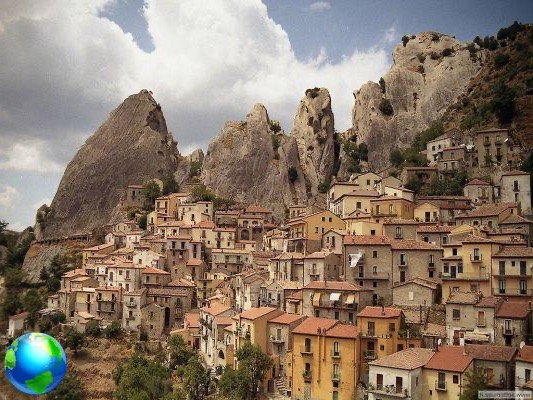 The space that separates them is immediately visible. Once you leave the Basentana ring road, you immediately enter a mountain road, all uphill that leads to the top of the villages. Looking up, it is possible to admire the Lucanian Dolomites and the long steel cable that separates the two countries is easily recognizable and to see the people who are making their flight.

Once I arrive in Pietrapertosa, the village I have chosen as the departure of my flight, I decide to take one visit to the village. Pietrapertosa still retains its medieval aspect, the houses are built according to the rock which is the constant of these places. Narrow alleys and streets characterize it and seem to follow the natural conformation of the landscape. It is no coincidence that its name Pietrapertosa derives from "Pietraperciata“, Ie pierced stone, due to the presence of a pierced cliff. 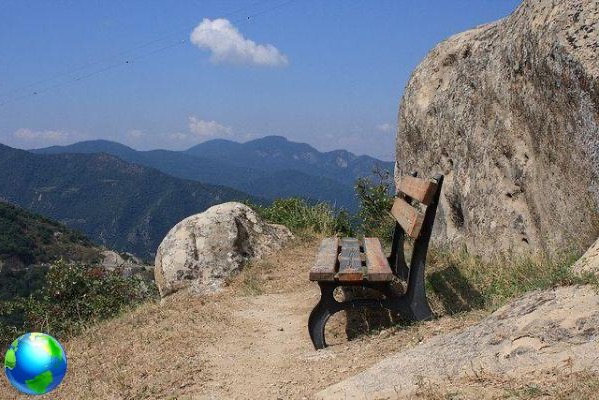 Once in Pietrapertosa, the Castle dating back to the XNUMXth century is worth a visit. to. C. which is accessed via a path at the end of the country. From here it is possible to admire the whole valley of the Dolomites and enjoy one Breath-taking view. During the walk through the village, it is possible to notice the presence of numerous noble palaces, whose portals are carved with the local stone and are very suggestive.

Unfortunately, the visit is short because I have to reach the departure station that will fly me to Castelmezzano, but know that here it is also possible to visit the Mother Church of S. Giacomo Maggiore and the Convent of S. Francesco d'Assisi, both from the fifteenth century that contain important evidence of Lucan art between the fifteenth and eighteenth centuries. 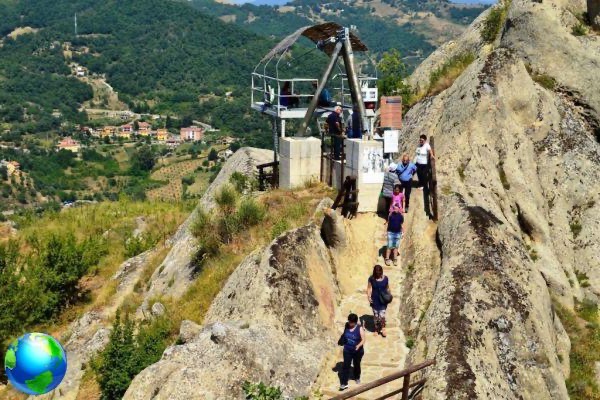 Reached Castelmezzano after the outward flight, I come across the famous one impervious path which allows me to reach the top of the mountain. But before making my second flight back to Pietrapertosa, I pay a visit to the town. Castelmezzano looks like a village also dug into the rock, whose background is represented by the Lucanian Dolomites that have assumed shapes that resemble some animals: in fact, the erosive action of atmospheric agents has given these mountains the shape of an owl's beak, of snapdragon, anvil and golden eagle.

The structure of Castelmezzano is also medieval and looks like a small perched nativity scene. Walking through its inhabited center you can see how the houses are inserted into the rock and precisely because of this characteristic, of reconciling urbanization and the natural landscape without distorting it, Castelmezzano is called city-nature.

Here you can visit the mother church of Santa Maria dell'Olmo with its majestic Romanesque façade, covered with local stone and marked by four columns and an architrave decorated with flowers, lions and two-headed eagles. 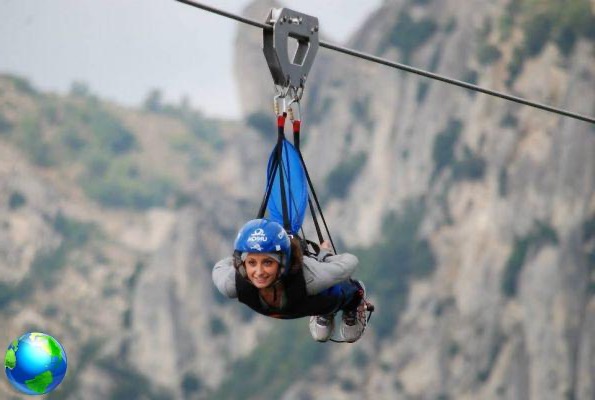 Here too, walking through the town, you will come across numerous noble palaces such as Palazzo Ducale and Palazzo Coiro which feature local stone facades and characteristic arcades and railings. Continuing the walk through the town you will reach the ruins of the Norman castle, which preserves the surrounding wall and a cistern for the collection of meteoritic waters.

Castelmezzano as well as Pietrapertosa present themselves as two examples in which urbanization blends with the natural landscape, not modifying it, but rather adapting to it.

Numerous le shops and refreshment points rooms that frame the main element which is the Lucanian stone, bare and raw, but which here is softened by a profusion of vases and flower beds that give a touch of color here and there to these two villages located in the Lucanian Dolomites.

Audio Video A day in Basilicata: between Pietrapertosa and Castelmezzano
L'Antica Delizia, ice cream in Castellina in Chianti ❯

add a comment from A day in Basilicata: between Pietrapertosa and Castelmezzano