Rimini: the two thousandth anniversary of the Tiberius bridge 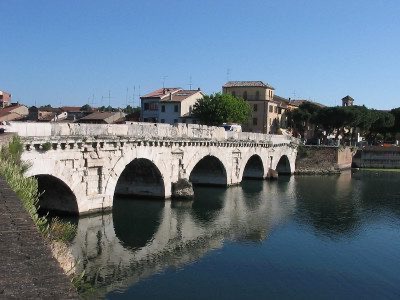 Rimini it is very often, and unfortunately, synonymous with sea and fun, but in reality it is also a city with a noteworthy historical and cultural past. In fact, the Tiberius Bridge, one of the main symbols of the city, this year celebrates the beauty of 2000 years.

Wanted and begun by the Emperor Augustus in the 14th century AD and completed by the Emperor Tiberius in the 21st century AD, the Tiberius bridge, built in Istrian stone, is today one of the best preserved Roman monuments in the world.
It was once the bridge that connected Ariminum (Rimini, in Latin), through the consular Emilia and Popilia, to the cities of the North including Piacenza and Ravenna, and still today, it has remained one of the main crossing points in Rimini, which connects the historical center of the city in the village of San Giuliano, a fascinating and ancient village linked to the marine life of Rimini and the childhood memories, and not only, of Federico Fellini.

It was built with cutting-edge techniques so as to withstand numerous wars. Although in two thousand years it has risked giving way due to human vicissitudes, today it is there, as a testimony of its glorious past.
In fact, in the Middle Ages, an arch was destroyed, but it managed to resist, even during the Second World War, when it was the victim of German bombings, which tried to undermine it to blow it up during the retreat.

The Tiberius bridge between past and legends

Neither bombing nor wars have managed to knock it down, so much so that, on the Tiberius bridge, a legend and a reputation were created and narrated: the “Devil's Bridge”.

In fact, legend has it that the Emperor Tiberius took seven years to complete the construction of the bridge, commissioned by his father Augusto; seven years characterized by numerous hitches, so much so that the works had to be interrupted at various times, in which it was even necessary to destroy some parts of the bridge, already completed, due to technical problems.

Afflicted by the impossibility of completing the construction, the Emperor Tiberius turned to the Devil with whom he entered into a pact. The agreement provided that, once the work on the bridge was completed, the Emperor Tiberius himself would have to make the first crossing of the bridge and right there, he would have to give his soul to the Devil. Once the work on the work was finished, however, Tiberius refused to give up his soul and had a dog carry out the first crossing of the bridge. Lucifer, aware of the deception, tried to destroy the bridge but was unable to do so, the bridge was indestructible.

From the past to today

The Tiberius bridge, together with the Arch of Augustus, is the symbol of Rimini, so much so that since the Middle Ages, until today, it is represented in the coat of arms of the city.
To celebrate his two thousandth anniversary (14-2014), the Minister of Development Corrado Passera has decided to dedicate a celebratory stamp to him and in this spring 2014, some renovations will begin and develop over a period of seven years (including the desire to make it pedestrian), cultural events and events.


The Tiberius bridge, once exalted the civic and religious values ​​of the Empire, today instead represents an important piece of history for the city of Rimini and for the Italian artistic and cultural heritage.
In addition to being a historical relic appreciated by tourists, the Tiberius bridge is an important monument loved by all the Rimini people.

Audio Video Rimini: the two thousandth anniversary of the Tiberius bridge
Cheapside's lost jewels on display at the Museum of London ❯

add a comment of Rimini: the two thousandth anniversary of the Tiberius bridge