La via degli Dei, 5 days itinerary: trekking for everyone

A 4, 5 or 6 day trek from Bologna to Florence, here is the itinerary and the stops, the advice on where to sleep between Emilia and Tuscany.

La Street of the Gods it is now a path trekking very well known and popular. I also did it in the days around April 25 and I want to tell you about it because you too can do it. 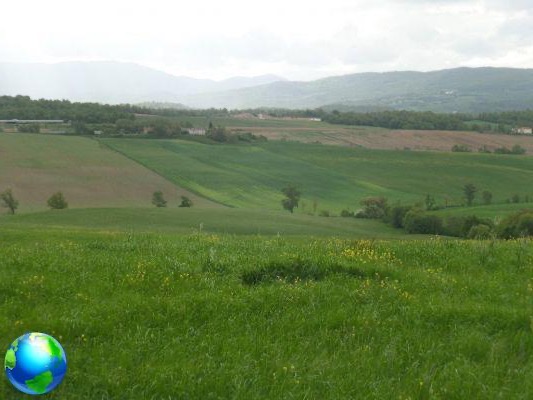 The way of the Gods: how it works

The Tour joins Bologna with Florence, crossing the Apennines. The choice of the period in which to face it is fundamental: the spring it is definitely recommended, too the autumn it must be beautiful in light and color. I don't think midsummer is recommended, because many stretches are in the countryside and not high, certainly very hot. In any case, the Via degli Dei is a slow, pleasant, even low-cost way of discovering territories that are close to home in my case, but still unsuspected.
The entire stretch of about 120 kilometers is covered in 4/5/6 days, it depends on the training, on the "voracity" with which to complete the stages or rather on the desire to enjoy the landscape and the way. 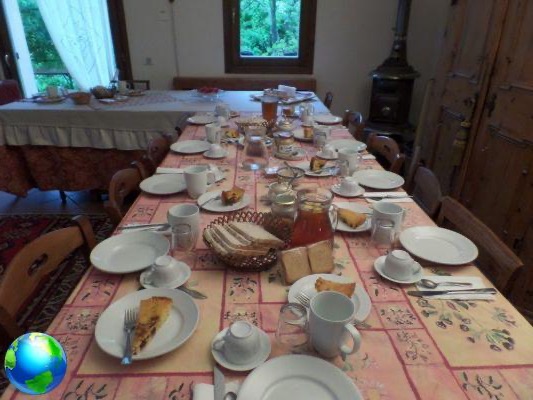 The most popular direction of the journey is Bologna-Florence but of course you can also do the opposite. As far as I'm concerned, the days used were 5, with stops on 20/25 kilometers a day. Equipped with backpack with change of clothes, water, food, second pair of boots and all overnight stays in facilities on the route. The accommodation facilities are all along the route, but the lower cost version provides the overnight stay in a tent.

Before going into the details I will list the things I liked the most: the slow pace (the same stretch by train: 35 minutes!) unsuspected landscapes, the solitary woods, the green valleys (now in spring) and full of flowering trees, the warm hospitality of the people and the affability towards the walkers.
What disappointed me a bit is the presence of numerous stretches of asphalt: and if it is true that you never walk on busy roads, it is always asphalt, which tires the traveler a lot.

What I will tell you is the way in which we have structured the path, according to our stages, which can however be changed. Departure from Bologna, Piazza Maggiore, where walkers are immediately spotted walking around in boots and rucksacks between Bolognese and tourists. 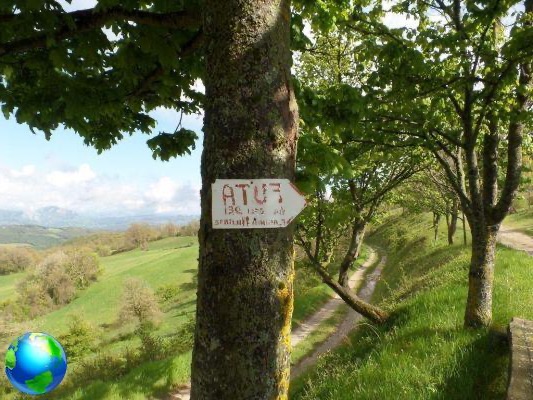 First you leave the city heading towards the Sanctuary of the Beata Vergine di San Luca, following the beautiful covered path that leads to pilgrimage (today more than anything else it is used for sports / walks for the inhabitants of Bologna). Once up there, go down the via dei Bregoli, an ancient path that connected the sanctuary with the Reno valley and leads to a very beautiful city park, Parco Talon. From here you begin to skirt the Rhine river, with unexpected landscapes, given that we are a stone's throw from Bologna center.

The path leads to Sasso Marconi, but there are naturalistic oases and documentation centers. You then pass close to Sasso Marconi, without entering it, and head towards the Prati di Mugnano. The area is beautiful, we are on the Bolognese hills, sweet, green, so different from the Tuscan hills. We then approach Badolo. Here I spent the first night in a B&B surrounded by a beautiful garden, full of trees and plants: it's called Nova Arbora and offers impeccable hospitality, in a tastefully restored farmhouse. Mrs. Donatella took us with her car to the restaurant in the evening, which is located in Badolo: after a day of walking even two kilometers to go to the restaurant are too many! Nova Arbora was a nice place to stop.

The second day, which unfortunately was entirely in the rain, is the one I remember with the most stretches of asphalt. You cross the Pliocene Contrafforte Natural Reserve, a geologically interesting area, which includes the ascent to the Mount Adone (here is the first god, whose name). It is a very panoramic place, with very suggestive chasms and gorges, to be enjoyed however with other meteorological conditions.

Going down to Brento there is also a nice restaurant, the old trattoria Monte Adone. The next stage leads, on asphalt, to Monzuno: here it is a must to stop at the Post Bar, where hikers are welcome. Free internet for everyone, a huge collection of coffee cups along the walls and

The third day saw us cross the border and return to Tuscany. But first we made a beautiful stretch of road to reach the Madonna of the stoves, a town near Monghidoro. All the way up to Madonna dei Fornelli is a wonderful countryside, sparsely inhabited and relaxing: on our right the highest and still snow-capped peaks of the Apennines. After Madonna you go up and you begin to see the paths of the ancient Roman road Military Flaminia. 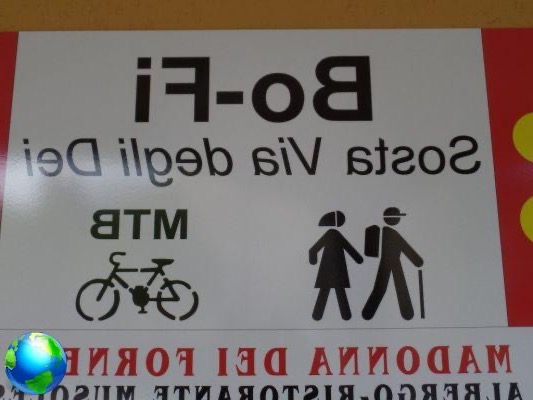 This is one of the beauties of the route, because walking on an ancient route of centuries and centuries (187 BC) is exciting. The Roman pavement takes us for a while through a chestnut wood. But even here the countryside is to applause, with pastures and dream valleys. Meanwhile we are getting closer and closer to conifers, with a wood that slowly leads up to Pass of the Futa, we are now in Tuscany. The view already stretches towards the valley of Mugello with Lake Bilancino in the background. At the Futa pass is the German War Cemetery, open to all free of charge. A monumental reminder of all the German fallen of the Second World War, right here where the Gothic Line passed. Visit it, the purpose of its constitution after the war was above all as a warning against other wars and other deaths.

Al Pass of the Futa there is a large campsite, another is located just below, in Monte di Fo: I stayed there, Camping Il Sergente, which offers both bungalows and apartments. You can also have dinner at the campsite restaurant.

On the fourth day you have to pass by Monte Gazzarro which also presents the most difficult and roped sections of the whole route, even if in the middle of a beautiful forest. You always walk at high altitude along the ridge, one of the places you cross is the Pass of the Osteria Bruciata, accompanied by a macabre legend. From that point the indications lead to Sant'Agata, a beautiful Mugello town with a wonderful Romanesque church; but you can also go further and go directly to San Piero a Sieve, passing by Gabbiano, in the middle of a splendid countryside, this time 100% Tuscan. 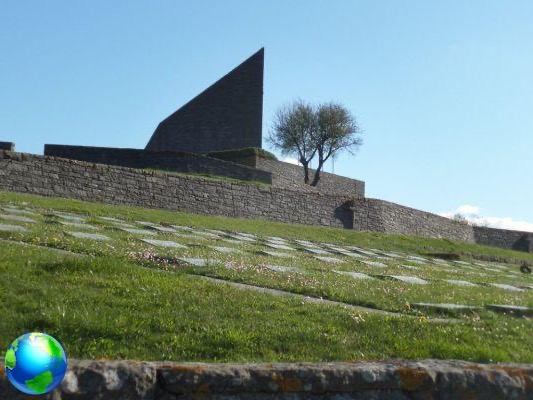 In San Piero I recommend staying overnight in B&B Around Florence which is located in the most central square of the town. The apartment allows self catering, or you can eat in the village. Rita is an exceptionally caring host.

The fifth day leads to Fiesole, with a long and demanding stage that crosses historically and artistically important places: in Mugello the Trebbio Castle, home of the first members of the Medici family and then the Badia del Buonsollazzo, and then towards Florence the ascent to the mountain that houses the Convent of Monte Senario. From there towards Vetta alle Croci, and then cross the beautiful Olmo meadows. From Poggio Pratone you slowly approach Fiesole, the town of Etruscan origin which was founded well before Florence through Monte Fanna.

When you arrive in Fiesole there are many dining options, in Piazza Mino there are bars and restaurants. From here you can reach the center of Florence by bus no. 7 which has its terminus in Piazza Mino, or do a long way on foot, but downhill, towards Florence.
All the stages, the differences in height, the hospitality on the Way are described on the site www.viadeglidei.it

Audio Video La via degli Dei, 5 days itinerary: trekking for everyone
5 dishes of Roman cuisine, tradition at the table ❯

add a comment of La via degli Dei, 5 days itinerary: trekking for everyone