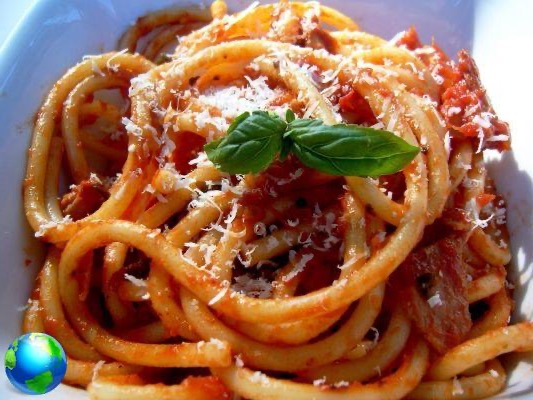 Rome it is one of the most beautiful and popular tourist destinations in Italy, but many visitors miss the opportunity to enjoy the authentic Roman cuisine. The unique specialties of Roman cuisine are among the most popular Italian regional cuisines and reflect the ancient city's rich history and cultural influences. The dishes are made with simple ingredients, of rural origins and sometimes enriched by the importation of other peoples who lived there.
here are the more traditional dishes of the capital: bucatini all'amatriciana, lamb in the oven, artichokes alla giudia, saltimbocca alla romana and finally, Maritozzi with cream.

Impossible not to stay in the capital without having tasted one of the tastiest but also easy to prepare dishes: bucatini all'Amatriciana. Originally from the city of Amatrice, in the province of Rieti, this dish is included in the list of traditional Lazio agri-food products and has always been on the menus of trattorias and restaurants in Rome.
The ingredients are simple and genuine: bacon, cherry tomatoes, chilli pepper, white wine and a sprinkling of pecorino romano. The use of tomato distinguishes it from gricia, another sauce made with bacon and pepper.
Do you want to add some variations to the traditional Roman recipe?
Half an onion is enough to sauté the bacon which is sometimes replaced by pancetta.

It belongs to the culinary tradition of Lazio and it is the typical dish of the Easter period but if you order the lamb also in November you can be sure that it is impossible not to find it among the courses on the tables of the restaurants in Rome.
The lamb is a young lamb, for this reason its flesh is delicate and tender. Even if the traditional one just wants rosemary, garlic and a glass of wine, the lamb can be proposed in three versions: lamb hunter, Roman style lamb, browned whole in garlic, oil, chopped ham and accompanied by potatoes roast. Finally the famous lamb chops a scottadito, chops greased with lard, salted and peppered and cooked on the grill.
If you want to taste the classic dish, a good lamb can be found in trattorias and restaurants from Trastevere to Testaccio.

Artichokes in the giudia

A good second, is often accompanied by artichokes alla Giudia, one of the most famous recipes of Roman cuisine. This dish was born in the city of Rome but more precisely in the Jewish ghetto: the artichoke was eaten in period of the recurrence of Kippur, the feast of atonement, after a long fast and therefore called "to the judiciary". Simple but tasty: they are first seasoned and then fried in crispy olive oil.
The most recommended area is certainly that of Ghetto, dotted with kosher restaurants where the artichoke is the real specialty of the house.

A Brescia origin has been attributed but the Saltimbocca are a real workhorse of Roman cuisine. Few ingredients with great flavor: thin veal marinated in white wine, enriched with sage and raw ham; finally it is cooked in a pan with a knob of butter.

The cappuccino and maritozzo breakfast with cream is one of the most delicious and soft rites that Rome offers.
For the bars of Trastevere (but also in other areas of Rome) it is impossible not to notice this sweet and soft sandwich, whose dough is enriched with pine nuts and raisins; usually cut in half and stuffed with fresh whipped cream.
The Maritozzo seems linked to a romantic tradition: the fiancé gave it to the betrothed at the time of Lent as a sign of their love and this sweetness she had a sugar decoction with two pierced hearts. Strolling through Rome, especially between Garbatella, Testaccio and Trastevere, it is easy to find a bar that from the early hours of the morning serves fluffy husbands, cut on the spot and filled with cream or cream.

SantarcanGelato in June in Romagna

add a comment of 5 dishes of Roman cuisine, tradition at the table