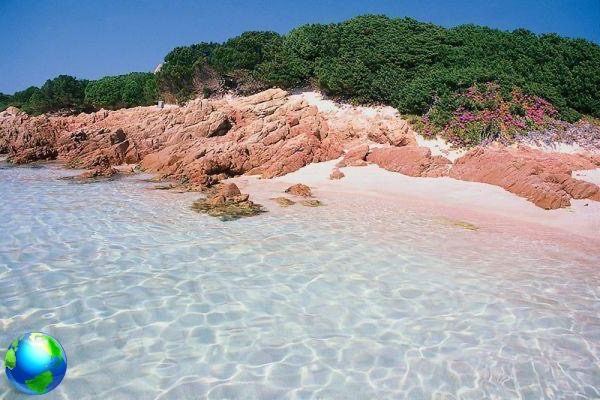 An open-air museum shaped by the slow and inexorable force of the waves and the impetuous wind of the Gallura. Coves set among the multiform rocks immersed in the Mediterranean scrub grown looking at one of the cleanest seas in the world. L'Archipelago of La Maddalena this is a treasure of the Mediterranean which among its islands contains part of those characteristics for which the island is famous nature of Sardinia.

An uncontaminated, harsh, wild nature that rewards those who venture to discover it with respect. The best way to appreciate these islands is certainly by boat, which allows you to get to places that, through normal boat trips, you cannot reach. With a private boat you will have some autonomy to go in search of a quieter and more secluded place to drop anchor. You can decide to look for the remnants of the war wars among forts, now dilapidated houses, and semi destroyed moles by the force of the waters. Be careful though, with a boat you will be tempted to fish or take sea species like urchins, but beware of fishing rules: almost completely prohibited or with few exceptions. The fines for violating these rules are very harsh! The most affordable and pocket-friendly alternative are boat trips that depart mainly from port of Palau (but now also from other ports daily itineraries to visit the Archipelago).

La boat trip will allow you to easily reach the islands you choose to visit (the various companies organize different itineraries, different in duration and route). With the stops they make, they don't appreciate the clarity of the water with a dive from the same boat it is impossible. On some stretches of coast they allow the descent to land to explore the unspoiled nature. Being organized boats with different attendants inside, they give a complete service to the tourist and often a ticket is included in the ticket full lunch or a buffet with typical Sardinian products. Choosing to visit the two islands from the ground can be a good choice.

The island of La Maddalena is connected with a bridge to Caprera; an advice: to get to the suggestive "Cala Coticcio”(Caprera) there is a path that cannot be covered by car and with the heat of summer it can be very tiring to get there. Fatigue that is rewarded by the place once you arrive. A so-called "Tahiti" for its extreme beauty. A small beach between majestic rocks that overlook a pool of shining blue water that is heated a lot by the sun due to its geographic conformation. Since there are many islands that form the protected park (such as: Razzoli; Budelli; Santa Maria; Santo Stefano), hundreds of species are allocated inside them, protected by strict rules and for this reason entry is not allowed in certain areas of the perimeter.

For example, it is not possible to get to the famous Pink beach of Budelli, pink because whole coral fragments and the same corals could be found in the form of colored sand on the beach. The incivility of the people who, raid after raid, have compromised that unique specificity by taking away the same sand from the beach, usually very lightly through small bottles filled on the shoreline. The park administration has therefore banned the area so that the balance of the beach is recomposed. Only on the island of La Maddalena are there tourist settlements such as villages and hotels, and, right here is the homonymous city of the island that offers services of all kinds. The city is a classic Mediterranean village with alleys that open onto squares and often lead to the seafront. Promenade dotted with clubs that offer verandas overlooking the sea, a few meters from the moored boats. At the center of the long avenue that runs along the sea, the port connects the city with Palau with frequent day and night trips with ferries that give the possibility to embark the car.

Audio Video La Maddalena archipelago, pink beaches in Sardinia
What to see in one day in Vigo ❯