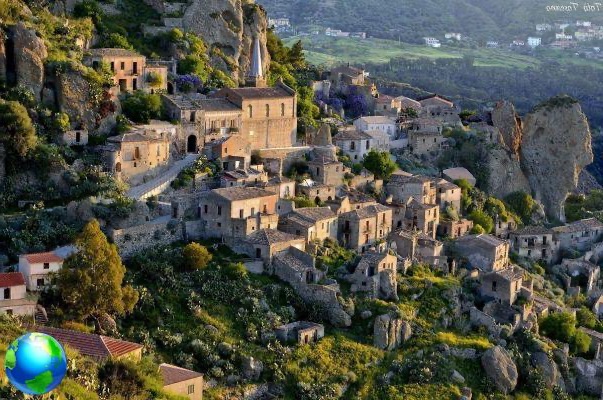 There are places, in our beautiful peninsula, surrounded by an aura of mystery, often peppered with legends, old or new, which however offer the visitor wonderful surprises. One of these, certainly the Aspromonte National Park, in the deepest south of the boot, one of the most intact, least explored and least known corners of the Calabria. Obviously I am biased, being Calabrian, but in recent years, I have had the pleasure of rediscovering my region and discovering corners that I did not know at all before and that I believe have nothing to envy to those more known and promoted in other areas of Italy .

In my opinion, one of the most interesting ways to discover the Aspromonte is to follow the itinerary of his parents ghost-villages, some of which torn from decay and unauthorized building and have become today extremely suggestive places. There are several and they also allow you to enjoy the view of spectacular natural scenery. If you are a lover of walking, nature and adventure, here is a mini guide in search of abandoned villages.

Obviously, the villages can also be reached by car, for those who are less sporty!

Let's start with Roghudi, abandoned following a flood, which can be reached starting from Bova, in about six hours of walking. The path runs along a stream called “Amendolea” which, with its tortuous path, makes its way through the mountains to reach the sea.

Africo Vecchio, whose history is strongly linked to the 'Ndrangheta, was abandoned due to one landslide in the 50s and today looks like a suggestive tangle of huts immersed in majestic naturalistic scenarios.

The most spectacular and well-known village, however, is Pentedattilo è clinging to a spectacular rock shaped like a hand and is the perfect example of the rebirth of these abandoned places. The inhabitants of Pentedattilo in fact, have fought over the years so that the village was not destroyed and currently from some of the abandoned houses, craftsmen's workshops have been created, or delightful B & Bs where it is possible to stay overnight and which recall to atmospheres of other times. There are also several events that have been created to attract visitors such as the Pentedattilo Film Festival (August) and work camps called the “Campi del Sole” which are built on land confiscated from the mafia and which are promoted by the Pro Pentedattilo association, the organization committed to promoting the culture of legality and the fight against the mafia.

Audio Video Ghost villages in Calabria: a mini guide
Azores, what to do in 2 days in San Miguel ❯

add a comment of Ghost villages in Calabria: a mini guide