Sleeping in San Pietro for the election of the new Pope 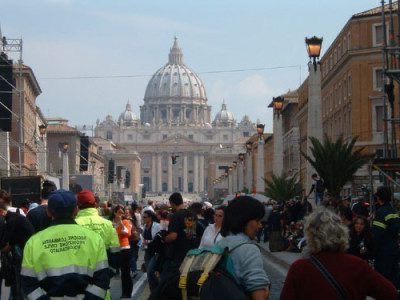 In the coming days Rome it will literally be stormed by the faithful from all over the world, but also by the simple curious attracted by the historical event that saw the Pope Benedict XVI

Saint Peter is preparing to welcome a crowd that joins the television crews from all over the world who have been barricaded for a few days now so as not to miss anything of what is happening near the most famous basilica in Rome and in Christianity. Mayor Gianni Alemanno declared that he is ready to sign an ordinance that entrusts all the management of the events that will lead to the Conclave, around the middle of March: from the brigade to the Atac, from Ama to Civil Protection welcoming tourists on TV and foreign press.

In the meantime, whoever is looking for a front row seat to be among the spectators of what will happen in San Pietro, should not miss the opportunities to stay in the Eternal City in one of the hotels left free. Here is ours top 3 hotels in the San Pietro area.

Curiosity: the abdication of a Pontiff in history has only happened 7 more times, the last was Gregory XII in 1415, but the most famous is certainly Celestino V in 1294, a few months after his election he abdicated and for this Dante placed him then in Hell in the circle of the Ignavi.

Audio Video Sleeping in San Pietro for the election of the new Pope
Verona in Love, Valentine's Day in the city of Lovers ❯