An ancient city rich in history, unmissable to get lost in the streets of the old city or in its manicured gardens that seem straight out of a storybook: six places to visit in New Delhi.

The chaotic Indian capital it is often named for being noisy, dirty and super polluted, ignoring how ancient and rich in history it is, getting lost in the streets of the old city or in its manicured gardens that seem straight out of a fairytale book. You certainly cannot remain indifferent to her. 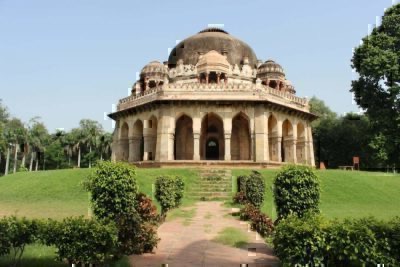 A haven of peace and greenery in the heart of the city. What you immediately notice when visiting New Delhi is the infinity of green that mixes with the metropolis. Tidy parks, roundabouts set up like small gardens with fountains, functional pedestrian walkways. In the Lodhi Gardens you will find the tombs of the rulers of the Sayyid and Lodi dynasties, very ancient but well preserved and ideal as a backdrop for taking photographs. In fact, this area is very popular with Indians, especially on their honeymoon, because it offers a magnificent view and a lot of quiet.

That is the gateway to India, this majestic arch that fascinates at first sight was built to commemorate the fallen of the wars of 1914-1921 that involved India. It took 10 years to see the finished work. Think that it measures 42 meters high and rests on a red stone base. From 19.00 to 21.30 you can admire the arch illuminated with the colors of the Indian flag. 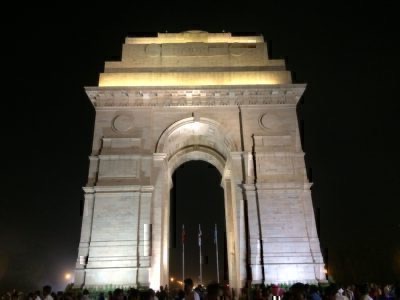 The largest mosque in New Delhi is also the most famous in all of India, located at the very beginning of the Chawri Bazar Road, a central road always congested by traffic. In its courtyard it can accommodate 25.000 faithful and an ancient copy of the Koran is kept inside the mosque. To build it it took the sweat of 6.000 workers and the duration of 6 years to see its completion. It cost 1 million rupees!

Located in Old Delhi it is one of the most popular destinations to visit, hosting millions of visitors a year. It brings together the traditions of Islamic, Persian, Hindu and European architecture. The name Lal Quila or Forte Rosso is due to the fact that it is built in red sandstone, with a height between 16 and 33 meters. In the Fort you can admire the imperial audience hall with the famous Peacock throne, inlaid with precious stones and white marble, the private apartments connected to canals called “del Paradiso”, which draw water directly from the Yamuna river. 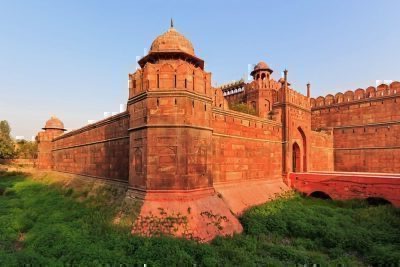 It boasts the distinction of the largest temple in India and represents world peace. Opened in 2005, it mixes different architectural styles from Orissa, Gujarat, Rajasthan and Moghul. The colors chosen to build it are pink sandstone, a symbol of devotion and white marble, a symbol of purity. Incredible sculptures adorn the interior of the temple but unfortunately photography is prohibited and controls are strict because this temple enjoys important protection. 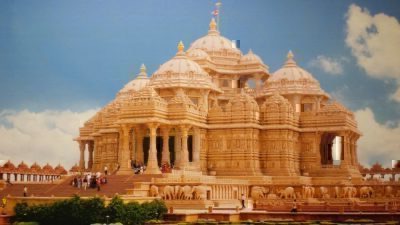 73 meters high minaret formed by 5 tapering floors, it is famous for being the tallest brick minaret in the world. Inside there is a spiral staircase with 379 steps. The architectural style is mainly of Iranian origin but the minaret model is based on the example of another minaret found in Afghanistan. Some time ago it was possible to access the top of the minaret, but after a serious accident in 1981, it was decided to deny tourists access to the tower.

What to eat on a trip to India

5 recommendations before a trip to India

What to see in Northern India: the Rajasthan of the maharajas

add a comment of New Delhi, six places to visit