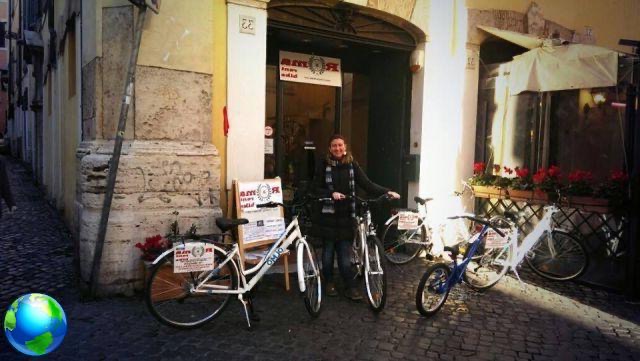 Turn to Rome by bicycle it is not something recommended by the Romans, by now we know. There will certainly be reasons why so many Romans do not go by bike and prefer to take the subway and car, but yesterday by trying Rome rent bike, we just couldn't find them.

The premise is to tour Rome exclusively in its historic center, to fully enjoy this service. Going beyond the center is a bit risky, not so much for how you drive in Rome, but for the lack of cycle paths in the streets. A lack that only a cyclist, or a person accustomed to using two-wheeled vehicles, knows.

The Roma rent bike store is located in few steps from Campo de 'Fiori, precisely in Via di San Paolo alla Regola at number 33. The rental point and also the sales point have recently opened, on December 8, 2013 to be precise and you can see it in the shop. It smells new and the bikes are all in excellent condition, more than new, some still never used! An excellent opportunity therefore to tour Rome on a brand new bicycle. In addition to this, there is another clarification to be made. The bicycles are Olmo. Fans of the world of cycling will know the brand very well. A Ligurian company famous for its beautiful and fat bicycles. The bikes are for men and women of course, with a version with a basket too.

For those who have children Roma rent bike offers bikes with saddle but also tandem with a larger bike and a smaller one behind connected to the first. Finally there is also the possibility of taking the bicycle and leave it in another area of the city, obviously first by agreeing with Francesco, the owner of the shop. The location of the store is very valid, also a stone's throw from the Lungotevere which offers a beautiful cycle path where you can ride undisturbed for kilometers in one direction or the other.

Francesco also organizes gods historical tours, on Roman Rome and Renaissance Rome, being a historian lent to cycling, if we want to define it that way. Roma rent bike is open every day from 8.30 to 19 and the cost of the bike rental is 5 € for one hour, 12 € for 3 hours and 15 € for a full day. The two tours instead cost € 40 and will keep you busy for about 3 hours.


An interesting service is to make yourself deliver the bicycle home or wherever you want for the price of 5 €. If you arrive in Rome by train and want to get around the city by low cost bicycle, all you have to do is write to Francesco and have the bike delivered directly to where you want. The last option is that of the rickshaw. For families or groups of friends who want to explore the center of Rome together, in the true sense of the word, the rickshaw allows you to go around together without getting lost. Brilliant isn't it? :)

add a comment of Rome rent bike, bike rental and tours in Rome