Rome, a mini guide to not miss anything 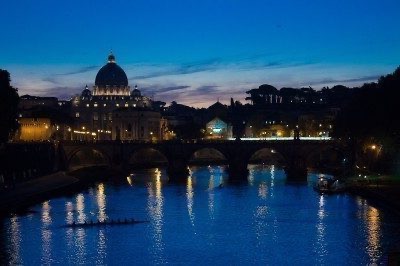 Rome in the course of history it has become one of the major capitals by extension of the territory. The city stands on seven hills and is crossed by two rivers the Tiber and the Aniene, moreover it is the only city in the world to host a foreign state within it. Vatican City.

Rome enjoys a temperate weather typically Mediterranean, warm summers and mild winters, therefore suitable for holidays all year round, obviously the best time in my opinion is spring.

As for transport, the city is served by two airports, the first intercontinental Leonardo da Vinci, but better known by the name of Fiumicino, name given by the municipality that hosts it about 30km from the city, then we have the international airport of Giovan Battista Pastine known as Ciampino. While in Fiumicino several companies land daily such as Alitalia ed Easyjet, in Ciampino you can only use low cost airlines such as Ryanair. As for transport, we remind you that Rome is the main railway hub in central Italy. In addition to the station Terms, there are other stations such as Tiburtina, Ostiense, Roma Trastevere and Roma Tuscolana.

The Rome metro has two lines: line A (yellow) and line B (blue), while lines B1 and C are currently being completed, in order to complete the network of connections in the city that will be added to the transport on rubber and rail already present.

Rome is full of museums, monuments and squares to visit among the main ones include the Vatican Museums with the Sistine Chapel, the Capitoline Museums, the oldest in the world open to the public since 1734, Piazza Navona, the Coliseum, the Pantheon, Piazza Venezia e Spanish Steps, without forgetting St. Peter's Basilica and the other hundreds of places that can be visited. But Rome is not only what we see on the surface, but under the city they develop for hundreds of kilometers catacombs, ancient Jewish and Christian cemetery areas dug into the tuff.

Rome hosts many every year private events which attract tourists from all over the world such as the International Film Festival held in autumn, the Biennial of International Art and the Roma Europa Festival.

Rome is also the capital of Shopping, in addition to the exclusive streets of the city, where the boutiques of the big names are concentrated, such as via Condotti, via del Babuino and via Ripetta, there are many shops and shopping centers, moreover there are two outlets outside Rome Castel Romano and Valmontone, ideal for making affordable purchases all year round.


The last thing I will talk about in this mini guide of Rome is the Roman cuisine. The most famous dishes are the bucatini all'amatriciana, based on bacon and tomato, spaghetti alla carbonara, with bacon, pecorino cheese and eggs, but also the various soups based on vegetables and legumes. Famous in Rome are also dishes such as tripe, kidney and offal.

Among the restaurants where it is possible to eat the typical dishes of the Roman tradition are the trattorias and the most famous is Sora Lella, a restaurant located on the Tiber Island in via Ponte Quattro Capi 16. Rome is also to be remembered for the Roman square, thin and crunchy compared to the Neapolitan one and here the prince of the square is undoubtedly Mustache, pizzeria in via del Governo Vecchio 114.

Audio Video Rome, a mini guide to not miss anything
What to see in Vancouver, the most beautiful attractions ❯

add a comment of Rome, a mini guide to not miss anything