With its countless hills and its spectacular bay, San Francisco seduces with its beauties, the lively neighborhoods and the sociability of its inhabitants. From the exclusive Mission District to the glamorous Castro, from bustling Union Square to Chinatown, this dynamic city thrives on variety. Beat Generation writers, Summer of Love hippies in the late 1960s, and the gay / lesbian population helped make the city what it is today.

The city occupies a prime spot between the Pacific Ocean to the west and the Sierra Nevada Mountains to the east, between the redwood forests to the north and the California desert to the south. San Francisco, like New York, proudly displays its prestigious monuments, symbols known all over the world such as the Alcatraz prison or the famous Golden Gate Bridge. Victorian houses, period buildings and some historic skyscrapers make up its urban landscape.


This Californian city is also one of the most important destinations for catering in the world, thanks also to the different cultural influences and the abundance of fresh ingredients. Its restaurants, eclectic nightlife and major cultural attractions create a youthful social scene, ideal for experiencing one of the most carefree and enjoyable urban experiences on the American continent.

The size of San Francisco they are not exaggerated, so it can be easily explored on foot and using the numerous public transport. The main points of interest are clustered north of the San Francisco peninsula.

Getting around in San Francisco

San Francisco is located on the west coast, north of Los Angeles, on a peninsula bordered by the Pacific Ocean and San Francisco Bay. The city is connected to the American continent to the south by the mainland, and to the north and west by two bridges, the Golden Gate Bridge and the San Francisco Oakland Bay Bridge.

Due to its small size - only seven miles by seven - San Francisco can be explored quite well on foot or by public transport, BART (Bay Area Rapid Transport).

The car brings with it the difficulty of finding parking. So if you decide to rent a car, make sure you choose a hotel that has free on-site parking.

When to visit San Francisco

San Francisco can be visited comfortably at any time of the year. The weather rarely gets too cold or too hot, and it is often mild in February as well as in August. That said, the seasons here don't exactly match other parts of the country. Even in the summer, a cool day can happen, so dress in layers even if you're traveling in July or August. Near the sea you can feel the wind enough, which makes you feel a few degrees less temperature, so always take something warm to cover yourself like a scarf or a sweatshirt.

Winter is moderately cold, although freezing temperatures are rare. Winter days can be particularly rainy. If you want to avoid the rain you should avoid choosing the months of January or February. The best month to visit the city is October, although March to December is always a good time to visit San Francisco.

Alcatraz - the infamous former prison, is located on the island of the same name, in the middle of the San Francisco bay. Some of the most famous criminals in the United States have been "guests" of this prison. Although many have tried, no inmates have managed to escape from "The Rock". The prison was closed in the 60s, but the stories and legends about Alcatraz still remain.

Golden Gate Bridge - the most famous bridge in the world, it manages to impress even the most experienced travelers with its extraordinary length of almost 3 kilometers. Around 120.000 cars drive through it every day. A pedestrian walkway also allows crossing on foot, while bicycles are allowed on the western side. The Golden Gate Bridge is said to be one of the most photographed things on Earth.

Fisherman's Wharf - it is one of the most famous tourist areas of San Francisco and an excellent starting point to start visiting the city. Once San Francisco's Little Italy, it's an area known for its shops, restaurants, and beautiful waterfront settings. Some of the main attractions in the area are Madame Tussauds Wax Museum and Ghirardelli Square. Restored XNUMXth and XNUMXth century ships line the Hyde Street Pier waterfront. The USS Pampanito, a National Historic Landmark, is a World War II submarine and is part of the San Francisco Maritime National Historic Park.

Pier 39 - Fisherman's Wharf is also home to Pier 39, a festive waterfront market that houses over 130 shops, and charming, atmospheric places to eat. From here you can enjoy a beautiful view over the city. A community of California sea lions dwell on the floats at Marina Pier 39, as visitors and onlookers try to take their picture with these beautiful and funny animals from the railing of the pier.

Cable Cars – Cable cars were introduced in 1873 to help the inhabitants climb the many hills on which the city is built. Today, the few remaining cable cars offer tourists a great way to historically explore the city. These tram-like vehicles have the distinction of being the only public transport system to have been declared a historic monument. The Powell-Mason e Powell-hyde are the most scenic routes. Cable cars will also take you to major attractions such as Fisherman's Wharf, Ghirardelli Square, Ferry Building, Nob Hill e Lombard Street. If you have more than a couple of rides planned or are going to be sightseeing for a few days, you should consider purchasing a pass.

Lombard Street: the famous road made up of steep hairpin bends surrounded by flower beds.

City Lights Bookstore: the most famous bookshop in the city.

Bay bridge: also called San Francisco-Oakland Bay Bridge, is a suspension bridge that connects the city to that of Oakland on the eastern shore of the bay, across the San Francisco Bay. To the east the toll is free, while to the west the toll is $ 3.


North Beach – the Italian quarter of the city is not a beach at all. It's a neighborhood of romantic European-style sidewalk cafes, restaurants, and shops, close to Washington Square, along the streets of Columbus and Grant. The beautiful Church of Saints Peter and Paul is a point of reference. Coit Tower on top of Telegraph Hill offers a splendid vantage point for photos of the bridges and the bay. Inside the tower, floor-to-ceiling murals painted in the 30s depict early 900s San Francisco.

Twin Peaks – These two unique, uninhabited hills, more than 900 feet high, aren't actually the tallest of San Francisco's 43 hills. They offer one of the best views of the city and the bay, and are easily accessible. It is advisable to reach the parking area of ​​the north peak to enjoy beautiful views and hike along the trails.

Chinatown - the entrances to Chinatown located on Grant Avenue and Bush Street are called “Dragon's Gate”. Inside are 24 blocks of Chinese folk shops and businesses. Most of these are located along Grant Avenue, the oldest street in San Francisco. This "city" within a city can be easily explored on foot. You can find everything here: exotic shops, renowned restaurants, food markets, temples and small museums.

Union Square – Located a couple of blocks north of Market Street and southwest of the city's financial district, Union Square is in the heart of San Francisco. This area is loved by travelers and locals alike for its fantastic location and incredible liveliness. Union Square Park is lined with tall buildings (some of which are adorned with Time Square format ads) and busy streets, giving people the unique opportunity to sit in the middle of a busy city and soak up the atmosphere. The square also serves as a park, equipped with small grassy areas and palm trees. A short distance away you can also visit the Financial District which is home to one of San Francisco's iconic monuments, the Transamerica Pyramid.

Mission District – This area has attracted San Francisco's young bohemian crowd for the past decade, but still retains the authentic Mexican local vibe. The funky neighborhood has a great vibe and is full of interesting murals. For an excellent view of the city, head to the nearby hill of Bernal heights. In the surroundings there is the Dolores Park, the most popular place for sun worshipers, on fog-free days.

Out of town attractions - The wonders of this region extend beyond the city limits. If you have some time, you can visit the picturesque seaside village of Sausalito, north of the Golden Gate Bridge, or the natural wonders of Marin County such as Stinson Beach o Muir woods about an hour from the city.

Discover all the attractions of San Francisco

To sleep in San Francisco there are various and excellent hotels. Prices are very variable and quite high in the center, while as you get closer to the periphery the prices drop significantly.

Union Square and Fisherman's Wharf are the places with most of the best hotel deals in the city. A little more peripheral, there are cute, small hotels that offer some of the best views over the city, if you don't mind climbing the hill. Warning: good seats aren't cheap and really cheap seats aren't good. Read the reviews carefully before making your reservation.

Hotel prices in San Francisco are subject to a city tax of approximately 15%. This is not always included in the listed prices and can be added to your bill at checkout.

You can also get from Spain to San Francisco by direct flights, although the flight can be quite long. There are both scheduled flights, But also low cost flights leaving of Madrid and Barcelona. If you want to depart from other Spanish airports, you have to charge at least one stopover.

To get to the city from these 2 airports you can use the BART public transport. 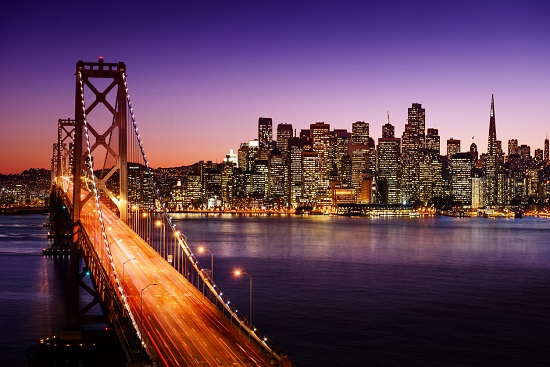