Where to eat goulash in Budapest

Goulash is one of the typical dishes of the Hungarian tradition and it is not always easy to identify the places to eat it cheaply and well, we recommend three. 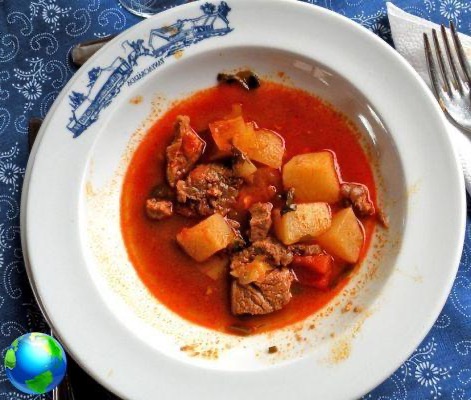 The history of goulash is almost impossible to define, it is a historical dish of a more or less precise area of ​​Eastern Europe, and wanting to define it or attribute it to some specific area is like trying to give a city to some dish of our Regions . It is known that it was a goulash poor dish that herdsmen they prepared when they moved from Puszta to the various markets of Western Europe.


I have to tell the truth, I haven't been able to make it again at home yet, also because I'm looking for a good recipe. One of the real ones I mean. On the other hand, when I went to Budapest I had the opportunity to try it and try it again several times, let's say that I ate it every day, if nothing else I had a good feast and now I can resist at least a little, but I plan to try to do it soon. 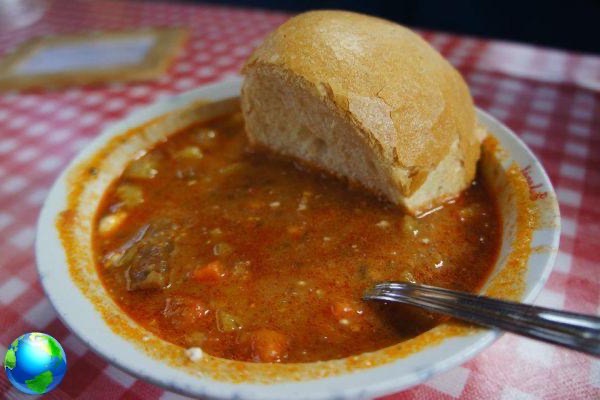 In every club, restaurant and pub in Budapest, you will undoubtedly find goulash on the menu. As a dish of the day or as a fixed dish, it doesn't matter goulash reigns supreme at every table in Hungary and any self-respecting kitchen will certainly be able to bring you a portion. It is usually taken as an appetizer, especially if it is a "tasting", but in some menus it also appears as a second course, as a real soup that you can eat even after a salad or a more substantial first course. Despite the term soup, it must be said that goulash is caloric and also rich. In fact, if we go back to its history, we understand that to give all the energy that the herdsmen needed, adding the temperatures that are not always friendly, we understand why.

Goulash, first of all, is made with beef, carrots, potatoes, tomatoes, peppers and strictly sweet paprika. The spicy goulash in fact not given by paprika as you might think, since paprika in Hungarian means pepper.


To eat excellent goulash I recommend three premises in Budapest where to go both in the evening and for lunch. 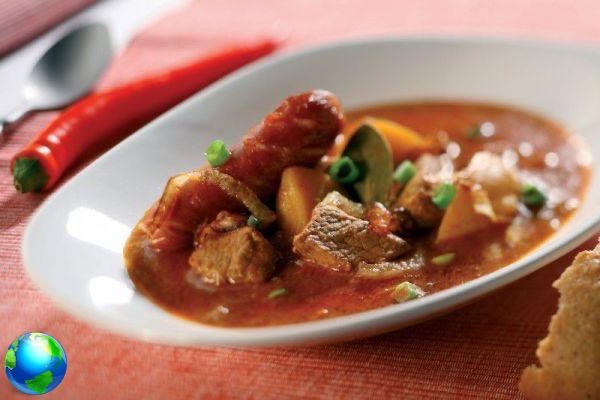 - Két Szerecsen the most beautiful place I've seen in Budapest is this. It is located in Nagymezo u. 14 and the goulash soup is 3.50 €. The place is very nice and stylish but the prices, as in all of Budapest, are low. In addition to the goulash, which I highly recommend, also try one of the desserts. The staff is very kind.

- Spinoza Dob utca 15 is located in the center of Pest. The place is a very nice bistro with a pianist who will cheer you up in the evening until about 22 pm, unfortunately at 23 pm the place closes and therefore also the kitchen. The goulash here is special, but if I were you I would also try bean soup. Highly recommended for a relaxing evening and a bottle of good wine (which costs less than beer in Hungary!).

- Castro Bistro it is a place that you will not find in the classic guides, it was recommended to us by a friend of the place. In this restaurant the tables are for 2 or 5 seats and more. It may happen that you sit down with tall people, eat side by side with those you don't know, don't worry, here the watchword is relaxation. Any cuisine would be worth a mention and the goulash is no exception. Castro Bistro is located at Madách Imre tér 3.

Audio Video Where to eat goulash in Budapest
Suite at 49 € in Rome with Blink Booking: Augusta Lucilla Palace ❯

Green holidays on the Danube Bend in Hungary

Street food to try in Budapest

Where to sleep in Budapest: Minestrone Apartment

add a comment of Where to eat goulash in Budapest