In Girona in Baden-Württemberg 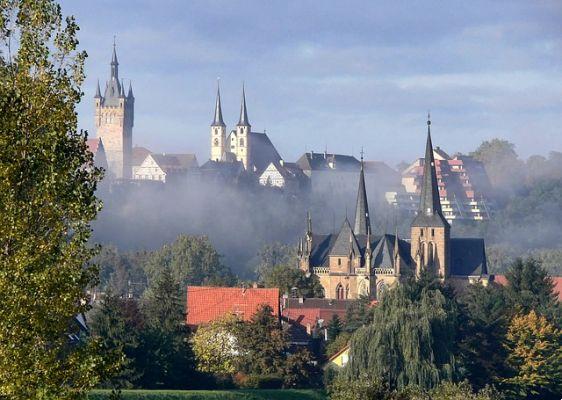 In mid-September we took a four-day trip to some cities in this federal state of Germany.

To us there Germany very popular for its natural beauty, its cuisine, its cleanliness, its architecture, its order, its precision, its safety.

A few months earlier I had found a new link from Ryanair da Bari per Karlsruhe. I made a booking simulation and, given the affordable price, I decided to buy the flight.

There is also a direct flight departing from Rome.

Karlsruhe it is located in the Black Forest, between France, Austria and Switzerland and therefore easily accessible for those who live in the North. Ryanair return flight € 65 for two.

Reservation ofAmbassador Hotel means Booking.com (94 € per day for a double with a super breakfast that allowed us to skip lunch).

You arrive at the airport of Baden-Baden, about 40 km from Karlsruhe which can be reached by bus 205 (not on holidays and after 21pm) or, again by bus 205, you have to go to the Baden-Baden station where you can take a train that in a few minutes will take you to Karlsruhe.

We opted for this solution for both the outward and return journeys, spending a total of € 5,20 each way, each (the ticket is called Einzelfahrkarte Erwachsener). 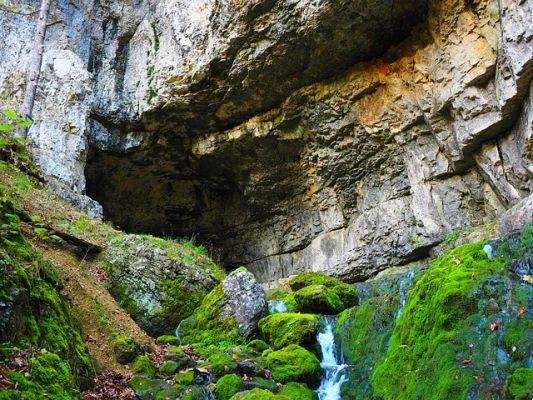 To move around the city and also in neighboring areas we used the numerous and very frequent trams by purchasing the Cityplus24, a ticket valid 24 hours from the moment it is validated and which can be used up to a maximum of 5 people for the price of 7,40 , € XNUMX.

Our hotel was very close to the most important commercial street or the “Kaiserstrasse”: a very long street full of shops, cafes, restaurants and well served by very frequent public transport.

From here you can easily reach the Castle from which the streets of the city in the shape of many rays depart and from which the name of fan streets is derived.

There are two legends related to the construction of this royal residence. 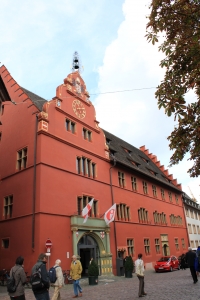 Carlo Guglielmo of Baden-Durlach, during a hunting trip, he fell asleep in a wood and dreamed of a castle from which many roads departed, like the rays of the sun.

The other legend says that Carlo Guglielmo wanted to have the castle built near the wood to stay away from the troubles of everyday life.

And hence the name of the city: Karls = Carlo and ruhe = tranquility and therefore literally “Carlo's rest”.

The castle is very beautiful and is surrounded by a huge park where people can walk, ride a bike, lie down in the shade of gigantic trees to rest or read a book, or cross it on a small train.

There is also a pond where many ducks swim.

From the castle, next to which stands the Majolica Museum, the majolica road starts, a straight path made up of blue majolica tiles that will lead you to the majolica factory

The way that leads from Marketplace al Castello was renamed in 2005 Fundamental Rights Square and 24 panels contain extracts from the Constitution and citations from judges and other citizens.


Things to see and places to visit

In Market Square there are numerous stalls of florists and I have noticed that German women love flowers very much because almost all of them, of any age, stopped to buy flowers or plants.

Also on this square stands the beautiful Town hall (town hall), with lots of “Parisian geraniums” full of pink flowers on the windows.

Here is also the Piramide which stands above the tomb of the founder of the city.

Opposite is the Tourist Office where I bought the tickets for the trams.

Another can be found in front of the Hauptbanhof (train station) while next to it there is the Information Office KVV where I found a very helpful, kind and competent elderly employee who advised me to buy tickets, saving me a lot.

Another positive aspect of the Germans, which we really appreciated, is their courtesy: we often stopped to take a look at the city map and several people asked us if we needed help.

About 1 km from marketplace there is the huge and beautiful shopping center “EttltingerTor” where I could not help but delight with a slice of the cake Black Forest and a cup of hot chocolate with cream. 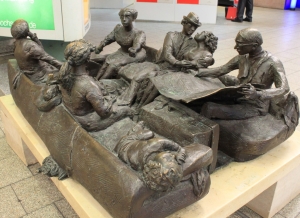 We had dinner in several restaurants but, strange thing, here in Karlsruhe, we could not find the very tasty German sauerkraut and sausages.

On the other hand, we drank excellent beer, both blond and dark, I really liked the spätzle which are irregularly shaped dumplings and the famous breaded slice they call Wiener Schnitzel and that we also prepare in Spain.


One afternoon we decided to go to Ettlingen because I had read that it was a very nice village and in fact walking through its medieval streets, where numerous bistros overlook, was a pleasant experience.

We reached it after about ten minutes with tram N ° 2 (we have always used our Cityplus24).

The two main monuments are the Castle, and the Church of San Martino. We also loved the Rathaus. Streams of water scattered here and there, bridges, and flowers, lots of flowers everywhere.

The next day I had planned a tour to Freiburg, a city that rises at the foot of the. Black Forest.

A month earlier I had purchased train tickets via the internet because the German Railways offer discounts on early bookings. I spent about 60 euros a / r for two.

Just go to the website of the DB Bahn, make a travel simulation, choose the most convenient rate and then, if it suits us, make the actual reservation which will be paid by credit card (I use Post Pay) and the ticket will be delivered directly to your home. The journey lasted about an hour.

At Karlsruhe station we were drawn to one sculpture dedicated to travel by train. 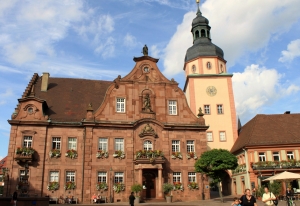 It represented several types of travelers who can meet in a compartment: one who is all intent on reading his newspaper, an engaged couple embracing, a child sleeping in a corner, two women offering each other to drink and eat and a lonely traveler who has his gaze turned towards the window to admire the landscape or think, meditate.

Once we arrived we headed towards the center.

Along the way we admired the houses of the past with various colors of plaster, many gardens, and many fashion shops, commercial galleries, boutiques. In front of the Church of S. Martino the old and the new rise Town hall, (photo above) two beautiful buildings as well as the two stupendous medieval gates (S. Martino e Schwabentor).

The symbol of the city is the Cathedral in gothic style, in pink stone, the construction of which took about 300 years. The flower and food market is held in the surrounding square.

Here and there of buskers.

The flower market struck me a lot because there were flower arrangements of the most varied shapes that German women bought in large quantities.

On the side stands the red one department store, old commercial customs building.

In Franziskanergasse the house where Erasmus lived is located Rotterdam.

I Brooks are the channels that cross it and that give it a magical touch.

For those with children, not far from Freiburg, there is theEurope-Park, the second largest amusement park in Europe.

Walking through the canals we found a brewery where excellent beer was produced and here, finally, we were able to eat sauerkraut with excellent sausages.

Freiburg it is also home to a famous one University.

The next day we went to Baden-Baden, a charming town that owes its fame to the thermal baths.

We headed to the KVV information office, next to Karlsruhe central station, and the clerk advised us to buy a ticket region plus, valid for 24 hours, usable up to 5 people, at a cost of 14 euros a / r for both.

The strange thing is that we took the tram (it seems to me number 2) which then turned into a train.

Downtown Baden it is about 5 km from the station of the same name so we had to take an urban bus.

When we arrived at our destination we immediately noticed that among the passers-by there was a lot of elegance and refinement.

The facade of the theater that you see on the left is also elegant. 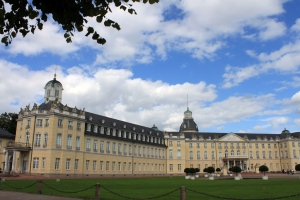 All the emperors and the powerful of Europe have been to Baden-Baden not only to rest but also to combine alliances or to strike up plots.

Chancellor Bismark he used to say that if he was told the end of the world he would take refuge here because things happened two weeks later in Baden-Baden.

“If Paris was the capital of European politics in winter”, the Badense writer Gustav Faber stated, “Baden Baden became one in the summer with the charm of a small town and the breath of a great world”.

The last hours of Sunday, as we had the flight in the afternoon, we have dedicated to the visit of Zoo di Karlsruhe.

It is located right in front of the Banhof.

Entrance tickets are not as expensive as those of the Cologne Zoo.

We spent 6 euros in two.

At the entrance there are beautiful fountains and in one corner you can already see a group of long-limbed pink flamingos.

Further on, there is a small lake with colorful ducks and sailboats controlled by canvas on which it is possible to take a tour of the lake. Lions, camels, bears, penguins, camels, monkeys, various birds: their natural habitat has been recreated for all.

And finally a beautiful Japanese garden and a rose garden with plants of all colors. In this area of ​​Germany, during popular festivals, women wear the local costume and on their heads they wear a hat with three balls of red wool if they are single or of black wool if they are married.

Everything is ephemeral and so is our vacation. In the afternoon we reached the airport and in the evening we returned to Bari. But we will return because we like Germany very much. 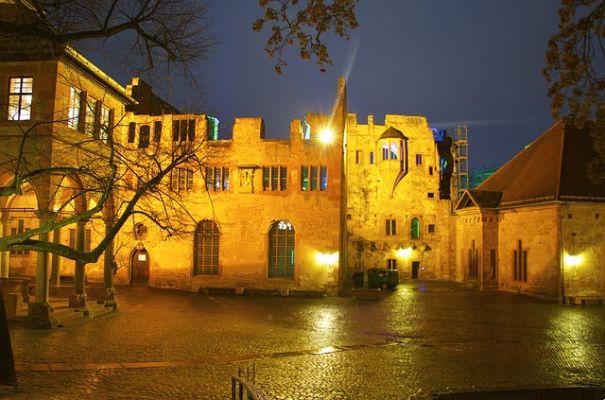 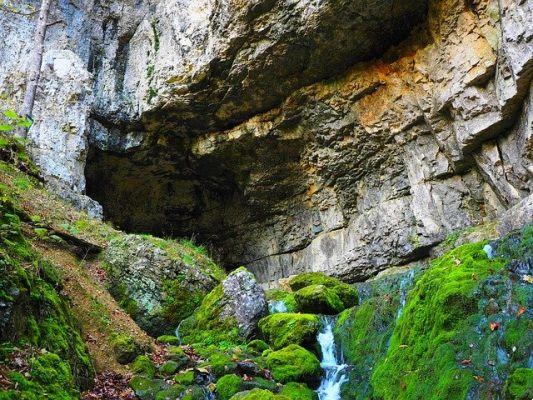 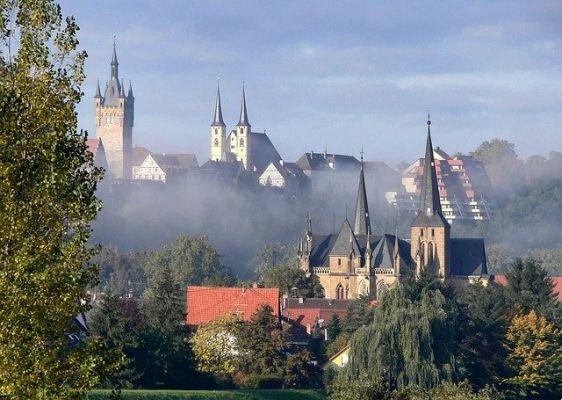 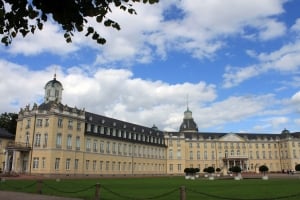 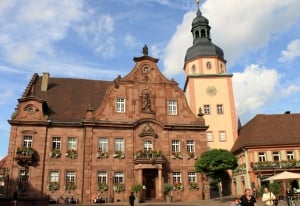 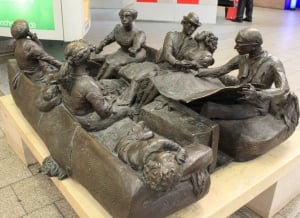 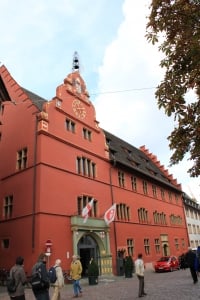 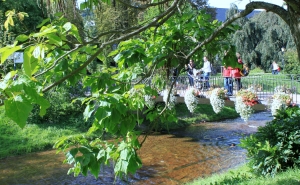 Rühstädt, the city of storks in Germany

Germany by train, how to discover it low cost

Hackesche Höfe in Berlin: courtyards and alleys in Art Noveau

Savory breakfast in Munich for € 7, at Rubenbauer's

Romantische Strasse, 4 stages on the itinerary