What to see in Cologne

Taking advantage of one of Ryanair's many offers, I bought (for the price of a pizza or a little more) a return flight to Colonia to spend a weekend there and I must admit that I really liked it. Apart from Berlin, I know little of Germany and I was happy to discover a young and lively city with many attractions that are not bad. Overlooking the banks of the River Rhine in northwestern Germany, Cologne is the modern and charismatic capital of the Rhineland, the region which also includes Leverkusen, Düsseldorf and Bonn. Despite the terrible bombings of the Second World War, which destroyed over 90% of the buildings, Cologne remains the seat of an important university and the largest gothic cathedral in Northern Europe. The Cathedral is the most prestigious symbol of the city and, according to tradition, houses the relics of the Magi. It was named a UNESCO World Heritage Site in 1996.

Cologne is also the city that lends its name to famous perfumed lotion, cologne, invented in the eighteenth century thanks to the proverbial ingenuity of an Italian immigrant (so much for a change!), Giovanni Maria Farina. Cologne water is still produced according to the original recipe, and marketed by two companies that were, in the past, at the center of a dispute over the authorship of the recipe. 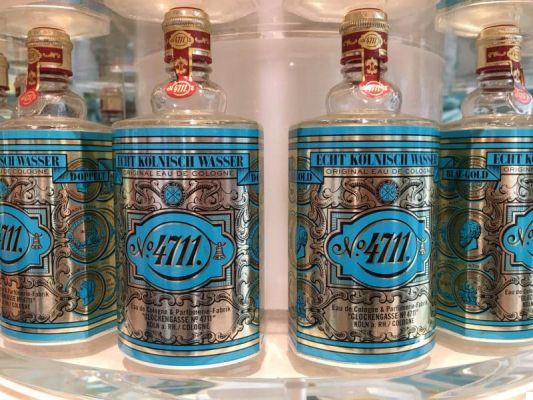 How to reach Cologne and how to get around

Cologne is easily accessible with low cost flights. Once you have landed, a short ride of about 15-20 minutes (at a cost of € 2,70) on a urban train you reach the central station which is located right in the heart of the city, next to the Duomo. To move around the city, you can see practically everything by walking, without the need for additional means of transport.

Where to sleep in Cologne 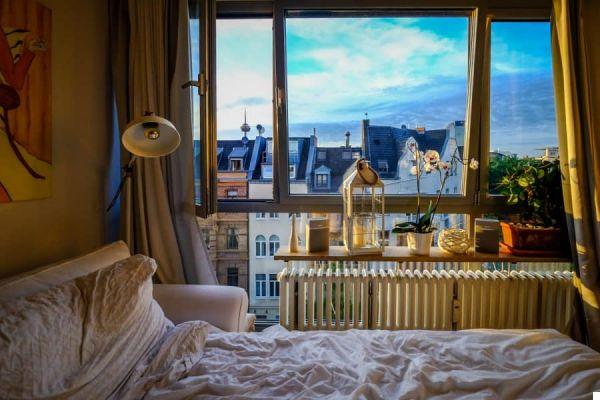 What to see in Cologne

Mini cruise on the Rhine river

To get an idea of ​​the city, there are 2 things worth doing as soon as you arrive: a free tour of Cologne (lasts 2h30 'and is in English) and one mini-cruise on the Rhine. The latter lasts an hour and allows you to admire the buildings that rise along the banks of the river, accompanied by tourist guides who tell about the city and its architecture. The pier is located in the heart of the old city, a few minutes walk from the Duomo, and tickets cost 12 euros per person. The boat sails at different times during the day and you can book / buy it from this site. There are also some sunset cruises which last 2h and you can book them from this other site. 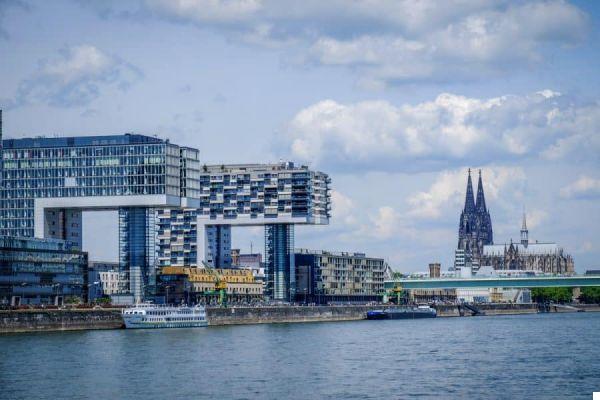 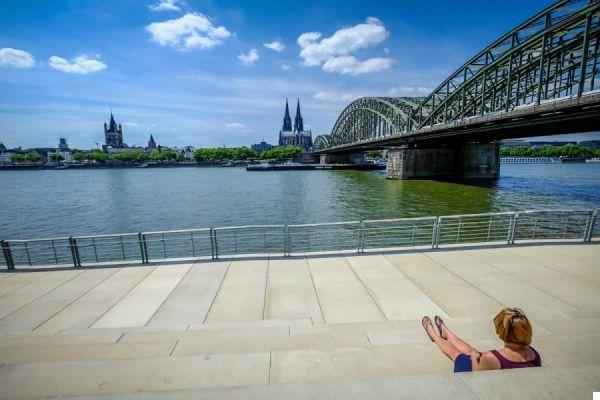 Cologne Cathedral, with its cuspidated towers that rise to over 150 meters, is the second largest church in Germany and the third highest in the world. This important gothic monument is one of the main attractions of Cologne and is a must for any traveler who comes here. Its construction began in 1248, in an area previously occupied by a Roman temple dating back to the 600th century.It took more than XNUMX years to complete the construction of this majestic building which was designed to house the relics belonging, according to tradition, to the three Magi. The remains of the Magi, whose reliquary represents an exquisite example of Mosan art, were delivered to the Archbishop of Cologne Rainald von Dassel in 1164 by Frederick Barbarossa. You can find more information on the opening hours and the characteristics of the cathedral in Official site.

Located close to the Duomo, the Ludwig Museum represents an obligatory stop for all lovers of modern art and beyond. This elegant structure houses some of the most important works belonging to Pop-Art, abstractionism and surrealism. The museum displays various works by Warhol and one of the largest collections in Europe of the works of Pablo Picasso. For timetables and more information visit the official website of the museum. 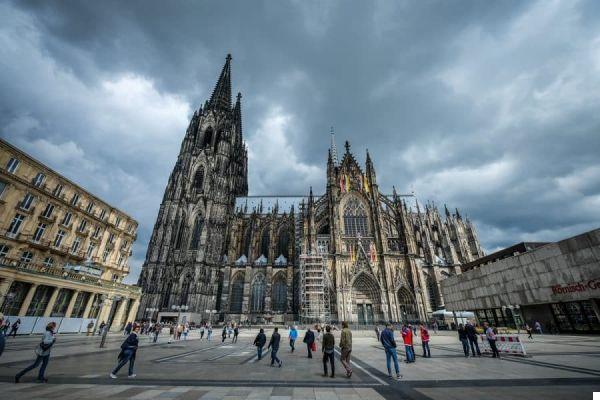 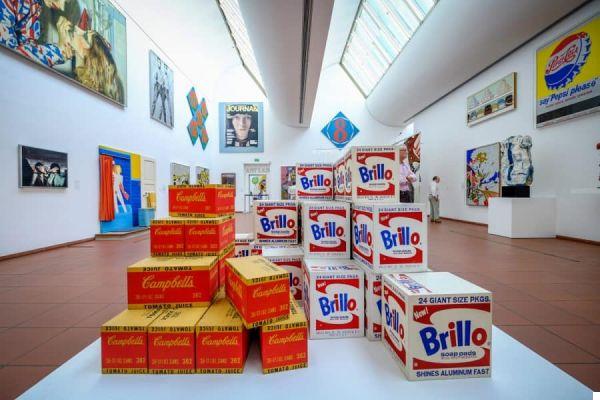 Walking tour of the downtown districts

Walking around the city is undoubtedly the best way to discover its most authentic corners. Some of the most interesting stops are there Severine Street, where there is a neighborhood full of bars and restaurants with a magical atmosphere and a touch of ethnicity. Also not to be missed is the Belgian quarter, which arises around Brussel Square, where you will find an infinity of clubs and bars in addition to the legendary At Grandma Kleiman's, the paradise of the “shnizel” breaded cutlet, always disputed between the Teutonic and Milanese culture. Even the historic center around the cathedral, between alleys and squares, is ideal for walking to admire its beauties.

Il NS-DOK center it is a touching but obligatory stop if you are in Cologne. NS-DOK studies the history of the city during the Nazis, and operates as a memorial dedicated to the victims of the Reich. Since 1988 the center is housed in the EL-DE Haus building, which it was the seat of the Gestapo between 1935 and 1945; you can also visit the ten cells in the basement, where the Nazi secret police imprisoned and tortured dissidents. The center is open to the public every day from 10.00 to 18.00, and from 11.00 to 18.00 on holidays. Here you will find all the information about NS-DOK. 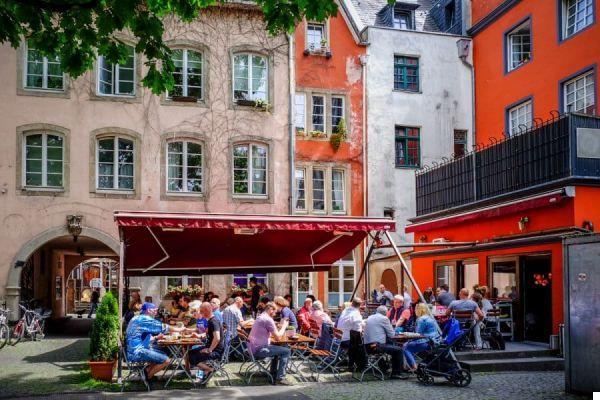 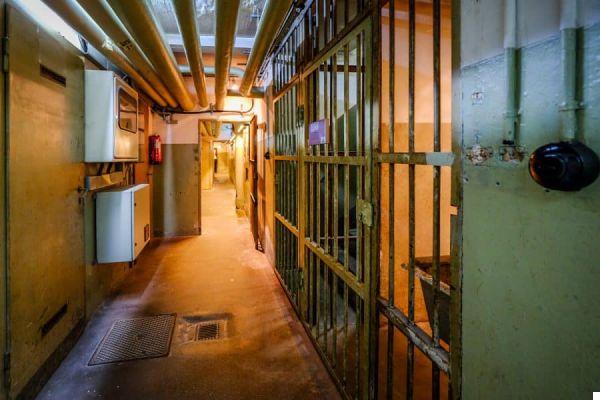 What to see outside Cologne

Easily accessible from Cologne, the small town of Aachen it is located near the tri-border between Germany, Belgium and the Netherlands. Aachen is an important spa center as well as an ancient one seat of the court of Charlemagne, who had the famous one built there cathedral became a UNESCO heritage site in 1978.

Where to eat in Cologne 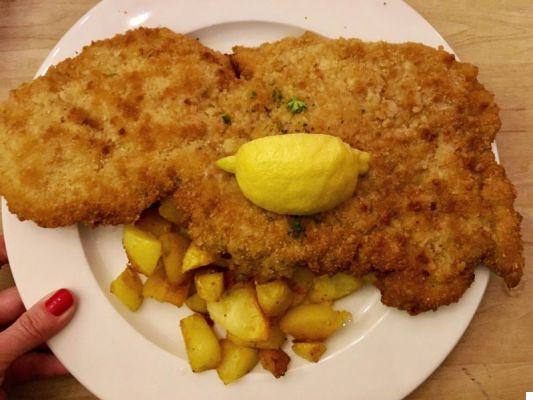 What to see in Copenhagen in 3 days ❯

Berlin Wall, 20 years after the fall

Romantische Strasse, 4 stages on the itinerary

Oktoberfest: 3 rules to survive the party

The 10 most beautiful museums in Berlin

Plus Hostels in Berlin, hostel in the East Side Gallery

add a comment of What to see in Cologne