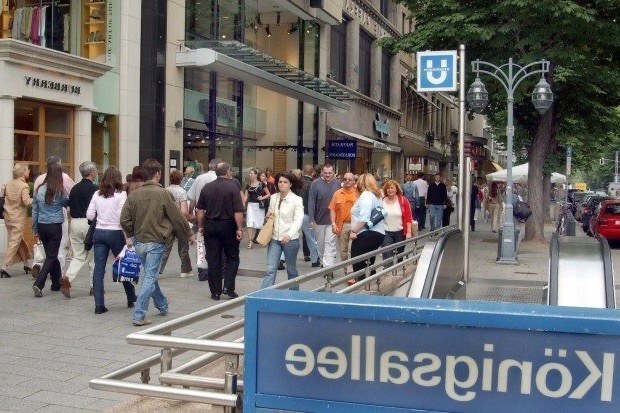 Dusseldorf is one of the cities to be included in the list of those already found under the heading "weekend-shopping“, Which certainly makes it interesting to spend two days on and off, especially during the sales period!

The starting point is the Heinrich-Heine Allee metro stop, very central and true watershed between the ancient area that Old town and modern Kö. From here you can't go wrong: looking south along the main street where you come out of the metro, it is easy to spot the differences between the historic district on the right and the elegant one on the left.

The first, pedestrianized almost in all its extension, welcomes fashion stores within everyone's reach, many of whom are present. But don't be fooled by the brands: the clothing collections in Northern Europe are not always the same as in our home, on the contrary they can vary in range and quality, so it's worth taking a look around and avoiding discarding them a priori! There are really many, one after the other, in the main streets and also in the cobbled streets, up to the point where the shops give way to bars, cafes, breweries, ethnic restaurants, take away, fast food and so on. it has more. Here you can take a break in front of a mug of beer and a snack, or stop for a meal: you are spoiled for choice!

The shopping tour in the Altstadt would then turn into a historical-cultural tour if passing through Markt Platz you stopped to observe the magnificent Town hall (the municipal building) in typical low-Rhine style and you continued towards the river Reno for a relaxing stop or for a walk in the park of the same name, perhaps as far as the old port, now skilfully restored, modernized and intended for the service sector.

The second, also for the most part pedestrianized, boasts the important presence of luxury shops, the best known brands on the catwalks all over the world.

Berlin Wall, 20 years after the fall

Hotel Otto in Berlin in Charlottenburg: breakfast for champions

Lindau am Bodensee, what to see on Lake Constance

Hiking: in Germany sleep for free in mountain huts

Bavaria in 7 days and 5 stages

add a comment of Dusseldorf: Altstadt and modern Kö