Discovering Salento: Otranto, the beaches and the small villages

Il Salento it has had an incredible boom in popularity over the last 15 years and has become one of the most popular destinations for Italians for summer holidays. I have had the opportunity to go there several times in the last 4/5 years in different periods (from February to September) and this article wants to be a sort of "summary" of my travels in this magnificent Apulian territory. Salento is a borderland embraced by two seas (the Adriatic and the Ionian), with kilometers of dream beaches and secret coves overlooking the sea. But the real wealth of Salento in my opinion are its cities and small villages that preserve a historical and artistic heritage of inestimable value. In addition to the famous masterpieces of the Apulian Baroque (such as those of Lecce for example), there is a more hidden Salento made up of ancient residences, underground monuments, early Christian churches, underground caves and oil mills, dolmens and menhirs that make it the largest megalithic garden in Europe. Unwilling and unable to write a treaty, in this article I will focus on the Otranto area.

When to go to Salento

If, on the one hand, mass tourism has been good for the economy of Puglia, on the other it has ruined not a little the territory and its fame. Going to Salento in August has become synonymous with endless queues to get around (the road network leaves something to be desired), super crowded beaches, parties of 5000 people, etc. etc. Out of season it's a whole other thing. If you can, choose March, April, May, June or September and you will find yourself in paradise. In May / June you can already go to the sea and you will have the magnificent beaches of Salento all to yourself. In addition to this there are also the prices to consider: in the low season the Salento is very cheap and you can give yourself much more by spending much less. 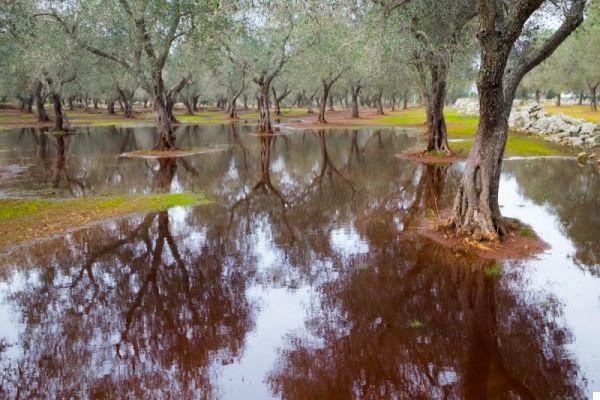 What to see in Salento

Otranto is a city of rare beauty! This fortified town in the Middle Ages was for 5 centuries one of the most important centers of the Byzantine domination. Then there were the Normans and the city became the crossroads of an intense commercial life given that the Crusader expeditions departed from its port and that the city was an important business center for Venetians, Jews, Dalmatians and Levantines. The Turks put an end to the period of maximum splendor in 1480; the city then later taken up by the Aragonese but declined more and more.

The oldest part of Otranto has lost little of its millennial charm, with white village enclosed by the Aragonese walls, the cobbled streets and the white houses. The historic center is accessed through the Alfonsina door and, following via d'Aragona first and the ascent of via Basilica then you arrive at the Romanesque Cathedral of the Annunciation, with the beautiful 16-spoke rose window and the mosaic of the tree of life. Do not miss the Aragonese Castle and the baby Byzantine basilica of St. Peter.

Then there is immediately outside Otranto one of the most photographed and instagrammed places in Salento: the bauxite quarry. In this now disused mining field, an emerald green lake has formed which makes the view nothing short of extraordinary. The perfect time to go would be sunrise, but it is also wonderful at sunset, when the red of the quarry is enhanced by the sun's rays. 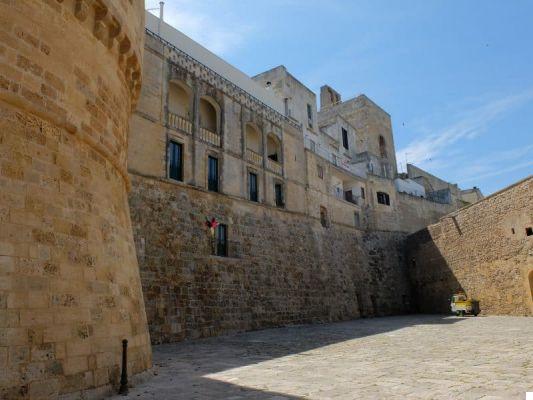 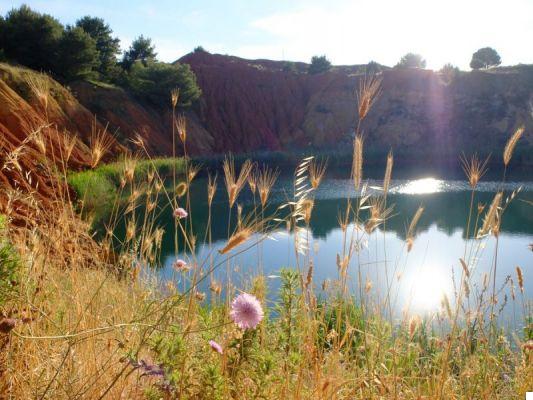 The beaches near Otranto

From Otranto it takes just a few minutes by car to reach some paradisiacal beaches. If you love sand head to Torre dell'Orso, Baia dei Turchi or Conca Specchiulla (all to the north); for those who love the rock, instead, there is the small bay of Living Water. If you are lazy and do not really want to move, you can always go to the city beach, or to the rocks below the village: the water is blue and transparent like in the other beaches outside the city. 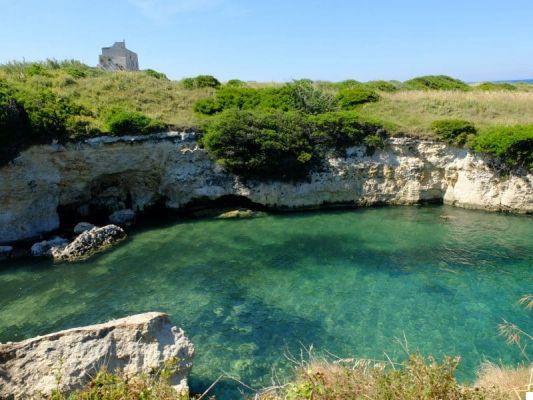 From Otranto, moving 6,5 km inland you get to Giurdignano, a very small agricultural center of great archaeological and historical interest. Together with the municipalities of Minervino and Uggiano the Church, Giurdignano represents the largest megalithic garden in Europe. In fact, here we find traces of the presence of man dating back to the Bronze Age, left by the Neolithic civilization that crossed these territories in 2000 BC Start the visit from the center of Giurdiniano and enter the Basilian crypt of S. Salvatore, a jewel of rock architecture datable between the XNUMXth and XNUMXth centuries and created by Italian-Greek monks. From there there are several marked trails to do on foot to reach, among other things, the hypoegeo crusher called 'trappidu de lu duca', built in 1518. There are several in the whole area, but this is one of the best preserved and it is a truly incredible place, I had never seen anything like it! Below 20 workers worked on the pressing of the olives in rotation; production never stopped and these men were segregated underground in semi-dark conditions (they could only go out on Sundays to go to mass!). All around the oil mill, within a radius of 2/3 km, are located dolmens, menhirs and specchie, megalithic monuments, some even several meters high. From Giurdignano it can then be reached Minervino of Lecce, to the north-east of which, in the direction of Uggiano la Chiesa, is the dolmen Excuse me, the largest and best preserved specimen of Salento: it is made up of 8 pillars and a covering table.

Other places not to be missed in the surrounding area are certainly there Idro Valley, With the underground crypt of Sant'Angelo and the village of poggiardo with the beautiful Mother Church. 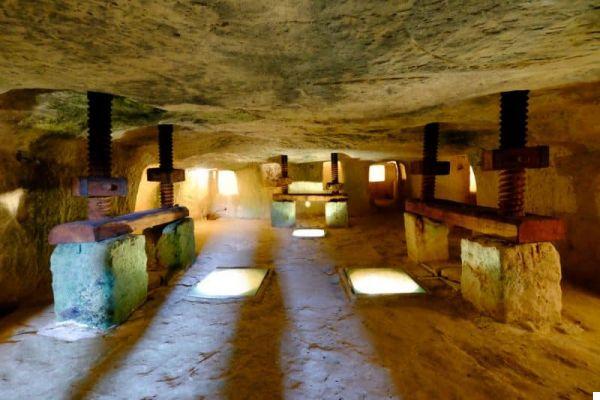 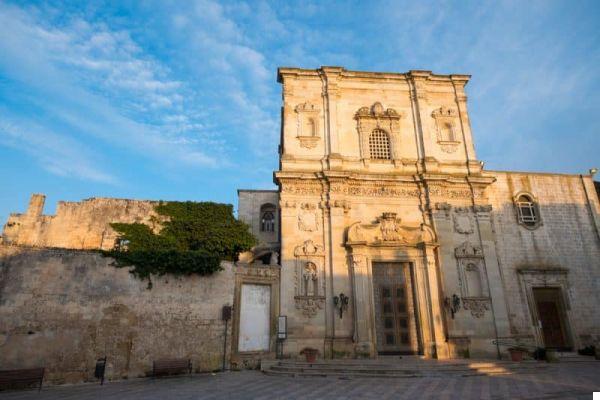 The stretch of coast between Otranto and Santa Maria di Leuca is truly beautiful. The road passes right above the cliffs and passes through particularly scenic spots. Starting from Otranto we proceed towards Weather in Punta Palascia indicating the easternmost end of Italy, the Capo d'Otranto. At this point the coast, high and rocky, is dotted with coves and ravines. One of these is Porto Badisco, a group of fishermen's houses near a fjord probably carved by an ancient river; it was the first landing of Aeneas in Italy, according to what Virgil sang in the Aeneid. Proceeding south you meet then Santa Cesarea Terme, a village characterized by pretty Moorish-style villas and mediterano (including the magnificent Villa Sticchi). Santa Cesarea owes its fortune to the four thermal springs of sulphurous waters and to some bathing establishments aimed at enhancing this stretch of coast (such as the Archi establishment, housed in an ancient stone quarry). Following is Castro and the nucleus of Castro Marina it opens onto one of the most beautiful inlets on the coast. Al yes above Castro Superiore then there are the castle and the Cathedral. The coast around Castro is also famous for 2 caves: the Romanelli cave, 15 meters wide, one of the most important prehistoric deposits in Italy, and the Zinzulusa cave, which takes its name from the numerous stalactites and stalagmites that appeared as hanging rags ('zinzuli') to the first fishermen who entered it. Before arriving in Santa Maria di Leuca, take a detour a few kilometers inland to visit Specchia. Its medieval village is considered one of the most beautiful in Italy! This small town, which overlooks a beautiful valley, has remained quite intact and retains the atmosphere of the past. The most suggestive part of the village is the one behind the Risolo castle, where the life of the people takes place between stairways, alleys and courtyards. Also worth seeing is the recently restored underground oil mill. I recommend that you go there in the evening and stop to eat in one of the many restaurants. From this point you will be almost there Santa Maria di Leuca, where you will breathe an air of other times, with his octagonal lighthouse from 1864 Basilica della Madonna, the eclectic villas on the sea in Moorish, Art Nouveau, Gothic and Arabic styles. Go by boat to discover the many caves between the two promontories of Punta Meliso and Punta Ristola, such as the Porcinara cave e that of the Devil.

For those who do not want to give up a dip in the water, the whole stretch of coast between Otranto and Santa Maria di Leuca is full of very small coves (from 20/30 people maximum) where you can stop for a swim. 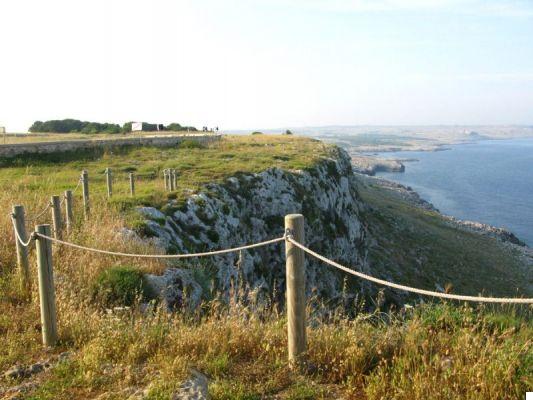 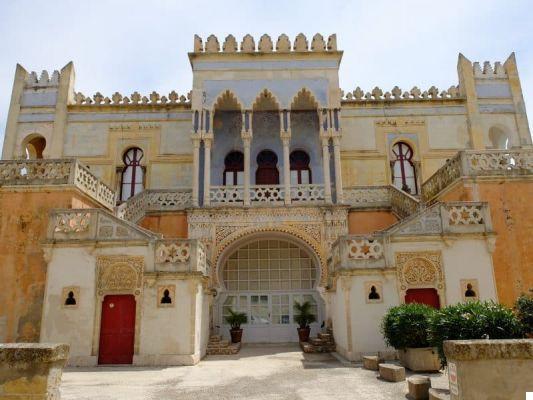 Where to eat in Otranto and surroundings 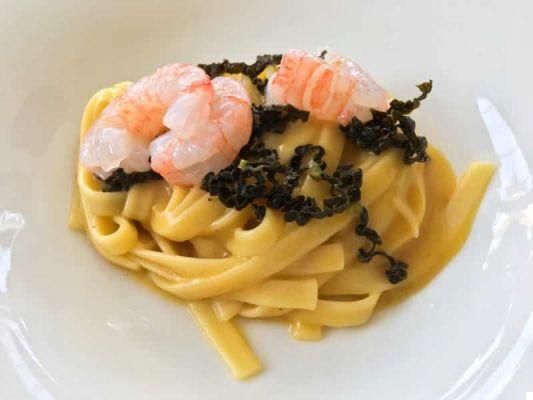 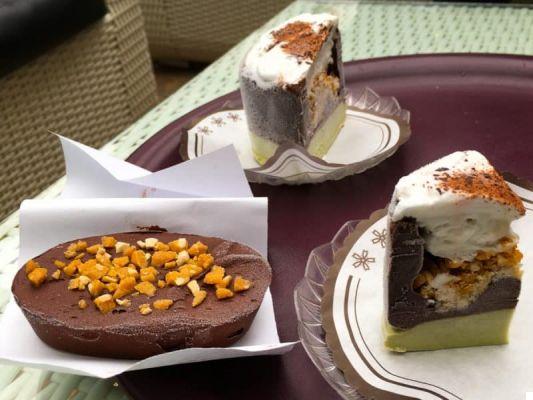 Where to sleep in Salento

-B&B Il Borgo (Poggiardo). This b & b is located in the ancient village of Poggiardo, a few km from Otranto and the beaches. The building has recently been renovated and the rooms have all the comforts. The breakfast is excellent and, on request, you can also have lunch / dinner. The large roof terrace is wonderful for relaxing or sunbathing.

- Masseria L'Uliveto (Otranto). A masseria immersed in a large olive grove on the outskirts of Otranto. You can sleep in the campsite or in the very nice bungalows scattered among the olive trees. It has a swimming pool and a restaurant where they also sell the organic products they produce there. A great place and out of season it is also cheap.

- The Scalelle (Otranto) A farmhouse 2km from Otranto, immersed in the fields. Here, too, you can both camp and sleep in bungalows or mini-apartments. Very similar to the olive grove, here too you can eat and buy their products. 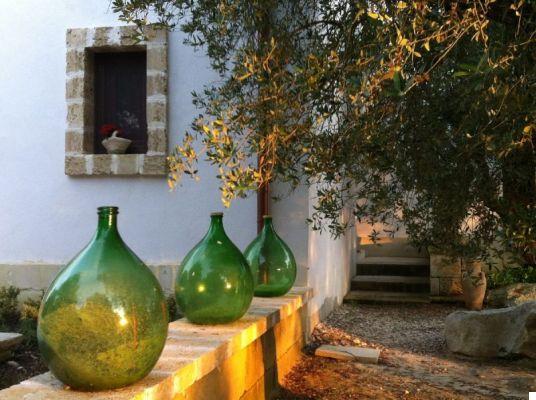 add a comment of Discovering Salento: Otranto, the beaches and the small villages