This area of ​​the country, crossed by the Tropic of Capricorn, bordering Chile, Bolivia and Paraguay, is a region with very high mountains that are part of the Andes mountain range. In stark contrast to the flat and humid North-East (where the Iguazu Falls are located), this area of ​​Argentina is characterized by extraordinary landscapes, made of snow-capped peaks, arid hills of a thousand colors, saline, plains covered with very tall cacti, geological phenomena with multicolored rocks, red earth deserts or fertile valleys with luxuriant vegetation. The region has a typically Andean atmosphere, with its traditional crafts, Quechua-speaking communities, coca farms and lamas; on these plateaus one really gets the impression of being thousands of kilometers from the capital Buenos Aires!

In Argentina our health coverage is not valid. My advice is to always take out medical-luggage insurance that can cover you during the trip. I am very happy with many insurance companies, a site that compares the policies of different companies and proposes the most convenient policy for that particular trip. To do this you will have to enter the data relating to your trip (country, duration, etc.) and they will send you an email with the best proposal that you can then buy directly online (!!!).


How to get around Argentina

All of South America has a really well developed bus network and, in my opinion, the bus remains the best way to get around and to visit like-a-local countries. There are buses of all classes, from basic, super cheap, to VIP. I tend to always use the medium-high range tourist buses, and I book i "semi-room" seats (with 45 ° reclining seat) oi "bed" (with 90 ° reclining seat, perfect for night journeys). In all tourist buses there is always a bathroom (even the bus makes several stops for the bathroom) and they always provide a snack and a drink; in “cama” trips a hot meal and various snacks + drinks are often included. Tickets can be purchased at bus stations; Unfortunately you can't buy them online because the sites require a Chilean, Argentine document, etc. depending on the company and a South American credit card. There are many bus companies, but just enter the route you are interested in on Google and you will easily find the website of the company you are interested in with all the timetables. Another site that I find very useful, especially in the planning phase, is the site of Rome2Rio, where there are all the options to get to a certain place.

In Argentina does not operate (at least for now) low-cost airlines , but the TAM and Aerolineas Agentinas cover the whole country. If you have little time available, you can consider making some flights by plane; if you buy your flights early you can find them at reasonable prices. 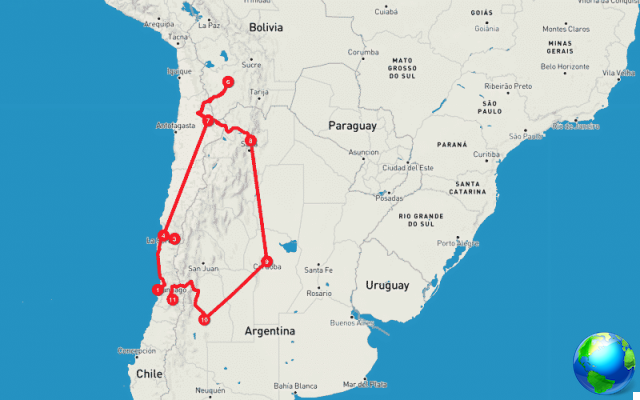 What to see in Northern Argentina:

Starting from San Pedro di Atacama, you go along the beautiful Routa 52, which climbs through the Reserva National Los Flamencos until you reach the border with Argentina which is located right on the Jama pass (4200 meters). If you are lucky, in 1 hour or so you will be able to complete the customs procedures, but it could also take much longer. After the pass, the road begins to descend, there are a thousand hairpin bends (often dirt roads), and the views are nothing short of spectacular! Of course, if you suffer from vertigo it is better if you don't sit in the front rows of the bus. At the end of the descent we arrive at a salt desert, called Salinas Grandes, which looks a lot like the Salar de Uyuni: it is so white that it blinds! At first glance it looks like a mirage, a white expanse as far as the eye can see. At the end of the salar the road climbs up to the Potrerillos pass (4170 m), before re-descending before reaching Purmamarca and crossing the Quebrada de Humahuaca, declared a UNESCO World Heritage Site for both biodiversity and history. Here there is in fact el cerro de los Sietes Colores (the mountain of 7 colors, which can also be seen when passing by bus), with iridescent shades of mauve, beige, green, pink and sienna. The journey from San Pedro de Atacama to Salta is long and tiring (if you don't find a queue at the border, it takes about 9h), but the landscapes you cross are worth a trip to Northern Argentina alone. 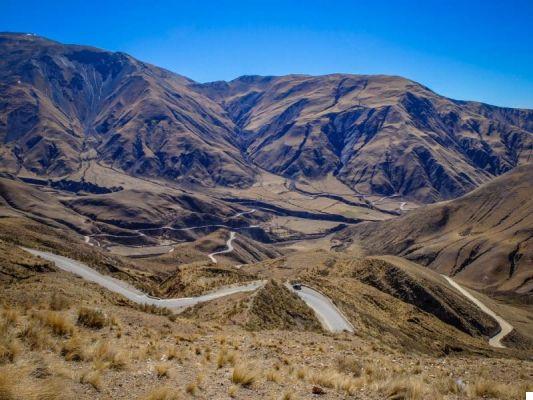 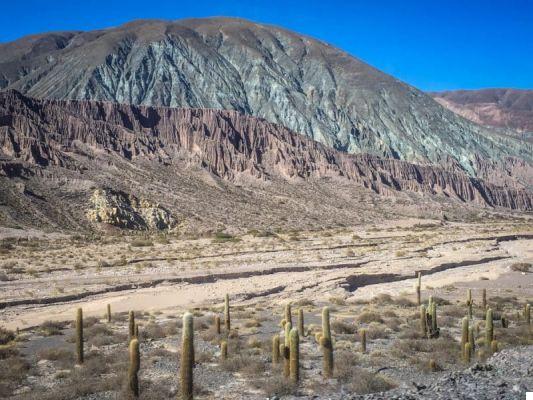 Skip “la linda” (the beautiful), the most beautiful colonial city in Argentina (although it is certainly not comparable to Cusco or the other Mexican colonial cities). There are many vestiges of its glorious past (it was founded in 1582 by the Spaniards), aristocratic palaces, churches, old convents, balconies carved in wood and highly decorated internal courtyards. It is a very lively city, both during the day and in the evening. Among the things to see can not miss:

Where to sleep in Salta

Coloria Hostel: this very colorful hostel has both double rooms with private bathroom (around € 15 per person / night) and dorms with shared bathroom. It's simple but nice and you can organize excursions to Quebrada de las Conchas and Valleys of Cochi directly with them. There is also a mini-pool and a mini-garden.

Where to eat in Salta 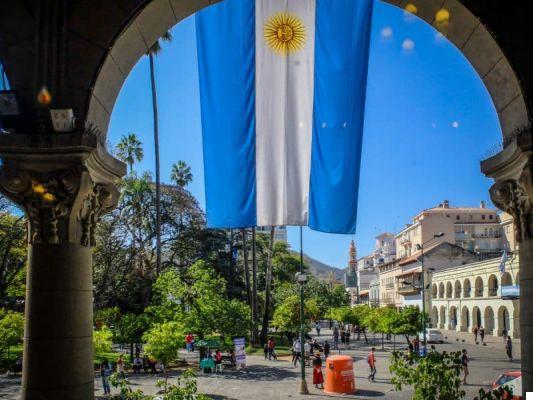 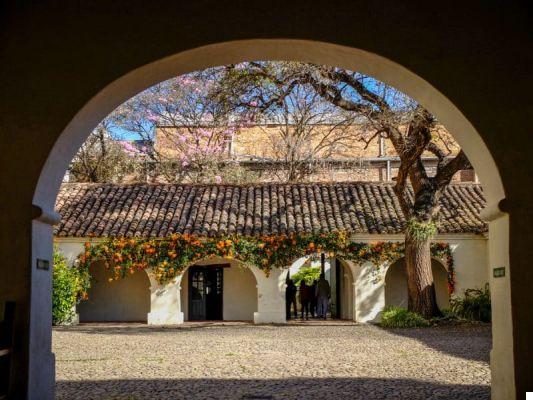 From Salta it can be done a day trip (for 30 euros) to the Quebrada de las Conchas and Cafayate which also includes a visit / tasting at a winery. In fact, in Cafayate, Torrontes is produced, the “highest” wine in the world. Two million years ago this area was completely covered by the Ocean until the Andes emerged creating this new landscape (hence the name las conchas, shells). Once the sea disappeared, the seabed sculpted by the currents appeared, revealing very strange formations that can be discovered today along an asphalted road that follows the course of the Rio las Conchas. Many stops are made to see these incredible natural formations: there is The amphitheater Devil's throat, The mushroom (the mushroom), The obelisk and many others. Also very beautiful is the highest vantage point of the route at the height of Three crosses (3 crosses), at 1800 meters. It is a very nice excursion that I recommend you do (as well as the one to the Calcahqui valleys). 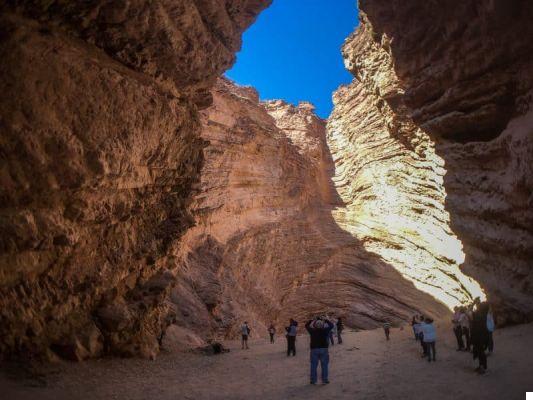 Always from Salta e also during the day (for 30 euros) you can take another excursion to the Calchaqui Valleys, which runs along the fabulous (and impervious) dirt road that leads from Salta to Cafayate passing through the remote villages of Cachi, Molinos and Angastaco. Starting from Salta, the road crosses the broken of scoop and then go up along The Enchanted Valley up to the highest pass of the route, the pass of Mulino stone, at 3348 meters, marked by a small chapel on the roadside. Going down, the road widens a little and the landscape changes completely to make room for an immense plateau, dry and arid, characterized by thousands of very tall cacti in the heart of the Los Cardones National Park (the name of this type of cactus). After about 20 km you cross the famous Routa 40 before arriving in Cachi. The latter is a beautiful village at 2280 meters which has preserved its authentic colonial aspect thanks to its isolation. During this excursion it is possible to see both guanacos and condors. 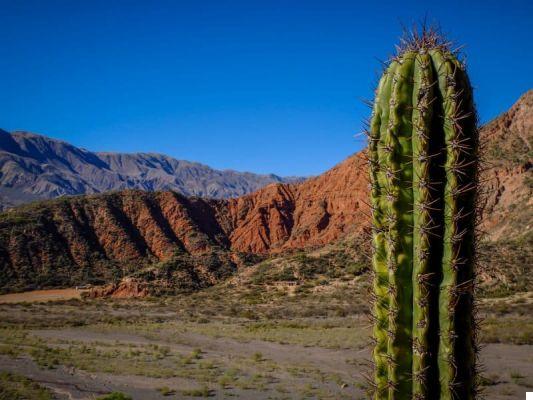 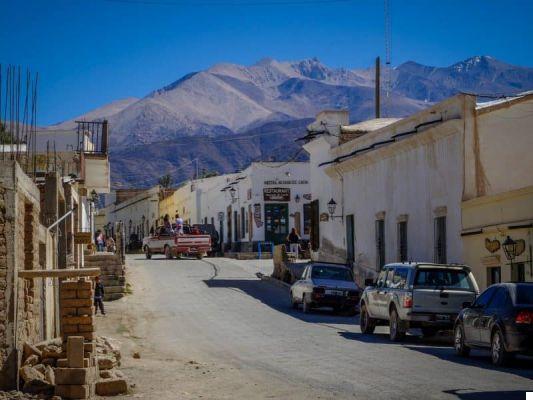 Second city of the country, Cordoba also known as "the learned", is the perennial rival of Buenos Aires. Founded in 1500, Ignazio da Loyola (the founder of the Jesuits) settled there, creating a city of considerable size. Later this "Jesuit capital" played a fundamental role during the war of independence against the Spaniards. Cordoba is now an important industrial and commercial hub, but also a tourist and student hub (its universities are among the most famous in Argentina). Among the things not to be missed:

Hostal Turning Point : a simple hostel near the center of Cordoba, very convenient to reach the Jesuit Manzana and other attractions on foot. It has both doubles with private bathroom (30 € per room) and dorms with shared bathroom.

Where to eat in Cordoba 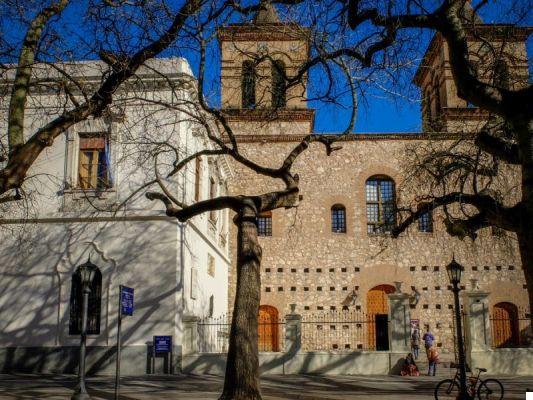 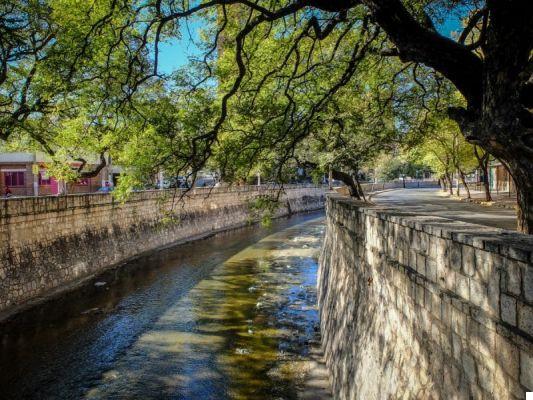 High grace it is located just 40 km from Cordoba and can be easily reached by minibus (they leave every 20 'from Cordoba and take about 1 hour). In the 20s and 30s Gracia became the holiday resort of the bourgeoisie of Cordoba and Buenos Aires and is famous for its Jesuit Estancia (a kind of farm used by the Jesuits to finance the university) and for the Che Guevara's childhood home. Both are worth seeing! In Che's childhood home there are many objects, photographs and letters from which one can guess the character of the revolutionary future… very exciting. (there is also a copy of La Poderosa!).

In case you don't want to go alone you can book this Half day tour to Alta Gracia which includes both the Che's house and the Jesuit Estancia. 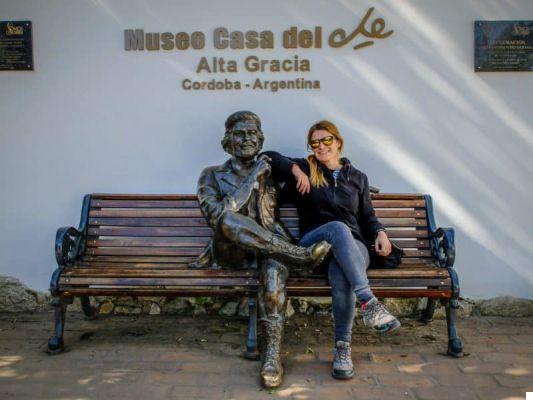 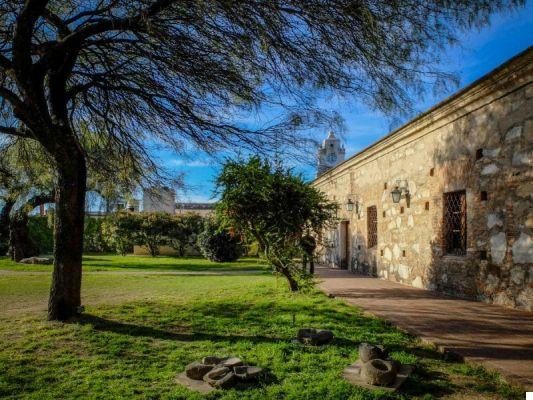 Mendoza and the wine route

Mendoza is the 4th city of Argentina and is located at the intersection of 2 super-famous roads: the Routa 40 and the Routa 7 which connects Buenos Aires to Chile. Unfortunately the earthquakes have spared only a few colonial vestiges so it is certainly a beautiful city, but not as authentic as Salta or Cordoba, even though it is the capital of wine (65% of Argentine wine is produced here!). It is a middle-class city, with nice shops, buildings, streets and clubs, but personally it hasn't conveyed much to me. To see there are:

Where sleeping in Mendoza

Confluencia Hostel : a small hotel near the center with a beautiful terrace perfect for an aperitif at sunset. A double room with private bathroom costs around € 35.

Where to eat in Mendoza

The bar : restaurant specializing in grilled meat (exceptional!). The atmosphere is warm and nice (it feels like being in a bay) and the food is really good. It costs a little more than the average (about € 25 per person), I'm worth it. 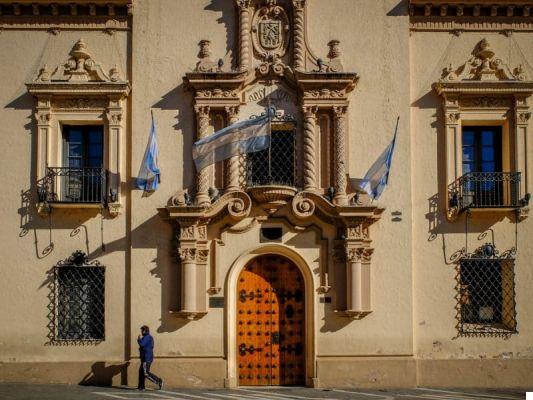 Aconcagua and the Andes road

La Routa 7 that connects Mendoza to Santiago de Chile is one of those mythical roads that invite exploration. This road climbs the Andes in its highest part and allows you to see breathtaking views and above all her, the queen of the Andes, l’Aconcagua (6962 mt), the highest peak on the American continent. I traveled it with a bus and therefore I could not stop you at different points as it deserves, even if I still managed to see the peak of Aconcagua. If you do it independently, surely the Inca bridge worth a stop. It is a perched village that holds an amazing site: a natural arch covered with yellowish concretions. Then there are several ski resorts on both the Argentine and the Chilean side: you can also consider going for a ski! 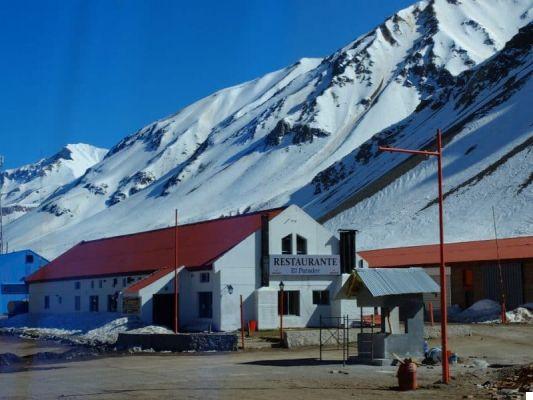 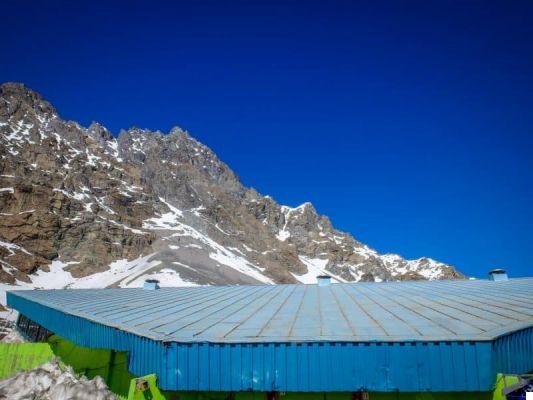 Travel insurance: which one to choose and how it works ❯

Chilean Patagonia and Southern Chile: the Lakes Region, the island of Chiloé and Torres del Paine

How to organize a trip to Patagonia and Tierra del Fuego

Argentina, five places not to be missed

Perito Moreno: how to organize the visit

What to see in Buenos Aires in 3 days

add a comment of Northern Argentina: Salta, Cordoba and Mendoza