What to see in Merano in winter

Can I say that I was particularly impressed by this small town in South Tyrol and its surroundings? Well yes, definitely yes.

Merano it is located 30 kilometers from Bolzano (300 from Milan), at the intersection of 3 valleys and two rivers, the Adige and the Passirio, and has a great tradition of tourism. Its success blossomed in the nineteenth century when its favorable climatic and geographical conditions were discovered by the aristocracy of half of Europe, including the empress of Austria, the famous Princess Sissi. Among the many illustrious guests of the time they are also remembered Franz Kafka and Ezra Poud. Above all, the many Art Nouveau buildings overlooking the river, some castles and the walks along the Passirio still remain from this glorious past. Today Merano is a tourist town for 12 months a year with a very varied offer ranging from thermal treatments in the new thermal baths inaugurated in 2005, to walks, mountaineering, museums, winter sports such as skiing, snowboarding or sledding, Christmas markets and much more.

What to see in Merano and surroundings

The historic center of Merano is located on the north bank of the Passirio River and can be visited entirely on foot. Start from Puccini Theater (in liberty style), then take Via Portici which, as the name suggests, is a narrow arcaded street with classic Tyrolean houses in pastel colors, up to the Cathedral of San Nicolò in gothic style. From there go back along the river from Via Roma to see the beautiful Kurhaus (Nursing Home), one of the most prestigious buildings in Europe. Designed in 1873, it was inaugurated the following year; inside there are 13 rooms that can accommodate up to 1000 people. Continue along the Winter Walk until Roman bridge, the oldest bridge in Merano, which dates back to 1617. Continuing along the river you will finally arrive at some panoramic points that open onto a small gorge of the Passirio river.

Merano is famous for its walks, most of which were "designed" in the mid-nineteenth century. One of the most beautiful and panoramic is certainly the Tappeiner walk; created and donated to the city by Dr. Tappeiner, the route is located immediately above the historic center and extends for about 7 km among examples of typical local vegetation and Mediterranean plants. This walk offers magnificent views over the city and can be accessed from different points (behind the Duomo, from the Prince's Castle, etc.). Then there are the Walks in Winter and Summer which wind along the two banks of the Passirio river; the first is very sunny and protected from the wind (perfect for the winter in fact) and the other is its opposite twin and enjoys a rich vegetation. There Gilf Walk it crosses both sides of the river and is a romantic walk thanks to its poetic path: verses by modern authors and contemporary poets are engraved in all the benches of the itinerary. Finally, for lovers of Princess Sissi and the atmospheres of that era there is the Sissi path which leads between the places of the Empress of Austria in Merano. The route winds for 3 km between the city center and Trauttmansdorff Castle (closed in winter) between castles and elegant late XNUMXth century residences. 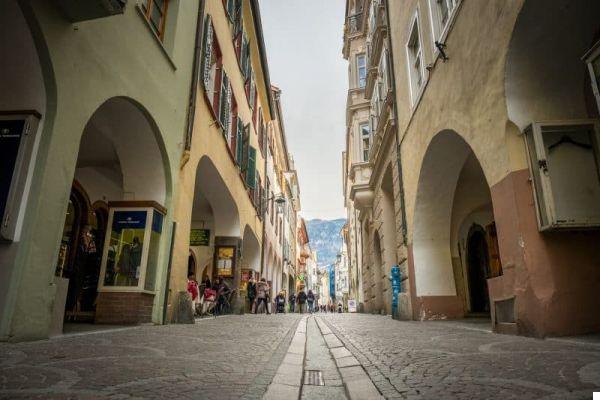 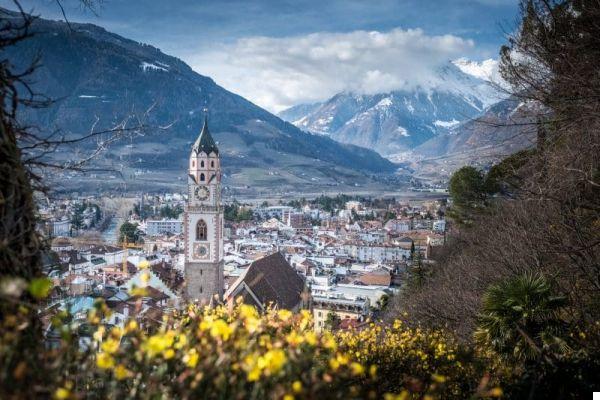 In this very interesting museum 200 years of cultural and material history from the point of view of women are documented: the roles of women through clothes, accessories, tools of everyday life, books and documents. The latter tell details of the various social roles played by women and represent a unique collection on women's history in Europe. The museum is very active and, in addition to the permanent exhibition, there are always temporary exhibitions dedicated to female themes. The Museum is also part of the International Association of Women’s Museums (there are 80 Women's Museums all over the world!). Absolutely recommended.

Merano has been known as a spa resort since the early 1900s and in 2005 they were inaugurated the new Merano Thermal Baths right in the heart of the city. The structure resembles a large glass cube immersed in a huge park of 50000 square meters. In the Baths there are 13 indoor pools (2 of which with thermal water) and 12 outdoor pools, Finnish saunas, a South Tyrolean organic hay sauna, a steam bath with organic herbs and a snow room. Well-being continues to Spa & Vital center where you can do wellness treatments of all kinds (including bath for 2 with milk and honey) and in the Fitness center. The Baths are very well organized and offer many types of tickets (hourly, day, morning, evening, cumulative spa + ski tickets, family tickets). I must admit that 2 hours at the spa are enough to get you back into the world after a day of skiing or strenuous walks in the snow. PS if you are going to take a sauna, remember that you have to enter as mom made you! Alto Adige rulez (another rule .. no photo inside the spa!). Prices starting from 13 euros for 2h; open from 9h to 22h. 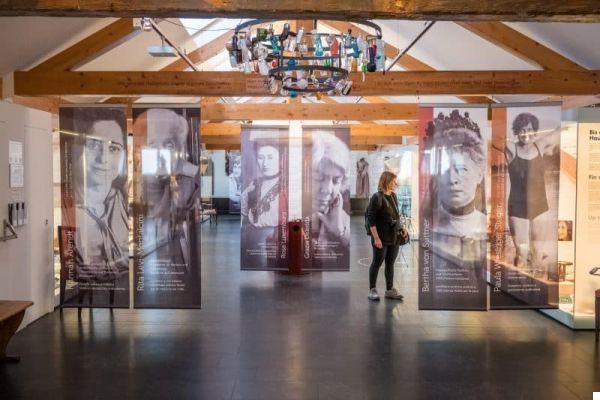 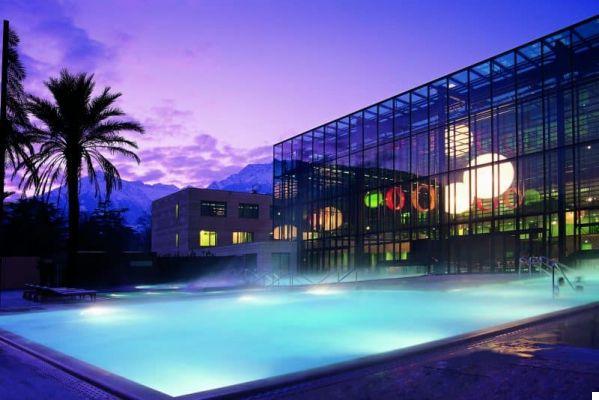 Castle Tyrol  it is located a few kilometers outside Merano and is the manor from which the counts of Tyrol originated and the cradle of the territory that took its name from them. Today the castle houses the historical-cultural museum of the province of Bolzano and traces the eventful events of Tyrol to the present day. Immediately outside the castle there is also the Avifauna Recovery Center which, after careful training, reintroduces injured and defenseless birds of prey into the natural environment. Flight demonstrations with various birds of prey are held twice a day; there are also 24 aviaries with 50 birds of various species. . The Museum and the Center are open to the public from March 15 until early December each year, but it is still worth going to see it from the outside.

The plateau of Monte San Vigilio (1900 mt) it can be reached on foot or by cable car from Lana. This cable car was inaugurated on September 1, 1912 and was one of the first funiculars in the world to transport people. In the 30s, the healing springs of Monte San Vigilio were discovered which, since then, have fed the Merano Thermal Baths. On Monte San Vigilio there is a small ski area (5 km of slopes), but above all many scenic trails to do with snowshoes and a toboggan run. 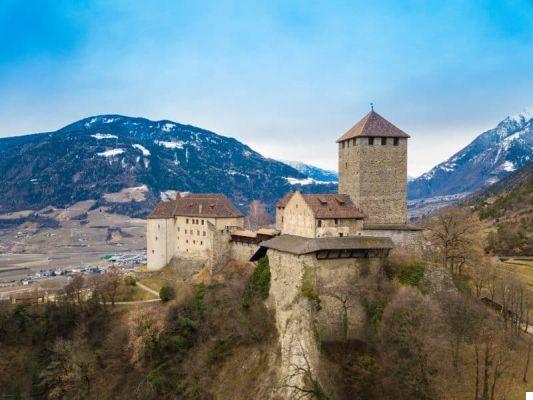 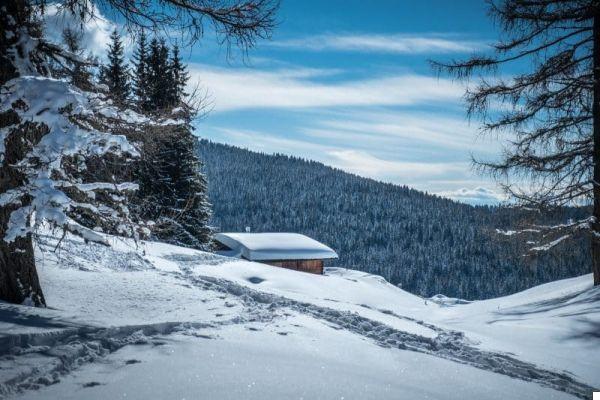 The small village of Hafling it is located 10 km from Merano at an altitude between 1250 and 1600 meters and can be reached via a magnificent panoramic road. Going up along the latter, one of the first detours you meet is the one to reach the little church of Santa Caterina, a tiny church located in a small saddle at the foot of the Tschoggleberg mountain. The church is a small jewel and from here you can enjoy a magnificent view over the whole valley. For an even better view, go up a few meters from the church and go for a drink or eat on the terrace of the beautiful Hotel Miramonti. Going up a few more kilometers you will find another deviation that leads to the base of the path that reaches the "Knottnkino”(Or Natural Cinema on the Sasso Rosso). This is one of the most evocative viewpoints in the area and can be reached in 45 '(if there is a lot of snow and the path has not been beaten it is recommended to have snowshoes or snow shoes). When you arrive, about thirty cinema-style chairs invite you to relax and let your gaze wander over the Val d'Adige, the Tesa Group and even up to the Corno Bianco. 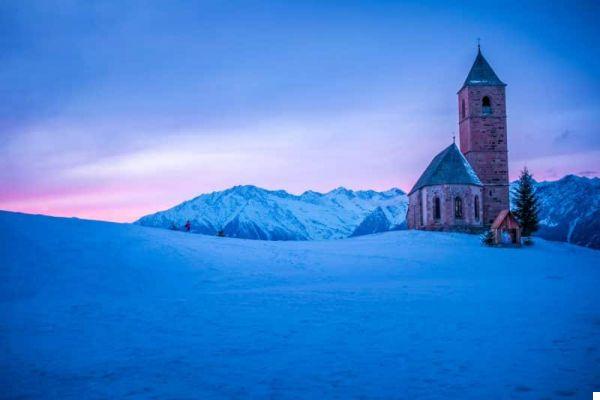 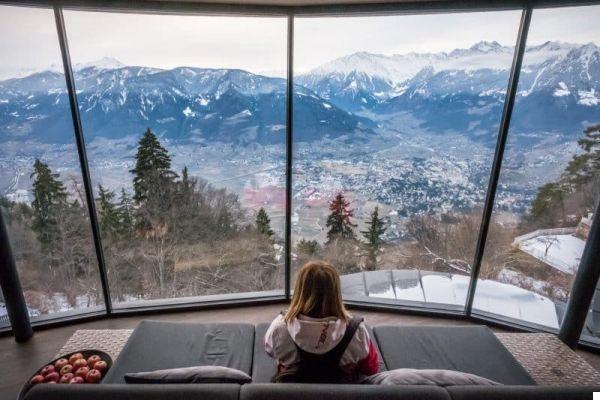 Climbing further above Avelengo you can reach it Merano 2000, the paradise for winter sports. In reality, Merano 2000 can be reached both with the Merano 2000 cable car in Val di Nova in Merano and with the Falzeben cable car in Avelengo. In addition to the ski area (40 km of slopes), Merano 2000 is famous for walks / snowshoeing and excursions on the snow of various difficulties, sled descents (also by rail with the new Alpin Bob), breathtaking views and mountain huts. and shelters where you can make tasty stops. We have opted for one beautiful snowshoe hike that took us from Falzeben to the Malga Meraner, and then back down to Falzeben along the slopes. For snowshoeing, as well as off-piste skiing or snowboarding, you must always rely on the expert alpine guides of the area; never go alone !! We went up with Robert and Birgit from Meran Alpin and we had a great time; they have been professional mountain guides for many years, they are super experienced and made us live a truly magical experience (they also provide the equipment if you want). 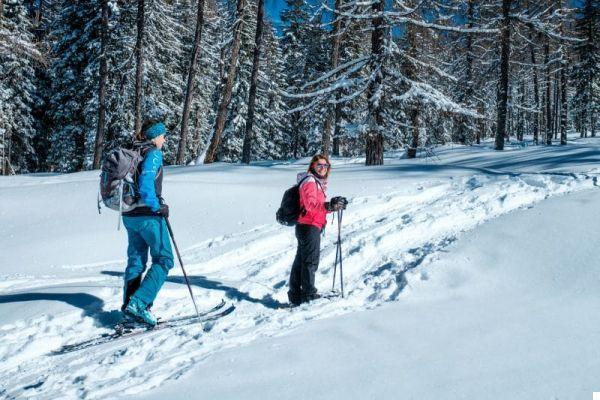 If you feel like going a little further, take the SS38 which goes towards the Stelvio Pass (border with Switzerland) and the Resia Step (border with Austria). You will cross the Val Venosta which is full of really interesting villages and castles. Starting from Merano, the first point of interest is Castel Juval, the summer residence of the Messner family and houses one of the Messner Mountain Museums. Juval Castle is dedicated to the sacred mountains and houses various art collections (it can be visited in spring and autumn). After a few kilometers it can be reached Castelbello with the beautiful castle of the same name that rises majestically on the mighty fortress at the western entrance of the town. Continuing towards the Resia Pass, the town of Glorenza, one of the smallest towns in the Alps and a true architectural gem that has remained intact since the 16th century. Next you pass through the town of Mals and the white one Marienberg abbey before reaching the Resia Lake from which stands the bell tower of the old church. I had seen this place in many photos but seeing it live made me much more effective. It is a surreal place caused by the dam built downstream in the 50s which completely submerged the town of Graun saving only the bell tower that magically appears from the frozen lake. Lake Resia is always windy in winter and is much loved by those who practice snowkiting. 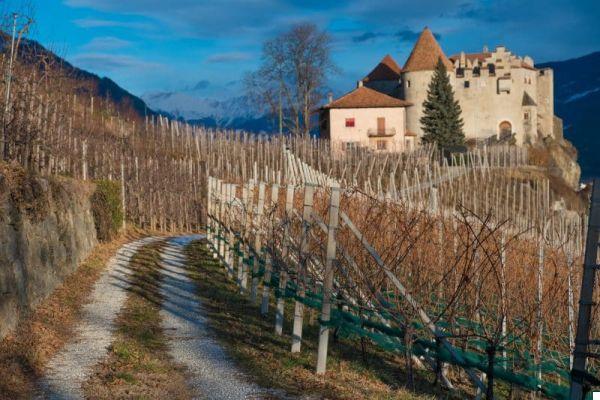 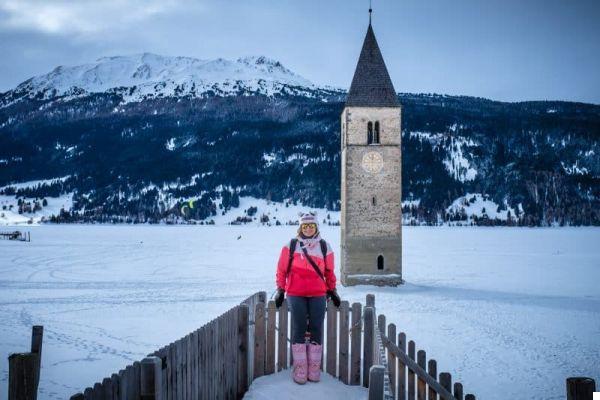 Where to sleep in Merano

Hotel Westend. The Hotel Westend is located along the promenade on the Passirio river in a beautiful 1890 liberty building, a few steps from the historic center and the train station. Upon entering you are catapulted into the magical atmosphere of the late 800th century, with period furniture and finely decorated interiors in art nouveau style. The rooms are very large and spacious and do not lack all modern comforts. One thing that, as a “Milanese”, I really appreciated is the roar of the river, the only soundtrack when you fall asleep and wake up, truly priceless. The owner and manager Alexander Strohmer is of rare kindness and can provide all the information on Merano and its surroundings (you can also buy the ski pass for Merano 2000 and the entrance to the Terme Merano from him). Another gem ... breakfast. There is everything, a wide choice of desserts, eggs, ham, cheese, fresh and dried fruit, yoghurt and cereals. The hotel also has an internal parking (essential in Merano), a restaurant (open from spring to autumn) and a beautiful garden. 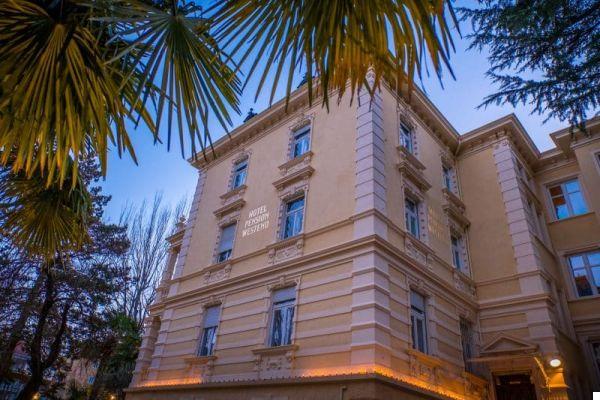 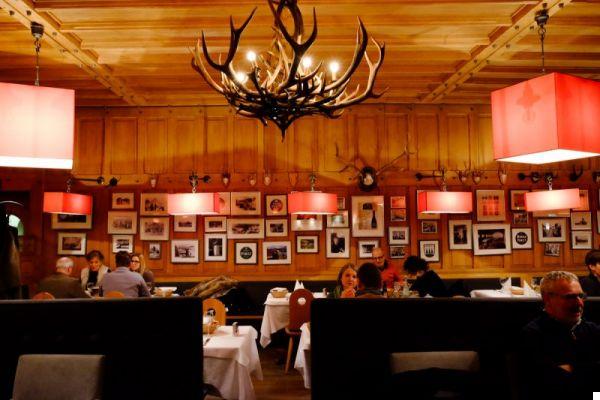 And here is the video of this magnificent experience!

This article was written in collaboration with the Westend Hotel.

What to see in Miami ❯

add a comment of What to see in Merano in winter