In Santa Maria Capua Vetere, the amphitheater that inspired the Colosseum 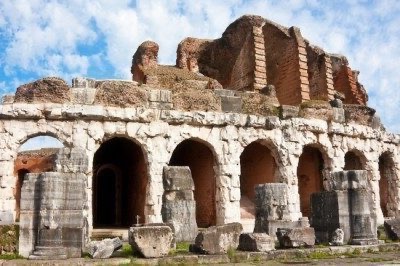 I like the suburbs and I think they have to offer as much and perhaps more as the much more popular and much better known large historical or tourist centers. Santa Maria Capua Vetere it is not really a suburb, it is a fairly large town located a few kilometers away from Caserta.

Everyone knows the famous Vanvitellian Palace of Caserta, many of you have probably already been there and many plan to go there in life, sooner or later. But Caserta is not just the Royal Palace, and his province has treasures of all kinds just waiting to be re-evaluated. L'Campanian amphitheater of Santa Maria Capua Vetere is, as dimensions, second only to the Colosseum. It is probably considered the first Roman amphitheater to see the light, being dated between the end of the XNUMXst and the beginning of the XNUMXnd century AD and, almost certainly, it is from this model that the Colosseum was inspired.

It was inaugurated in 155 AD by Antonino Pio, the Vandals first and the Saracens then, destroyed it, but it was always rebuilt and, finally, used as a fortress by the Longobard princes of Capua. Like all Roman amphitheaters, it has an elliptical plan. In the period of the Swabian domination, unfortunately, it became a quarry for the extraction of stone materials. Only in the decade 1920-1930 was it freed from the masses of earth, subjected to numerous restoration works and brought back to life.

add a comment of In Santa Maria Capua Vetere, the amphitheater that inspired the Colosseum