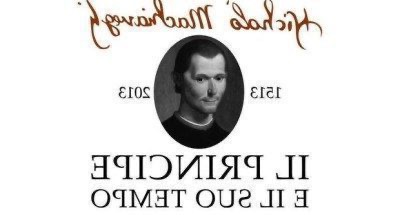 We are not here to play politics. We like to talk about travel, about art of culture. And of this, only of this, I intend to speak to you. Well, I inform you that, starting from April 25th to June 16th 2013, Rome and the Vittoriano complex, probably better known as the Altare della Patria, located in Piazza Venezia, will host the exhibition "The Prince of Niccolò Machiavelli and his time. 1513-2013”Dedicated to the XNUMXth anniversary of the writing of“ The Prince ”, which is not only the most important work of the aforementioned Machiavelli, but also a very important point of reference for our Italian and European culture.

The exhibition boasts among its promoters, in addition to the High Patronage of the President of the Italian Republic, the Ministry for Cultural Heritage and Activities, in Roma Capitale, the Chamber of Commerce of Rome and the Aspen Institute Italia, boasts, I said, also the promotion by the Institute of the Italian Encyclopedia founded by Giovanni Treccani and currently chaired by Prof. Giuliano Amato.

It will be up to Amato, former Prime Minister and most favorite to the post of future premier, inaugurate, Wednesday 24 April 2013 at 18:00 this review which, starting from the Classics which the Machiavellian formation drew on, reaches the drafting of Il Principe and, passing through the influences on our time, ends in the section dedicated to abuse and exploitation to which the text has lent itself.

Rome, art and culture await you for what is called a very high profile exhibition.

Audio Video At the Vittoriano, in Rome, an exhibition on Machiavelli's "The Prince"
Golden Coast Flic-en-Flac, Mauritius ❯

add a comment of At the Vittoriano, in Rome, an exhibition on Machiavelli's "The Prince"