The United States: the US Regions and States

Author and references
The United States: the US Regions and States

The United States is made up of 50 states, various overseas territories, plus the city of Washington DC, a federal district that is the nation's capital. It is one of the largest countries in the world with an area of ​​almost 10 million km², more than 30 times the size of Spain.

Seeing the whole country in one trip is impossible. Many of the trips include a few cities and at most a few states. If you want to visit multiple regions on a trip or vacation to America, it is advisable to plan your destinations well, and especially to have a lot of time in the US.

Politically, the United States they are a federation of states, each with its own rights and powers (hence the name). The United States manages various non-state territories around the world, the largest of which is Puerto Rico (which has the special status of "republic"). But also the US Virgin Islands in the Caribbean, plus the islands of Samoa, Guam and Isole Marianne Settentrionali in Oceania (also with the special status of "republic").

US states and regions

New England offers beaches, spectacular corners of the sea, rugged mountains, frequent winter snows, and some of the oldest cities in the country, all in a territory small enough to visit.

Hurriedly it takes about a week to visit the whole region. The environments of the small towns have managed to maintain a large degree of autonomy over the various centuries.

The Mid-Atlantic includes the states Delaware, Maryland, New Jersey, New York, Pennsylvania e Washington DC. The region is home to some of the nation's most densely populated cities, historic sites, and majestic mountains.

In addition to the New Jersey Pine Barrens, the Lehigh Valley and the beaches of the seaside resorts of Long Island and Jersey Shore. The Mid-Atlantic includes some of the most cosmopolitan areas in the world, but also small areas where the enclaves of American history are still present.

La Florida called the Sunshine State for its good and mild climate all year round, it is one of the main tourist destinations in the country. Among the main destinations: Orlando, full of amusement parks and attractions; Miami and Miami Beach, the seaside resorts par excellence of the States, influenced by the mild tropical climate of the Caribbean; and the Everglades with 1.200 miles of sandy beaches. It is located in the Caribbean area, the starting point for trips to exotic islands.

The Great Lakes form the largest freshwater lake system in the world, they form a sort of northern coast of the United States. The people of the Midwest are known for their simplicity and hospitality.

Il Texas it's the second largest state in the nation, it's like a country in its own right (in fact it once was). It has strong cultural influences from its Spanish and Mexican past. The state is also a nexus of the South and Southern cultures. The terrain varies from southeastern swamps, south Texas ranches and sandy beaches, to West Texas mountains and deserts.

The Great Plains includes states North Dakota, South Dakota, Nebraska, Kansas e Oklahoma. They are often a destination for trips to the west, offering unique landscapes. These seemingly flat states have huge forests on the eastern edge and huge expanses of steppes (grass meadows) above the High Plains.

The Rocky Mountains encompasses states Colorado, Idaho, Montana e Wyoming. The spectacular and often snow-capped Rocky Mountains offer hiking, white water rafting and excellent ski and snow-loving locations, as well as deserts, and some major cities. The most beautiful tourist cities welcome hundreds of miles of tourists a year, while some areas of the Rocky Mountains are virtually untouched by man.

The Southwest includes the states ofArizona, New Mexico, Nevada e Utah. The region is heavily influenced by Spanish and Mexican culture. There are some of the nation's most spectacular natural attractions in the area.

Though mostly empty, the region's deserts have some of the largest cities in the nation. Additionally, a strong Native American influence can be felt throughout this region including the nation's large reserves.

California offers world-class cities, deserts, rainforests, snow-capped mountains, and beautiful beaches. The state can be divided by culture in Northern California where the big city of San Francisco and Southern California is more touristy with Los Angeles, San Diego and numerous amusement parks.

The Pacific Northwest comprises the states of Washington and Oregon. The region offers outdoor activities and cosmopolitan cities. The terrain ranges from spectacular rainforests to scenic mountains, volcanoes, beautiful coasts, steppes and deserts. In just a few minutes, you can travel from an ultra-modern metropolis to dense forests and mountains.

THEAlaska it is the largest American state, it has an area as large as one fifth of the United States. Alaska reaches much of the Arctic and its territory also includes a mountainous desert. The state has a rich and varied tapestry of indigenous cultures, including Yupik, Inupiat, Tlingit and others. About 15% of the inhabitants are of native origin.

Le Hawaii are a volcanic archipelago in the tropical Pacific, 2.300 miles southwest of California (the closest state). These volcanic islands are a holiday and beach lover's paradise. The indigenous Polynesian population is known for being welcoming and fun-loving. 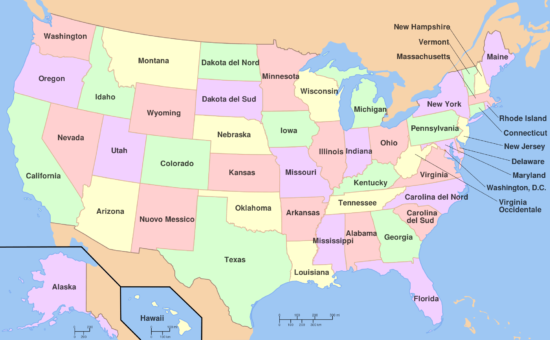 Map of the 50 states of the United States of America -
Go Card Los Angeles: The best card for Los Angeles attractions and tours ❯

add a comment of The United States: the US Regions and States