Rhodes Island: a week with children

The perfect island for a family-friendly holiday: comfortable and wide beaches, accommodations with swimming pools, great food and many fascinating places to visit in the late afternoon or evening. Between legends to tell and history, your children will really like Rhodes.

THERhodes island it was my first trip to Greece and for me a very pleasant discovery. I chose it because, with a 9-month-old girl, it gave me the idea of ​​being afamily friendly island and so it turned out. 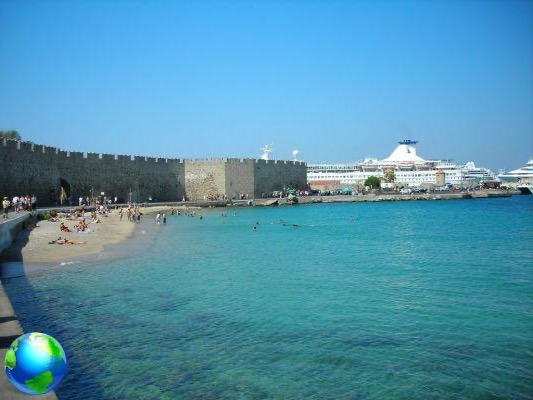 The island of Rhodes

Rhodes, or Rhodos as it is called in the local language, it is the most impressive island of the Dodecanese, as well as the easternmost of the Aegean islands.
It is only about 17 km from the coasts of Turkey, which you can clearly see with the naked eye. Famous for her Colossus of Rhodes, statue of the god Elio, considered one of the seven wonders of the ancient world.
Unfortunately the statue has never reached the present day but remained standing for about sixty years in the third century BC.

The myth tells that Rhodes was born from the love of the god Elio, god of the Sun, for the nymph Rodo, daughter of Poseidon, god of the sea. Hence the veneration of this earth for the god of the Sun which led to the creation of the Colossus.

But if Rhodes and its almost mythological Colossus are known to all, its incredible is perhaps less known medieval town.
This part of the city is now a World Heritage Site, and its ancient ruins occupied by the Knights of St John during the Crusades.

My daughter was too young but these and many other stories and legends will fascinate your older children.

THEIsland of the Sun, so called because the sun seems to shine there for 300 days a year, it is famous for its enchanting seaside resorts. 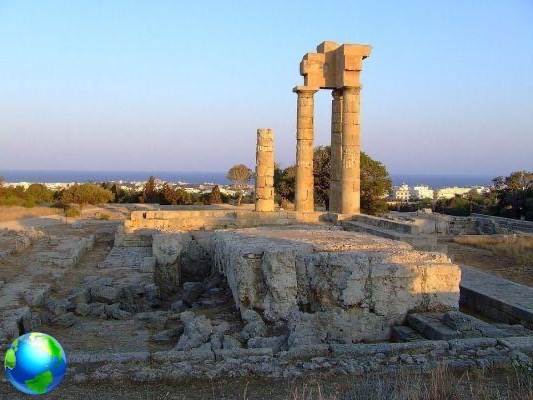 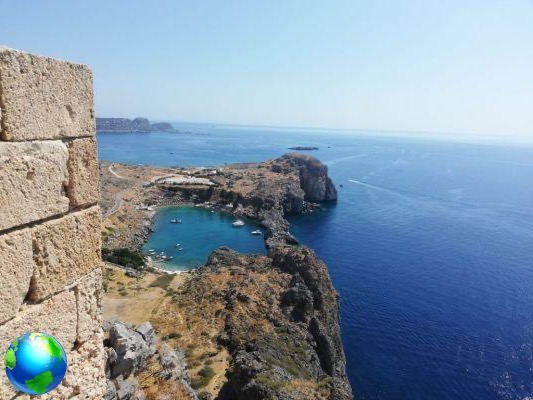 We traveled in August and for me, if a place is beautiful in August, despite mass tourism, that place is always beautiful. It was the first holiday abroad (I do not count those I took while I was pregnant with her) of our child and also of the little older child of the friends who came with us.

If you are two couples with children and you want to enjoy Rhodes - but with all possible comforts - surely a great idea is to rent a house / villa on Airbnb near a nice beach.


A villa in Afandou Beach

We rented this truly wonderful villa with a swimming pool Afandou, about 150 meters from the sea.
Afandou Beach is a very long beach made of pebbles, very transparent and gradually descending, great for playing with children.

Having a villa with a swimming pool is ideal with two such small children.
In fact, in August the temperature of Rhodes is hot and having the opportunity to take a nice dip in the shade in the pool, without necessarily having to stay every day under the sun of the beach holed up under an umbrella, is really pleasant.

Days on the island

Our days were of two kinds. Those entirely around, with return for dinner / barbecue at home and those with an early wake up call, excursion to some new beach, return home for lunch and relaxation by the pool. Return to the sea in a new beach in the late afternoon and evening excursions in the surrounding villages.

Rhodes Island: the sea with children

A week is not enough to see everything and lie down on all the beaches, so you will have to make choices, especially if your pace is slowed down by those of two babies.

The sea of ​​Rhodes is made of clear and warm waters, ideal with children, and there are beyond 30 Blue Flag beaches for quality, cleanliness, etc.

In any case, I recommend you to absolutely see the following beaches.

On the east coast absolutely Antony Quinn's Bay, 15km from Rhodes town and the Ladikò bay, surrounded by pine forests and rocks.

The first is famous for the famous actor who fell in love with the island and this bay during the filming of Zorba the Greek (1964) and The Cannons of Navarone (1961). 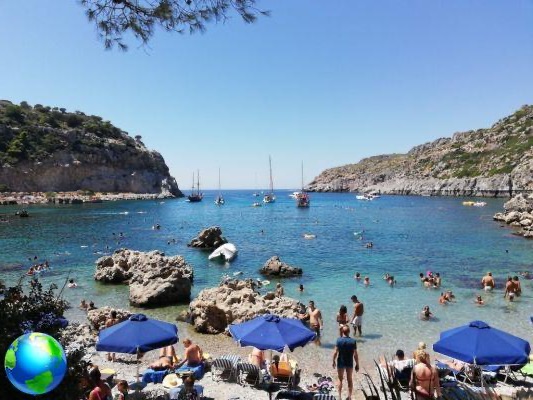 Still on the east coast, which is a continuous alternation of beaches nestled between the rocks, I recommend Aghati Beach, about 37km from Rhodes city and just above the city of Lindos, with golden and thin sand and the sea that remains knee-deep for many meters.

Tsambika Beach, relatively close to Aghati, always sandy, wide and very beautiful and, a treat for adults: you can also do parasailing if you like it and if you have someone who keeps your children for an hour.

Kalithea is located more towards Rhodes town, with a very particular bay equipped with sun beds and umbrellas, restaurants, as well as an ancient spa, worth seeing. 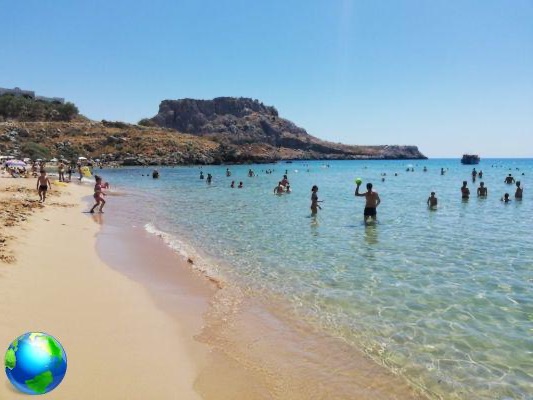 I recommend you take a trip to Prassonissi. Unfortunately I didn't succeed, but it must be very special because it is there, in the southernmost point of the island, that the two seas meet, Mediterranean and Aegean.

Spectacular, with that view of the white Acropolis, which I will talk about shortly, and the crystalline water that rests on a crescent-shaped beach.

Lindos Beach is also very suitable for children, equipped with everything and with shallow and beautiful waters.

But it is crowded in August in broad daylight, so I advise you to go there early in the morning (taking advantage of the alarm clock at dawn that your children will obviously have on vacation) or in the late afternoon.

The most evocative place in the Aegean

The same goes for the obligatory visit to his beautiful one Acropolis.

They say it is one of the most evocative places in the Aegean, which is about 50 km from Rhodes in total and consists of a steep cliff on which white houses stand out among the adorable alleys of the village below.

The visit to the Acropolis costs 12 € per person, small children do not pay, and the climb of the 300 steps is absolutely worth it. 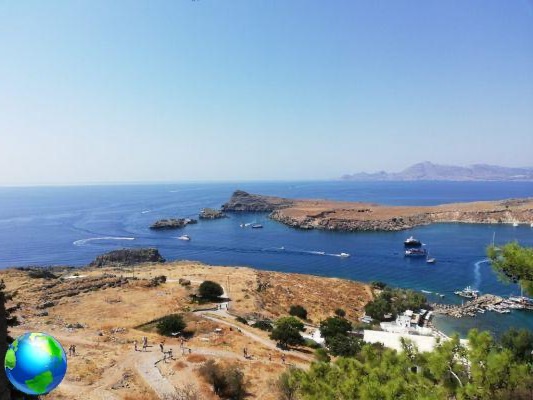 Another excursion that you can't miss is the one to the city of Rhodes, where I recommend you go in the late afternoon to enjoy the sunset, a romantic dinner in some hidden alley and the evening life.

Rhodes city is enclosed within a thick medieval walls and its alleys have remained almost unchanged over the centuries.

The most enjoyable activity, besides eating the local delights, is get lost along the streets of the center aimlessly and without direction. Its Acropolis is also worth a visit.
But even more suggestive are its ancient ruins and its history, from the ancient one to the occupation by the Knights of St. John during the Crusades.

Not to be missed in the historic center are via dei Cavalieri and the Palazzo dei Gran Maestri. 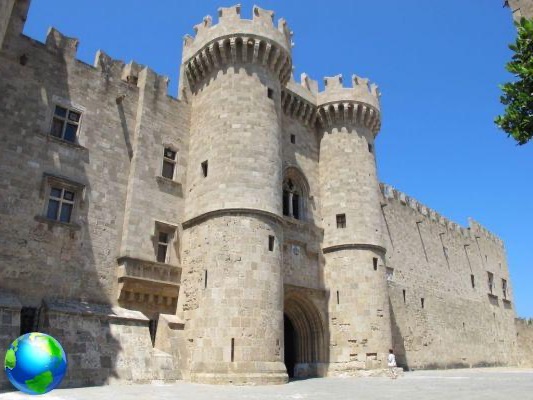 Obviously don't forget thegastronomic aspect of this trip, as the Greek food is excellent, so when you go there, I recommend, eat a lot of pita and tsaziki salza for me too.

add a comment of Rhodes Island: a week with children