Pizza at Il Rifugio del Buttero in Rome with Poinx 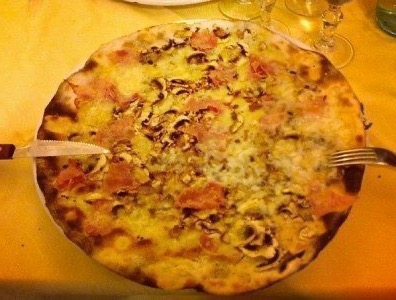 I have been for dinner at Il Buttero restaurant some time ago. The restaurant is located in the Nomentana area, more or less, forgive me but Rome I don't know it that well yet and I must say that from the outside the place looks really good.

The interior is very large and on a Sunday evening it was not very full but the waiters had their work cut out. Here I dined with a coupon bought on Poinx that with 18 € instead of 36 € gave me the right, to me and my companion, to two supplì, two bruschetta e two pizzas, ah in the coupon the water was included, I tend to specify it because in some it is not included and you must read carefully :)

What about the pizza was good, Roman classical a bit thin, the bruschetta was also delicious, the only thing that was a bit out of place was the supplì which I honestly didn't like very much. The service was fast and the welcome was warm too.

The restaurant gives the air of being one of those places that recently gave itself to the "practice of pushed coupons" :) since the other tables also had more or less the same things as ours, or the meat menu, another coupon glimpsed on Poinx, moreover i waiters they seemed to be very comfortable with coupons, let's say it wasn't the first time they saw one, that's it.

The restaurant as a whole is nice and mine menu for € 9 each it was more than that valid.