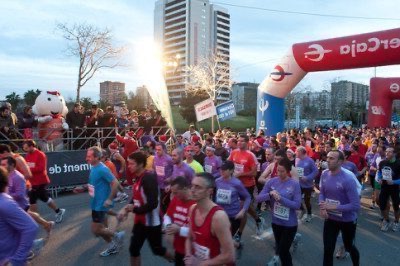 Are you sportsmen? Don't even stop at New Year? Do you travel the world in search of the next race? Then listen to this.

Every year a Barcelona takes place run of San Silvestro, however, called the Race of the Noses. The name of the race comes from an ancient tradition of Catalan mythology: L'Home dels Nassos, which it owns 365 noses and symbolizing the passage of time each day loses one, until it is left without the last day of the year.

It is a popular race of ten kilometers to cover in a maximum time of an hour and a half, which saw its dawn in 1999 and which last year reached the record figure of 10.000 members. Last year's edition broke all attendance records

This San Silvestre race is more a act of celebration a year that goes away and also takes place in other European capitals such as Berlin, London or Paris. These cities, as well as Barcelona, ​​are heirs of the first race in which the Christmas spirit was mixed with the sporting one: that of San Paulo in 1924.

The inscriptions they are not yet open, but generally they start in early December and close on the twenty-sixth day. The cost is really low, last year of only 13€ to which are added the 2 euros for the chip.

Information on : www.bcn.cat/cursanassos
Currently the information concerns the race on 31/12/11.