Nerja, Costa del Sol how to travel to Malaga 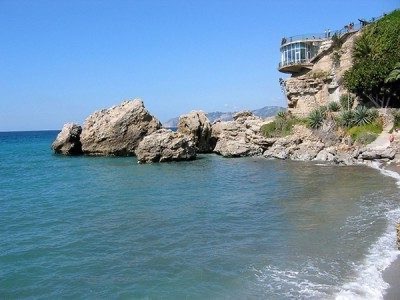 La Costa del Sol is the Mediterranean coast in the Southern Spain which is part of the Province of Malaga. This area has experienced in recent years a great mass tourism, and a consequent illegal building and environmental destruction due to the negligence in drawing up sustainable development plans ecologically and (to the test of facts) also economically.

At its eastern end, we find the Nerja village, one of the first in the area to develop mass tourism (thanks to advertising deriving from the TV series Verano Azul, a few decades ago), but which now makes a great impression compared to the surrounding area, from the points of view we were talking about above. Probably, the great fortune of the country is due to the morphology of the coast, a succession of small and medium-sized bays, interspersed with rocks that reach into the sea. In this way, it was not physically possible to build those rows of tourist structures of 10-12 floors that so characterize most of the towns and cities of the Costa del Sol.

The town of Nerja is therefore one expanse of housing relatively low and of small messy streets that gradually descend towards the sea, before the last "jump" which requires you to descend by means of ladders to reach the beaches. These are small in both length and depth, especially the more central ones adjacent to the Balcon de Europa, the large panoramic terrace overlooking the sea. If, on the other hand, you want a larger and more equipped beach, just walk east through the series of bays and get to Plaja de Burriana.

In order not to faint, it is appropriate to park in the highest part of the town and take a stroll (on the way back they are a little less pleasant because they are uphill, but it's worth it); the underground pay parking Balcon de Europa it is in fact decidedly inconvenient, unless you arrive for only half a day and have little time to waste.

Audio Video Nerja, Costa del Sol how to travel to Malaga
Texel, in the north of Holland: what to do in 3 days ❯

add a comment from Nerja, Costa del Sol how to travel to Malaga