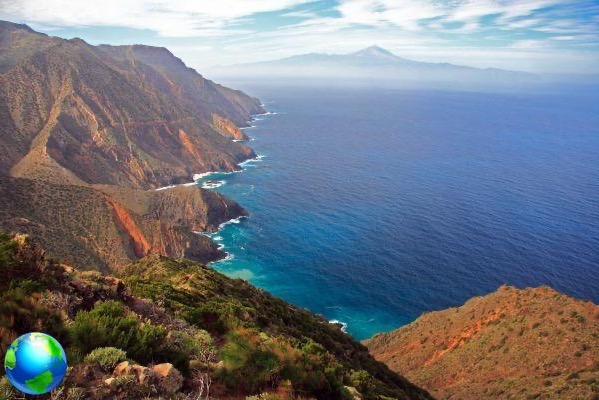 A handful of vacation days to do in March, a rainy period behind us (hopefully) and a winter that didn't even give the satisfaction of being such. The desire for a decent time is all there, but what if the days are not enough to justify a long journey to exotic destinations?

The islands are within a short flight (low cost) Canaries, a corner of Europe in the Atlantic, can guarantee an excellent solution for the period. If they are unanimously known as the islands of eternal spring, there may be a reason, right?
A Tenerife, the temperatures in March are very pleasant, between 18 and 27 degrees, with a degree of humidity that remains very low, as throughout the year. In the north, the climate is slightly wetter and windier, while in the south of the island, thanks to the protection of the mountains (in particular the Teide volcano, the highest peak in Spain), wind and precipitation are rarer.

As a warm destination for the winter, Tenerife has another nice advantage: we are still in Spain, therefore the European Union and the Euro zone, which means that we don't have to make any special documents before departure and we don't even have to think about currency exchange.

So also in my case I tipped the scales for the March choice towards Tenerife, reinforced by the opportunity to visit a dear cousin, who kindly offered me hospitality.

I will sleep, and I will base, a El Medano, a very convenient location at the airport where Ryanair stops (for which, given the slightly longer flight, I tried to book the seats with more legroom), or theTenerife South Airport, in the south of the island. The airport is the more recent of the two in Tenerife, the farthest from the capital, but the closest to the best-equipped tourist areas, and, as mentioned above, with the best microclimate, sheltered from winds and precipitation.
The idea of ​​the holiday will be to get some Relax and some tour of the island, by renting a car in one of the many cheap rentals that can be found here and there, to take advantage of the various possibilities that it can offer. In fact, if in the south equipped beaches, tourist villages, resorts, golf courses and nightlife clubs prevail, in the north the towns become more interesting and characteristic, with an important history and an indigenous population still tied to their traditions and lifestyles.

And to complete the multifaceted picture of Tenerife, it certainly should not be forgotten that in the center stands the Teide volcano (on which snow could also be admired in early February). Its summit can be the destination of pleasant and panoramic day excursions, as well as the whole area of ​​the Teide national park, with the landscape that varies between lunar and verdant.


Un 4-day program, subject to possible changes at the moment, could therefore foresee at least one day to visit the towns of the north, between the capital of Santa Cruz de Tenerife and the city of La Orotava, declared cultural and historical-artistic heritage; another day certainly for a hike to the national park and the summit of the Teide; the rest can be enjoyed in relaxation, or in the evening entertainment, in the south of the island, with trips here and there between a beach and a bay.
But the journey has yet to begin and surprises may be around the corner… Any other ideas?

add a comment of Tenerife, March in the Canaries, islands of eternal spring