Michele a country manager who tells us about Rome 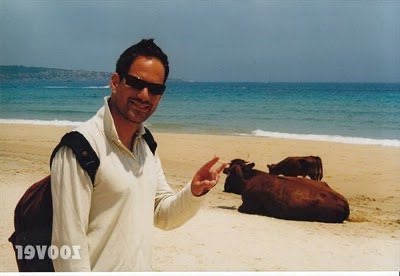 Michele Aggiato is Country Manager of Zoover Italia, ma not only, and today in his interview he explains how he lived in around the world (with and without children) and myzoover, new great element of Zoover.it

When (and how long) were you in Rome and why?
In 2005 for 4 months after being repatriated from Berlin. I worked for a travel agency on Via Goito, near Termini Station. A culture shock coming from Berlin. But the Rome of August remained in my heart, when the streets are deserted and you see a few tourists around, not too many because it's hot. In the fall I was going to get married. While I was struggling with a disastrous work ethic, my future wife enjoyed the city as a full-time tourist. Then I returned in 2008 for 1 year, again for work. But this time we were three: there was also Antonio my eldest son who is now 3 years old. We took home a Monte Mario near the Trionfale, a penthouse with a mega terrace. Unfortunately we caught the wettest year of the last 100 years (remember the flood of the Aniene del Tiber in 2009?) So I couldn't take advantage of it. Live in Rome with a child it immediately proved very different than when we were two. We were very well received by the parish of Our Lady in Guadalupe, good and nice people with whom we immediately made friends.

How did you find a home?
Well ... the usual home finders, rent.it, portaportese etc. the real estate descriptions were ridiculous: lovely apartment with open kitchen was a poorly furnished studio apartment. Finding a house near the center was too expensive. In my case I needed a Flat because with his wife and child in tow and unfortunately there was no way to avoid the agency, bank trust for the deposit, in short, everything more complicated in Rome.

Low cost ways to get around?
ATAC and train. From Monte Mario there is a train every 15 minutes that reaches Valle Aurelia, San Pietro, Trastevere etc. or the bus that traffic permitting takes you to Cyprus. Unfortunately the buses despite being effective for the levels of Rome often sank in general traffic, really pity.

Ways of doing that impressed you
I have known many people of heart, of a unique generosity. I was struck by the way it takes all lightly (or to be able to ignore): degradation, dirt, disorganization, mismanagement. And at the same time the aggressiveness in defend your city or their own actions as someone begins to criticize.

The easiest thing to do in Rome?
Eat and be a tourist: discover the museums, hidden attractions: trattorias, bars… a new discovery every weekend. Also in the surroundings there are many other jewels to discover how Frascati, Castelgandolfo, Bracciano, Cerveterior even on the coast. All reachable by public transport in 40 - 60 minutes. To eat I recommend Trattoria Der Pallaro Campo de Fiori area, Signora Paola cooks, no menu, fixed menu, easy-going and good, The boot above Villa Pamphili, Dar Poeta Pizzeria in Trastevere, Ciak where you have to taste the tagliatelle with wild boar sauce, however a great place to eat meat.

A city festival to recommend?
No party in particular. L'angelus: I found it very exciting to be in piazza san pietro praying together with unknown people all around, while the statues of piazza san pietro and the dome of the basilica looked at us from above. The Porta Portuense market in Trastevere.

A typical dish to recommend
THElamb with artichokes. All projects beer in Rome…. I prefer the white wine from the Alban hills or of course the frascati. A place to recommend or a bar to drink special café I recommend the Sant'Eustachio Bar behind the Pantheon and Palazzo Madama. Amazing taste and if you look at the people a little bit, you will see many politicians plotting in a low voice. Ironically, the father of a friend of mine from Monza, a DC senator, made me discover that bar. However, the place is always super crowded.


A beautiful wine shop I find it to be Giulio pass me the oil in via monte giordano and finally the Bar del Fico naturally in piazza del fico. A good ice cream can be found behind the pantheon at the la palma ice cream shop (in my opinion, however, the real secret is their dark chocolate mousse)

The most expensive thing
A dinner on the terrace of the Hotel Eden and a Capuchin sitting at the bar in Piazza del Popolo. I didn't have the courage to look on my account or even on my credit card statement, but it was no small feat since they blocked it for 1 month.

The lowest cost thing
Make yourself beautiful mortadella sandwiches, then buy two fresh beers in via santa dorotea (greengrocer and pizza by the slice) a Trastevere then walk up to the giannicolo. Then sit on the lawn under a tree and enjoy the sandwich and beer. Nearby is the entrance to botanical gardens of Rome, not to be missed. being able to be a tourist every weekend.

A positive thing about living in Rome
Being able to do the tourist every weekend.

A bad thing about living in Rome
Le roads too narrow and inadequate for the monstrous amount of vehicles on the road.

Would you recommend it to a friend as a city to live in?
With children absolutely not. If you are alone or in pairs it is a fabulous city.

Audio Video Michele a country manager who tells us about Rome
Working while traveling: how WHV Australia works ❯