Medici villas in Tuscany, 14 sites in one itinerary

In Tuscany there are Medici villas and gardens which have recently been a UNESCO World Heritage Site, here's how to visit them all at low cost.

Le Medici villas area of Tuscany. have been included in the list of sites World Heritage Site by UNESCO in 2013. It is a serial site, that is, made up of different places, to be precise fourteen of villas and gardens that the Medici family had built for its use and which came to us as a testimony of these lords of Tuscany, as powerful as they are lovers of beauty. 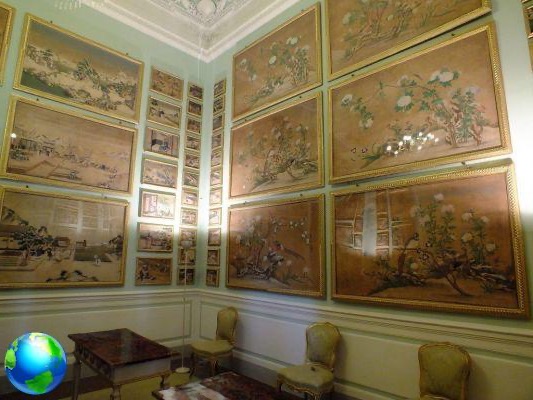 Build an itinerary on these 14 sites it is not trivial, because they are found in different places in Tuscany. I believe none of you will come with the intention of seeing all the villas, but you can certainly add them to the list of things to visit if you are on holiday in Florence or in other places in the region.

In fact, some of these are museums in all respects, with regular opening hours. Others are private and the lucky owners can decide whether or not to open the doors of their historic mansion to the curious who want to visit it. In other cases, alas, the villa is closed to the public for different reasons and all that remains is to admire it from the outside. But let's go in order.

The villas of Petraia, Castello, the Boboli Gardens, Poggio Imperiale and the Villa di Careggi are in the municipal area of ​​Florence. The first three are places that any tourist can visit, with regular opening hours there Villa of Careggi it has been used for different purposes (such as offices) for years and is now under restoration. The fact that the villas of Castello and Petraia, which are located on the western outskirts of the city, have always been a destination for Sunday walks for my family makes them so familiar to me. Meanwhile you should know that speaking of Villa La Petraia it means the possibility of visiting both the park and the villa. Inside the furnishings are from the nineteenth century, in fact King Vittorio Emanuele, in the five years in which the capital of Italy was in Florence (1865-1871, this year celebrates 150 years) very much appreciated this place located high up on the " flat ”to the north-west of the city, together with the“ beautiful Rosina ”. There villa of Castello it is a few hundred meters away, but here you can only visit the garden, the villa is the seat of the prestigious Accademia della Crusca and can only be visited with guided tours, on the first Sunday of the month, by reservation. However, "only the garden" is an understatement and inexact: it is a splendid Italian garden, with a surprising collection of citrus fruits. 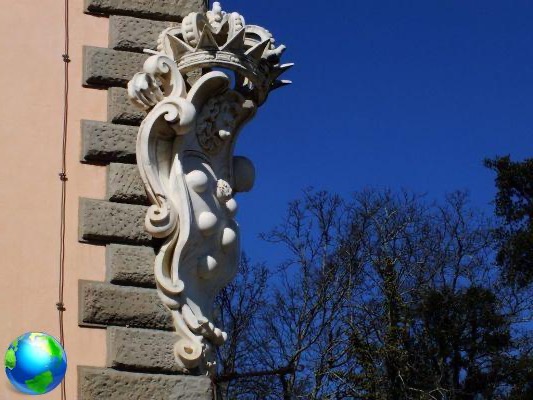 The villas of Florence and of Mugello they were commissioned by the first important figures of the family, by Cosimo the Elder and Lorenzo dei Medici and in some cases they literally “dripped” with the history and culture of our country. For example, Marsilio Ficino, Agnolo Poliziano and Lorenzo gathered at the Villa di Careggi.

Surely the site best known to the general public is the Boboli Gardens, which is part of the museum itinerary of Palazzo Pitti. As a historical reference it should be connected to the sixteenth-century and grand-ducal period of the Medici family, when Cosimo I moved to the Pitti palace as Grand Duke. The garden was mainly followed by his wife, Eleonora da Toledo.

The property of the Medici Grand Dukes of Tuscany is also part of Villa of Poggio Imperiale, which stands at the top of the avenue of the same name. The villa is famous because it houses a boarding school where in the past the most noble girls in Europe studied. Even today there is a school with boarding school. It is the students themselves who conduct the guided tours, which are done at certain times of the year. If you have the opportunity try to go, because the villa has very interesting environments, from different periods for example the "Chinese quarter" is furnished in the oriental fashion in vogue in the 18th century. 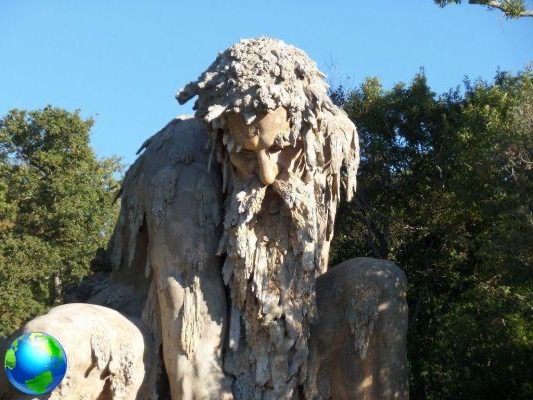 Sixteenth century is also the second garden on the list after Boboli, the Mediceo Park of Pratolino. We are 15 minutes from the center of Florence, along the via Bolognese, in Pratolino. A villa with park, a magical and fairytale place, conceived and wanted by Francesco I for his lover Bianca Cappello, created by the brilliant Buontalenti. The Medici Villa that was located in the center of this vast park no longer exists, in fact it was demolished in the nineteenth century because it was in ruins. In the park it is possible to trace the signs of the numerous and amazing water games that characterized it and aroused the wonder of visitors. The colossal and spectacular statue of the Giant of the Apennines, made by Giambologna, remains, testifying to its former splendor. This alone is worth a visit!

But since the origins of the Medici were Mugello, the very first villas of the family are in Mugello: the Trebbio Castle and the Cafaggiolo Villa. Unfortunately both are privately owned and therefore cannot be visited; they look like a fortress, with large towers and battlements. It is also private Villa Medici in Fiesole, the city on the hill of Etruscan origin that overlooks the city of Florence: residence of Giovanni dei Medici, second son of Cosimo the Elder. A typical suburban villa in an enviable position and with beautiful terraced gardens; the owner family is however open to visits by appointment. 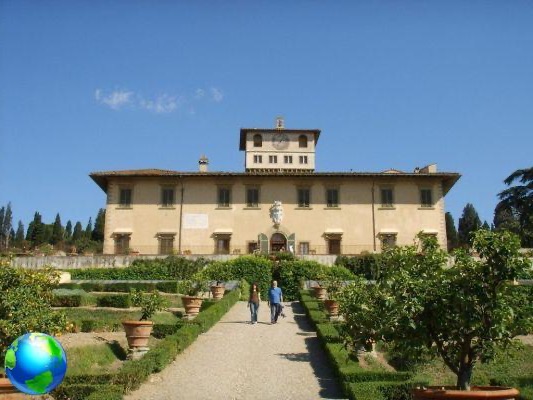 We then leave Florence. If we move west, following the ancient road that led to Prato, we find two other beautiful villas. The first is located in the country of Poggio a Caiano, right in the center. It is an elegant villa, commissioned by Lorenzo the Magnificent who however died 7 years after the start of the works; taken up by his son, Pope Leo X was completed in the sixteenth century. The villa hosts an interesting Museum of Still Life, where you can admire dozens and dozens of paintings on the theme of still lifes, with particular emphasis on the types of plants and fruit particularly loved by the Medici, such as citrus fruits.

A few kilometers from there, in the village of Artimino is instead the Villa of Artimino, a private property used for banquets, weddings and meetings. The villa can be visited upon reservation. It has a powerful appearance with the four reinforced corners and the roof literally dotted with chimneys. It is also known as a villa with a hundred chimneys or "La Ferdinanda" as Ferdinando I dei Medici commissioned Buontalenti to build it. The villa is close to the Barco Reale, a hunting reserve that the family had on Montalbano, a mountain that separates the Arno Valley from the plain between Florence and Pistoia. 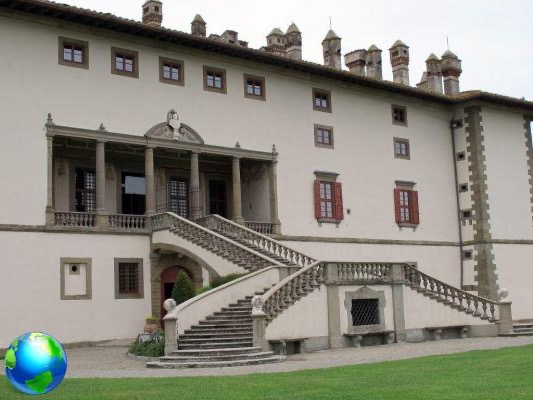 And linked to Montalbano is also the other villa-museum, that of Cerreto Guidi. This rises in the center of the town of Cerreto Guidi, and is famous above all for the murder of Isabella, favorite daughter of Cosimo I dei Medici, who was killed by her husband Paolo Giordano Orsini on July 4, 1576. Do you love hunting? This is the right place for you, in fact inside the villa there is a Hunting and Territory Museum which testifies to the Medici family's passion for this activity.

There are still two villas: the first is Magic, which is located in Quarrata, in the province of Pistoia. This villa dates back to the fifteenth century but was greatly modified during the eighteenth century. The garden that surrounds it is also from the eighteenth century, in fact at the time of the Medici the villa was surrounded only by woods and cultivated fields. It also had a lake nearby (it no longer exists today) which was used by the Grand Duke for fishing, a feature that also unites the villa of Seravezza. The latter is the farthest from the center of the Grand Duchy, Florence, it is in fact located near the Versilia coast. 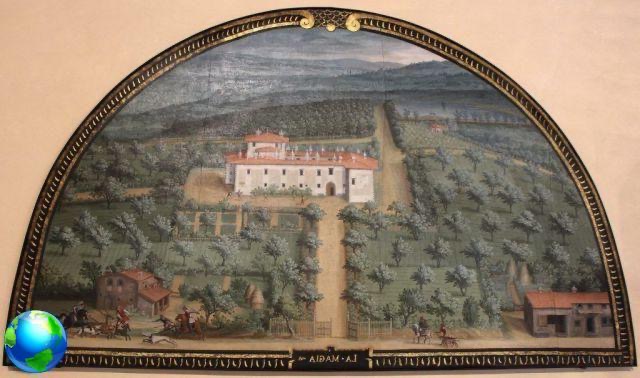 Il Seravezza Palace it has a severe architecture, perhaps attributable to Ammannati it was much loved and frequented by the Grand Duchess Christina of Lorraine who came here to fish; but above all this palace was to serve as the temporary residence of Cosimo I during his frequent visits to the silver mines in the area and the marble quarries.

To actually visit these villas, which often have free admission, I indicate all the necessary contacts:

La Villa del Poggio Imperiale (in Florence) can be visited according to the indications of the website of the State Boarding House of the Santissima Annunziata.

Il Mediceo Park of Pratolino (in Pratolino, Vaglia) is open from the end of April to the end of October, at the weekend as reported on the official website.

La Villa of Careggi (in Florence), la Villa of Cafaggiolo (in Barberino di Mugello) and the Villa del Trebbio (in San Piero a Sieve) are not open to the public.

La Villa Medici (in Fiesole) and the Villa of Artimino (in Artimino, Carmignano) can be visited by appointment.

La Villa La Magia (in Quarrata) is open on special but frequent occasions, as indicated on the site.

Il Medici Palace of Seravezza (in Seravezza) is open regularly on weekends as indicated on the site.

Audio Video Medici villas in Tuscany, 14 sites in one itinerary
Salerno, where to eat the best pizza ❯

add a comment of Medici villas in Tuscany, 14 sites in one itinerary