How to get around by subway in New York: lines and map

The subway in New York, called the “subway”, is the quickest and cheapest way to get around, but it's true that if you take it for the first time, it can seem a bit complicated to use. Here are some tips for getting around easily by subway in New York.

The New York subway is a major mode of transportation for most New Yorkers and tourists. It was one of the first networks in the world to offer an underground connection. Since 1904, this network has grown strongly and today it has 469 stations, that make 24 different lines.

Precisely because it is so old, this metro has some drawbacks, such as the fact that the stops are small and poorly maintained. But, even if the subway looks a bit old, there is still one wifi access in a very large number of stations.

The metro system is usually called "trains". The subway is never called metro, underground, or tube.

Nothing to say about the safety in the subway: Even in the quietest hours of the night, the lines that circulate in Manhattan are generally safe. During the day, there are several police officers (mainly in the large stations in the city center). Of course, you should always beware of pickpockets.

How the subway works in New York

The street grid in Manhattan

The subway map in New York

Once you understand how it works, the New York subway is particularly effective. Therefore we advise you to download the subway map. You will only have to print it before departure (it is better to print it in color). 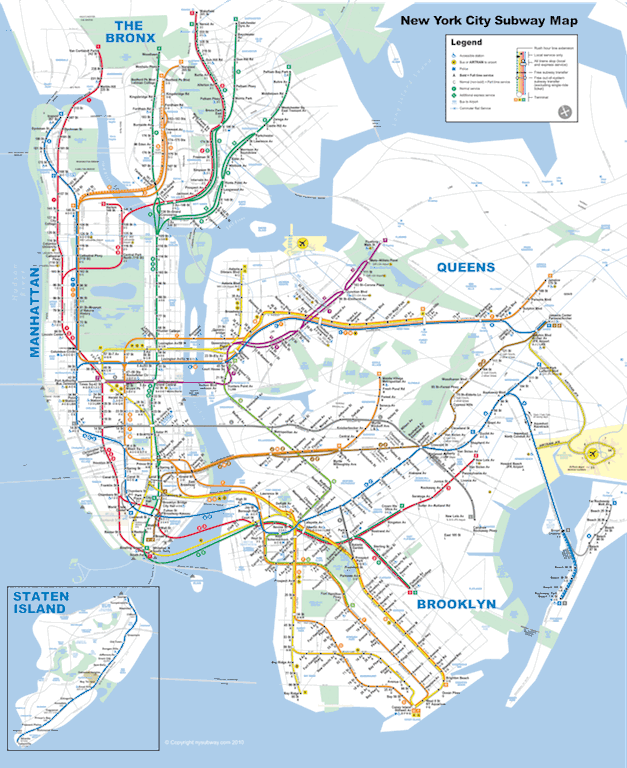 The subway runs through Manhattan, the Bronx, Queens and Brooklyn via its 24 lines, identified by colors, as well as numbers or letters. The service is provided by the Metropolitan Transportation Authority (MTA).

As you can see, no subway lines leave New York and there is no physical subway connection from Staten Island to the rest of the subway system. To move out of the city you will need to take one of the commuter trains.

Manhattan can be divided into three areas:

While Uptown, Midtown, and Downtown are geographic regions of Manhattan, the words uptown and downtown can also mean the direction of travel. If you are heading north or towards the Bronx or Queens, it means that you are headed uptown; if you go south or to Brooklyn, that means you are headed downtown.

The New York subway operates 24/24. However, there are some stations that close at night. But rest assured, all tourist spots remain served, especially in Manhattan. Sometimes, especially on weekends, some stations are closed for construction, but in these cases they are shuttles available or a solution is offered.


The frequency of the subway in New York changes according to the hours and times of the year. At rush hour, we see a train 2 every minute approximately. Outside these hours, the subways run every 10 - 15 minutes. At night, the metro runs every 20 minutes on average.

To recognize the subway stations, just locate the black plate with the words "Subway”Or the one with the name of the station and its lines. You can also spot them with two green balls, illuminated at night. Some large stations, on the other hand, are different, such as large halls you enter: Times Squares for example.

Attention, the same station usually has two entrances: one for Uptown (to go north), the other for Downtown (to go south), so you have to be careful not to go wrong depending on the destination you want to go to. The two entrances are often next to each other or on opposite sidewalks. However, it is also possible to find stations with the same entrance for both traffic directions. It is therefore necessary to look at the sign at the entrance to the station.

The 24 lines are identified by colors, as well as numbers or letters. As we said a little earlier, the direction of the lines is not indicated by their terminus but simply Uptown: which goes up towards the north, e Downtown: coming down from Manhattan and heading towards Brooklyn.


It is important to know that: 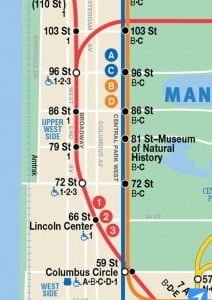 Let's take the example of the red line, which includes lines 1, 2 and 3, and we know that trains don't stop at the same stops. For example, line 1 stops everywhere, which is not the case for lines 2 and 3, moreover, the lines separate at a given time and take on different directions. So how do you know which line to take?

Just look on the map and look for the name of the station you want to arrive at - the number or letter of the train serving this station is marked next to it.

Also know that several lines can pass on the same platform, then look at the signs indicating the trains arriving to find out if it's yours.

It also happens that some stations, like Canal Street, are simultaneously on the red line, the blue line, the yellow line and the green line. 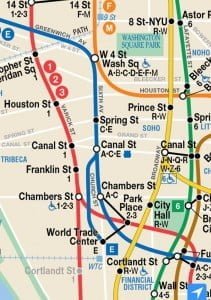 Again, the subway map will be useful to take the correct line (color and number) and reach the desired destination. Even though it is the same station (Canal Street) the stations of the different lines are not in the same location.

A solid black line between two stations means that there is a physical passage (usually a tunnel) that allows you to move between the subway lines without exiting the subway system so without swiping your MetroCard again. 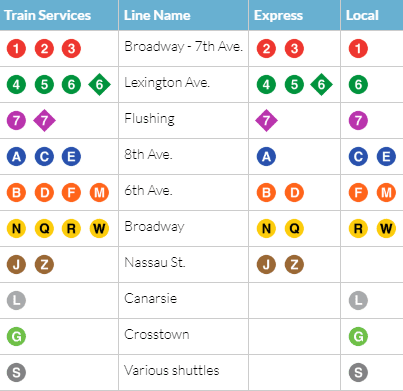 Within each line, there are a few trains which are each indicated with a single letter or a single number. For example, within the "blue" 8th Ave line there are three trains which are A, C and E. They are grouped in the "blue" line, because they share a common tunnel / road at some point in their journey (8th Ave ). However, these three trains have different departure and / or arrival stations.

All subways in New York don't necessarily stop at all stops… That's why there are two types of trains o metro: all lines have express trains and local trains.

This system is quite useful during rush hour, because with express trains the journey takes much less! But how do you know where express trains don't stop?

To orient yourself, you will need to find the points that mark each station:

Unlike many other subway systems around the world, for the subway in New York you pay the same fare regardless of how far or how long the journey is. The cost to go from one station to a nearby station (for example, a one-minute journey) is equivalent to traveling from one end of the map to the other (which could take two hours).

In order to use the metro, you need to buy a ticket, called Metrocard. Metro tickets are on sale at most stations and can be purchased through vending machines. You can pay by credit card or cash.

What are the different types of tickets?

A Metrocard it can operate in two modes: Regular e Unlimited Ride. Physically, the card looks identical regardless of how it operates. There is also a Single-Ride ticket of $ 3 but it is not cheap to buy it. Regardless of the type of MetroCard, you pay $ 1 just to purchase the card.

The single use ticket (SingleRide ticket) costs $ 3 and allows you to travel by subway or bus within 2 hours of purchase. Please note:, does not allow you to go from the subway to the bus or vice versa.

It is valid for 7 or 30 days, allows unlimited travel and can also be used on public buses. If you plan on doing more than 12 individual trips (a very likely scenario for tourists staying more than two days), purchasing a 7-day Unlimited Ride card will be cheaper than paying 12 times.

Regular MetroCard (also known as Pay-Per-Ride card) which can be recharged at will. If you load more than $ 5,50 on the card, you will receive a bonus equal to 5% of the amount reloaded. The purchase of the MetroCards costs $ 1.

It doesn't work like in Spain: you don't have to enter your card code. The code you will be asked for is a postcode. So, to buy your MetroCard:

The first 3 steps are the same and in the 4th step: choose Cash The small MetroCard vending machines do not accept cash. Cash can be used on large machines. These machines can only return up to $ 9 in cash (paid in $ 1 coins).

How to visit Alcatraz: prices and timetables ❯

add a comment of How to get around by subway in New York: lines and map