DIY holidays in the Sporades Islands: what to see, what to do and the most beautiful beaches

The Archipelago of the Sporades Islands treasures precious places of rare beauty rich in history and ancient traditions. Here is a very interesting travel story that will introduce you to some of the wonders of Greece. 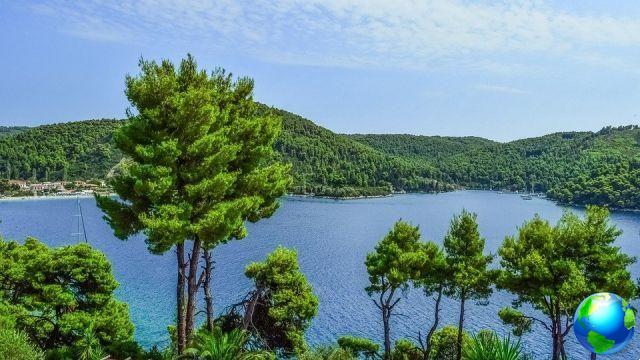 Sporades Islands where they are and information

Before telling you how we organized the DIY holidays in the Sporades Islands, or rather holidays low cost, I want to give you some information on this beautiful archipelago of Greece.

These extraordinary islands that I highly recommend to "walk" them all, are characterized by a unique picturesque charm, the wild and uncontaminated nature reigns supreme and the sea postcard and the beaches heavenly are the true essences.

Sporades Islands Greece: attractions and tips on what to eat

We were at Sporades Islands the summer of 2019, the first two weeks of July.

What we booked was the round trip flight only Skiathos.

Once you get to Skiathos we took the hydrofoil and in almost two hours we arrived in the splendid Alonnisos where to find accommodation was very simple in fact at the Port of Patitiri there were many people who offered rooms for rent and we were convinced by a nice old man who could only say 'room' and who gestured us to understand that the cost it was 25 € per night.

We followed him and our choice really rewarded us.

We settled in a small, clean, basic room with air conditioning and a balcony overlooking the harbor.

The next day we rented a scooter for 4 days for 80 €, it is essential and very comfortable but you need a lot of attention because the roads are well asphalted but it's all going up and down, there are many hairpin bends and some stretches that lead to the beaches they are made of beaten earth, so it is better to avoid small displacements, otherwise you have to push.

We have always taken scooters with large wheels and 125 displacement and have never had any problems. 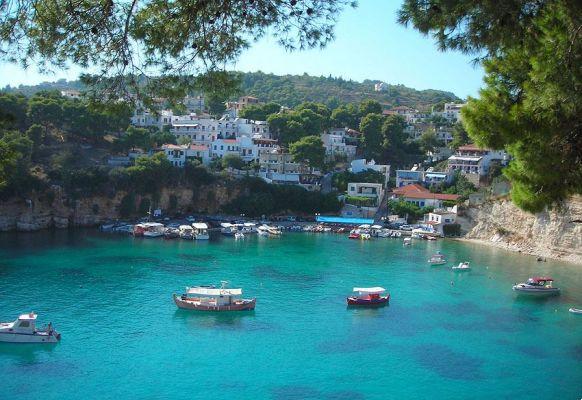 Most beaches they are all with pebbles, the most beautiful ever for us is Agios Dimitrios where calm reigns supreme and you just find the little man who rents two sun loungers and an umbrella for € 8.

There is a small bar which sells ice cream and some sandwiches but it is better to organize yourself and bring at least water and fruit, for the rest it is a true paradise. 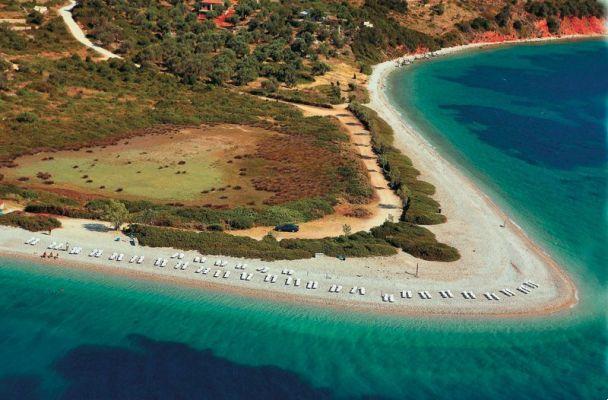 Another beautiful beach is that of Leftos Gialos, here is the typical Greek tavern where it is a must to taste fish and in particular the Alonnissos tuna: dish with a unique taste.

The only sore point is that at certain times the ships that go around the island arrive and the beach is attacked by noisy tourists eager to dive into the crystal clear turquoise water.


The Beach of Chris: Thousands little convinced us while that of Kokkinastro we didn't get to see it.

Unfortunately, in addition to always eating, in the evening there is not much to do, or you can take a walk in the small Port of Patitiri or go to the charming old town.

There are bus connections but if you are a couple of people waiting at the bus stop, you should agree and take a taxi all together; the ride costs around € 5.

With the scooter it is better not to be too late for the return, the road has bad lighting and sometimes missing.

The old city has its own charm, it is small, it is located on a promontory and offers a spectacular view; in short, something unforgettable.

Ad Old Alonissos there are local craft shops, restaurants and a couple of places to drink and eat sweets or savory pies while listening to strictly Greek music. 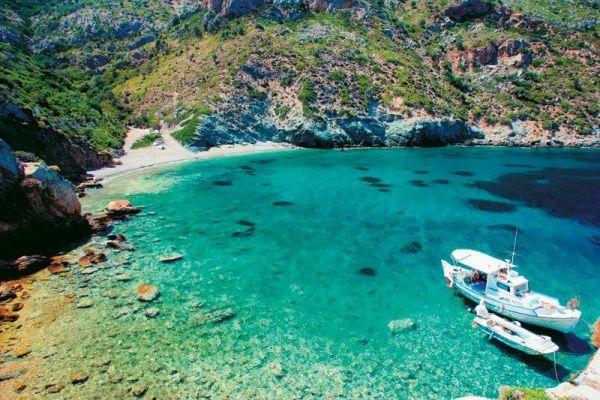 After the peaceful and relaxing Alonnissos we moved, always with the hydrofoil a Skopelos, I seem to remember that the ticket costs around € 14.

Here too, upon our arrival, we found someone who offered rooms and we turned to a nice and elderly Greek who took us to his hotel, just outside the center, where we slept for 4 days always paying € 25 per night, large room with huge bed, bathroom not brand new but functional, balcony and essential air conditioning.


Skopelos is the Queen of the Sporades Islands, it has a beautiful and long harbor promenade full of restaurants, cafes, shops of all kinds but it is also nice to get lost in the alleys that lead inside. 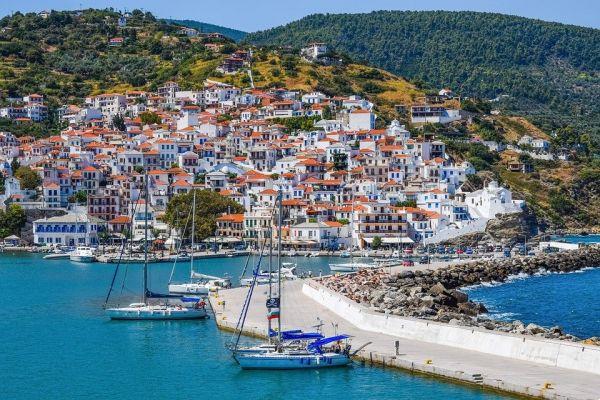 Here too we rented the scooter that led us to discover the beaches of Staphylos, Limnonari and the beautiful Panormos.

Usually for lunch we organized ourselves or with the classic Greek salad or with fruit; so much was recovered in the evening.

The paradox is that to have a breakfast you spend € 10 while for a grilled sea bream (chosen at the counter) with a generous side dish you pay € 7!

If you like Greek yogurt there is nothing better than starting the morning with a nice fruit salad with yogurt and Skopelos honey that has an almost pine aftertaste, it may not sound very inviting but the flavor is unique as well as honey. balls, pancakes covered with honey; a show and says a person who does little with honey.

Very famous is the Skopelos cake, a roll of phyllo dough stuffed with cheese, not bad but it is definitely a good beating to the liver.

I found very few good coffees or cappuccinos and honestly I preferred to take the Greek coffee which, although not filtered, at least tastes like coffee, otherwise Nescafè shaken coffee is the most popular. 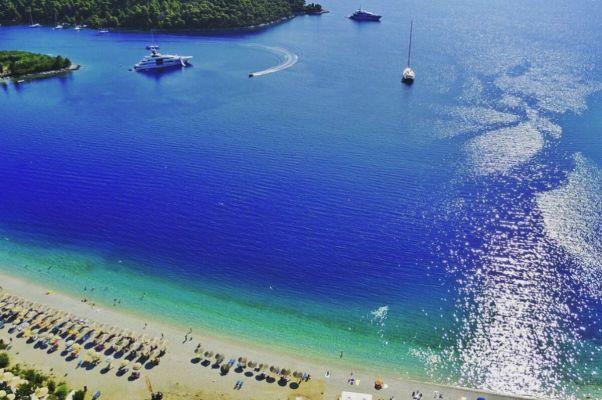 After Skopelos we went to Skiathos, again by hydrofoil, to end our holiday alas.

THESkiros Island, despite being the largest in the archipelago, we decided not to visit it.

Arriving at the port we met a very nice lady who took us to her house and with 43 € we slept in a completely renovated room also equipped with a kitchenette, the best accommodation ever, the initial price was 47 € but Luigi when you put it you can always get some discount.

Skiathos is the most touristic island of the Sporades and consequently also the most expensive.

Bella is beautiful but we are a bit refractory to the casino of tourists and here there are many and we were in early July.

Once we rented the usual scooter, a great "friend" of this unforgettable holiday, we went to discover the famous ones Skiathos Islands.

They are beaches e coves almost to every corner of the island and all within easy reach.

We had read that the beach of Koukounaries it was the most beautiful of the Sporades and so we immediately headed there. 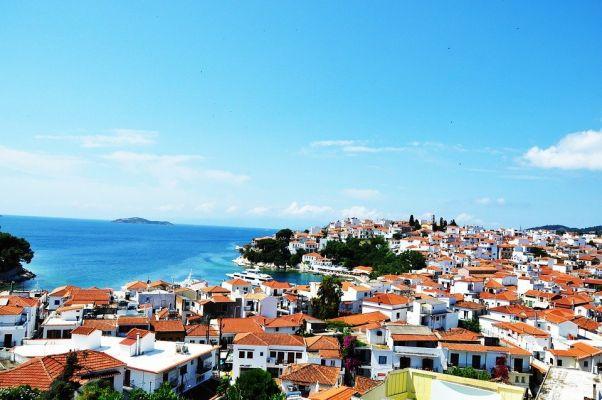 Koukounaries it is one of the few sandy beaches, rich in vegetation, emerald waters and very well equipped… but it was super crowded.

The setting is really beautiful but after two hours we couldn't wait to leave because of the loud music, the screaming people, the definitely not clear water and the very limited spaces ... a whole other dimension compared to to Agios Dimitrios o Panormos!

After this unpleasant experience we decided to divert ourselves to the discovery of less accessible beaches.

One day we ventured to discover Mandraki.. almost an hour and a half of dirt road with the constant fear of falling from the scooter or that the latter would abandon us uphill.

Arriving in Mandraki we felt the sensation of being a survivor of a shipwreck… there was nothing… only the beach and the sea… a spectacular view!

Staying in the sun was impossible, it was too hot but despite being a remote place .. there is a tavern. 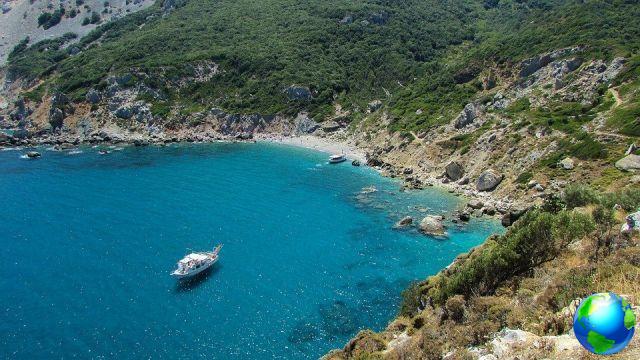 A sort of mirage where you can find refreshment under the shade of the portico while eating a nice Greek salad.

On the way back we found an indication for the Agios Eleni beach and after having necessarily left the scooter on the road we followed the directions to go down to the beach, getting off is easy but going up is a bit difficult, we arrived in this small cove with golden sand, equipped with a bar and in total there there were only 6 straw umbrellas and 12 sun loungers… a little paradise!

Le beaches they are undoubtedly very beautiful but the discomfort is that it takes three hours to reach them and what's more, for me, it was three hours of anxiety.

We spent the last two days at sea on the golden sand of Banana Beach less crowded but of equal beauty.

The day of departure we moved very early to take the microscopic charter that took us to the Athens airport where we spent almost four hours wandering around the shops and sadly waiting for the flight that brought us home.

Le islands of Greece they still remain a very affordable destination, the most important expenses were those relating to travel but to sleep and eat you really spend a lot of nonsense!

The Greeks are incredibly friendly and the places are so wonderful that they deserve, at least once in a lifetime, to be visited. 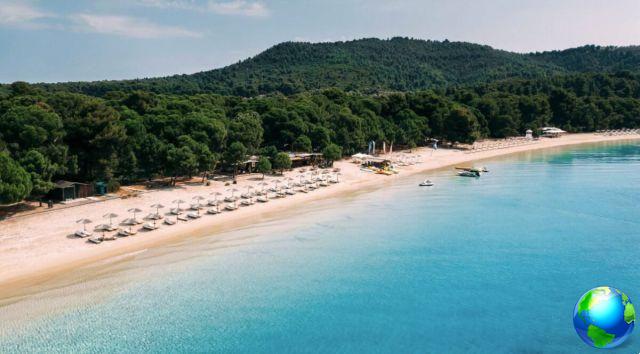 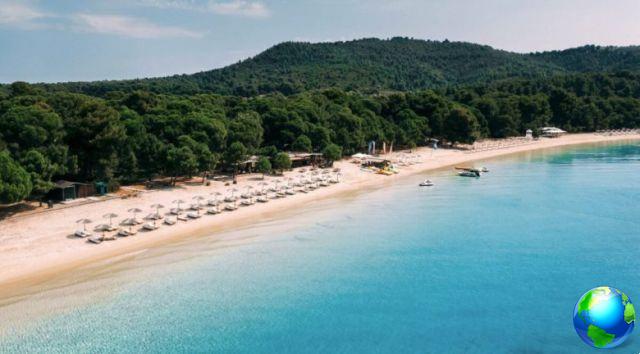 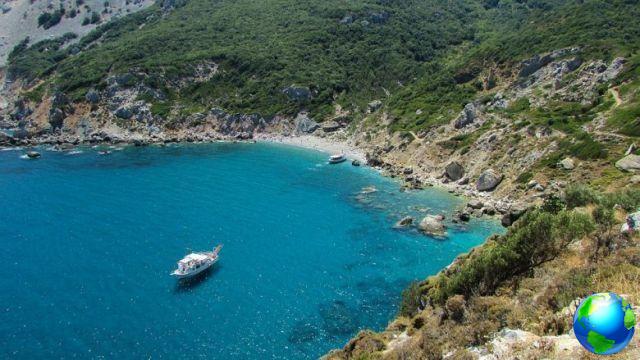 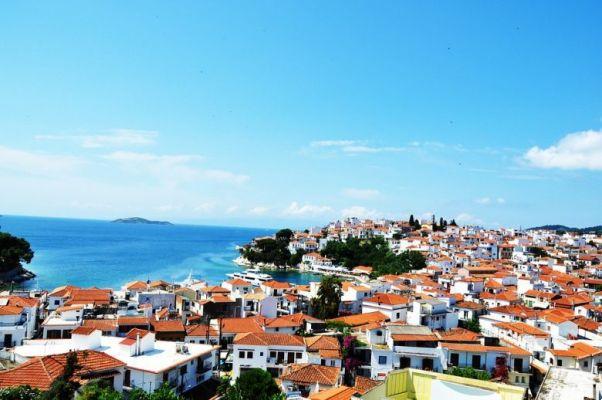 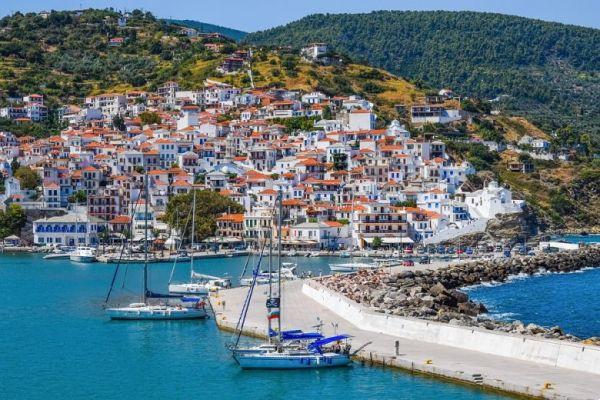 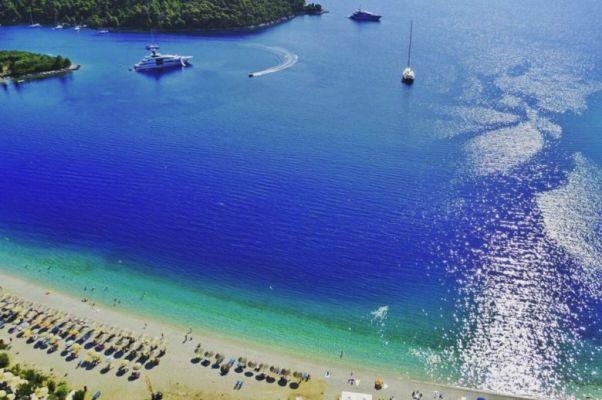 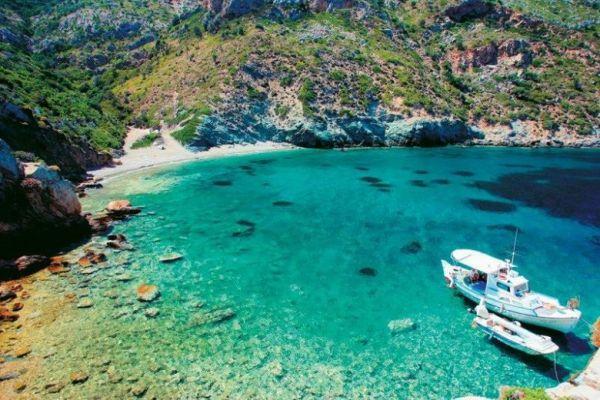 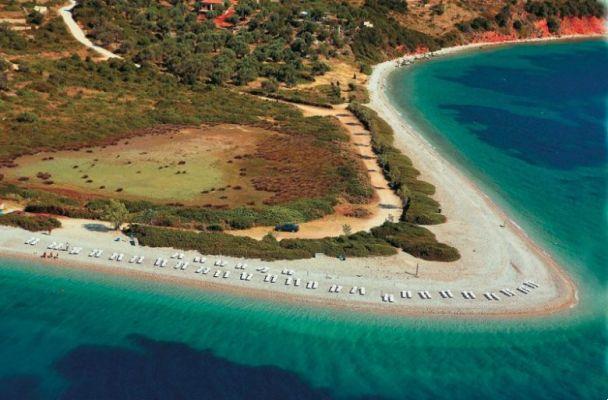 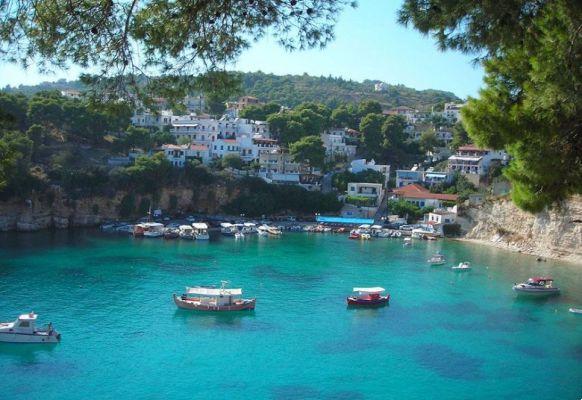 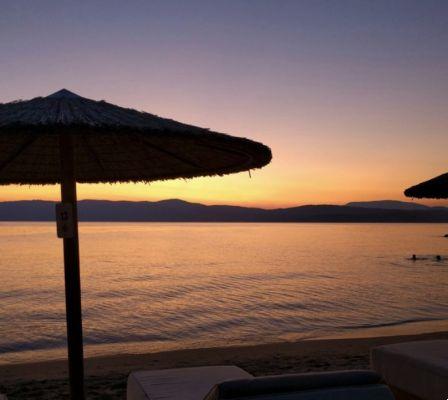 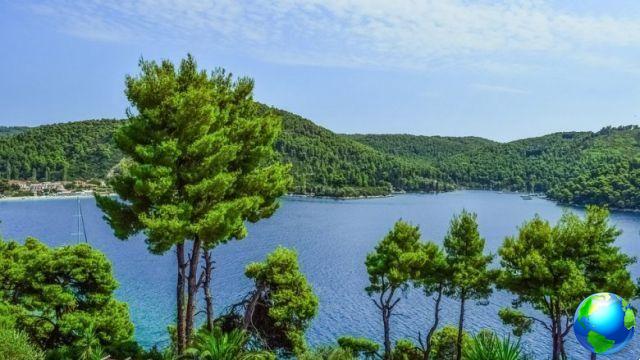 add a comment of DIY holidays in the Sporades Islands: what to see, what to do and the most beautiful beaches